Ed touches on a wide range of topics in this week's Valentine's Views.

Share All sharing options for: Valentine's Views: Helmets, T-Shirts, Promos ... and Some Football

The NFL is -- rightly -- focusing more and more on player safety. There is less and less practice time at the professional level, and little to no real contact when teams do practice. There is more and more emphasis on taking hits to the head out of the game, and limiting dangers on plays like kickoffs. There are rules in place now to force players to wear knee and thigh pads many have foolishly discarded in recent years. There is more focus on and better guidelines for dealing with concussions.

Some of these things are great, some are still tough to swallow. Some of the hits that are penalized now make you shake your head and wonder what sport they think they are playing. And the way teams tip-toe around each other on the practice field, with coaches going berserk whenever anyone actually gets knocked to the ground, makes it clear why tackling is terrible nowadays in the NFL. Also, it makes you wonder how players can prepare to play a contact sport when they very rarely -- if ever -- experience contact while practicing.

You want to take leading with the helmet while tackling out of the game? Then why is the football helmet still a huge, heavy weapon players can use to inflict damage on an opponent?

In a recent article on NFLEvolution.com, motorsports innovator Bill Simpson discussed his efforts to change the way football helmets are built. Simpson, according to NFL Evolution, "has been at the cutting edge of safety improvements for nearly every major circuit of auto racing."

"The sport of football needed something different than what they have," Simpson recently told Andrea Kremer, NFL Network’s chief player health and safety correspondent. "That was driven home to me when I went to my very first football game three years ago and they took a couple of guys off the field that had been knocked out.

"I really didn’t understand that. And I got a couple of helmets that NFL players were using and brought them back to my shop. I did some drop tests. The results that I saw were pretty appalling."

Simpson's helmet reportedly weighs less than three pounds. Kremer asked Simpson if he believed he had created a safer helmet. "I know I have," he said. "There’s no doubt in my mind."

None of what I have written here is meant to be a slam against Riddell, Schutt or any of the other top helmet manufacturers. I do know that helmets are changing in an effort to limit concussions, including changes to face masks, padding, size and more. The sheer weight of them, however, still bothers me.

I don't know if Simpson has developed a safer helmet. I do know that something different needs to be done, and it sounds to me like Simpson is -- at the very least -- on the right track.

Clark Judge of CBS Sports has spent time this offseason talking to people around the NFL about the read-option offense, and the majority opinion seems to be that the read-option won't last.

"I don't think it stays," said Cincinnati coach Marvin Lewis, defensive coordinator of the 2000 Baltimore Ravens. "A young quarterback can do it, OK? But that young quarterback will never get a second contract because he's going to be beaten up. And you can't be a passer and take hits on your shoulder like these guys are going to do getting tackled."

Personally, I believe the next couple of seasons will tell us a great deal. I think it has been shown that with the right quarterback the read-option can work in the NFL. I think, though, that teams will become more reluctant to get their quarterbacks hit, negating much of its use. 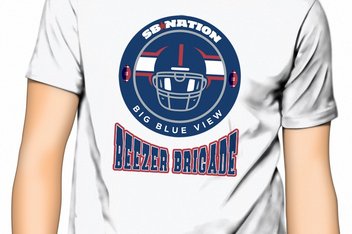 Training camp is less than two weeks away. Between now and then we will finish our player-by-player breakdowns, have a look at some of the position battles to watch, break down the Giants' NFC East rivals, run a couple of mini-camp interviews we still haven't gotten to and -- hopefully -- get to some positional overviews. So, stay tuned. Things are just about to get interesting.