Spencer Paysinger is next as we continue our player-by-player look at the Giants' roster.

Spencer Paysinger has been a bit player on the New York Giants defense the past two years, making most of his impact on special teams. The undrafted free agent from Oregon might be able to change that this season, however. As we continue our player-by-player breakdown of the 90-man roster the Giants will bring to training camp it is time to focus on Paysinger.

Paysinger: LBs will be fine 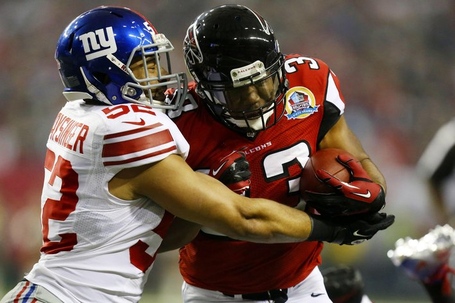 Spencer Paysinger told me recently the lack of big-name linebackers is no big deal for the Giants.

Paysinger had 39 tackles in 2012. He played 137 defensive snaps, 67 of those in the final three games when his role on the defense expanded as he took many of the snaps that had previously gone to veteran Michael Boley. Pro Football Focus graded him at +0.9, including +1.6 vs. the run. Paysinger also benefitted from Jacquian Williams being limited by a knee injury. Paysinger led the Giants with 16 special teams tackles.

Whether he wins the starting weak-side linebacker job, where he is competing with Williams, or ends up playing significant snaps at the strong side where Keith Rivers and Aaron Curry have to prove they can stay on the field it seems Paysinger is in line for an increased role on the defense. Despite his promise that "can handle the workload," we won't know if that's a good thing until we see him in action full time.