New York Giants QB David Carr is the 21st-ranked backup in the NFL, according to NFL.com

Share All sharing options for: NFL.com: David Carr is No. 21-ranked backup quarterback

David Carr of the New York Giants was ranked No. 21 among the NFL's collection of backup signal-callers, according to NFL.com.

Carr was placed in the "game managers" category, which included Drew Stanton of the Arizona Cardinals, Brady Quinn of the Seattle Seahawks, and Bruce Graskowski of the Pittsburgh Steelers.

"An uninspiring mix, but Stanton was poised to start for Arizona before Carson Palmer swooped in," writer Marc Sessler wrote. "Quinn has yet to prove he can guide a team out of dark corners, and Carr, at 33, is entering the swansong of his uneven-at-best career."

Obviously Carr lacks a total wow factor, but he is a safe option. He has been a starter in the league, though his success -- or lack thereof -- overshadows that fact. He is accustomed to Kevin Gilbride's offense, and the sheer fact he has been around the organization and picking the brain of Eli Manning for almost five years now gives the team a certain comfort factor for sure. 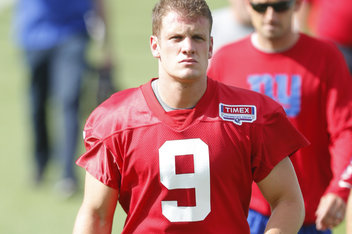 Rookie Ryan Nassib could knock Carr off the roster.

Earning the top two rankings were NFC East rivals -- Kirk Cousins of the Washington Redskins and Kyle Orton of the Dallas Cowboys, whom Sessler labeled as a "pair of aces."

The rest of the top 10 includes Chad Henne, Chase Daniel, Kevin Kolb, Nick Foles, Matt Moore, Matt Hasselbeck, Matt Cassel and Ryan Fitzpatrick, all of whom -- with the exception of Daniel -- have starting experience.

After Fitzpatrick at No. 10, the backup talent severely drops off.