The New York Giants drafted quarterback Ryan Nassib in the fourth round. Today we look at Nassib's potential impact on the 2013 roster.

When Ryan Nassib was still on the board at the beginning of Day 3 of the 2013 NFL Draft the New York Giants decided that even though they didn't need a quarterback that Nassib was too high on their draft board to pass up. So they traded up in the fourth round, surrendering their sixth-round pick in the process, to get him. Director of College Scouting Marc Ross said Nassib "was just too good of a value" to pass up.

Let's focus on the rookie quarterback from Syracuse University as we continue our player-by-player breakdown of the 90-man roster the Giants will bring to training camp.

David Carr's Fate Not In His Hands 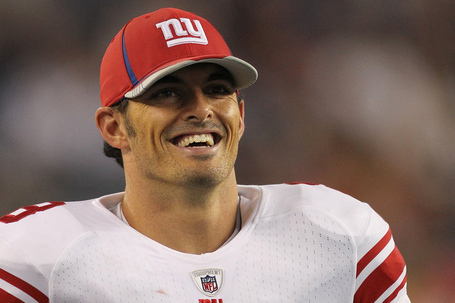 "When I look at quarterbacks, I don’t look at arm strength and all that. That stuff is secondary to me," Ross said. "I look at guys who are leaders and winners and raise the level of their team and when they’re on the field they have a presence about them and some moxie to them.

"This guy just has a presence about him around his team, and then at the Senior Bowl around guys he didn’t know. Those are the winning attributes for me that I look for in quarterbacks"

'This guy just has a presence about him.' - Marc Ross on Ryan Nassib

Nassib will be on the 53-man roster as a backup to Eli Manning. The question is will Nassib be the only backup, or will he be joined by veteran David Carr, the incumbent No. 2 quarterback? The Giants have been loathe in recent years to carry three quarterbacks on the active roster. In fact, they haven't done it since carrying Manning, Jared Lorenzen and Anthony Wright in 2007. In the event of an injury to Manning, however, you have to believe head coach Tom Coughlin would find it difficult to put his season in the hands of a rookie -- even one the Giants traded up to get.

The guess here is that the Giants sacrifice somewhere else on the roster to keep three quarterbacks, likely giving Nassib a season to learn before they move on from Carr and give him the No. 2 job.