The Giants brought in Brandon Myers to replace Martellus Bennett at tight end.

Fresh off a career-best 79-catch season with the Oakland Raiders Brandon Myers landed a free-agent contract with the New York Giants to replace Martellus Bennett, who bolted to the Chicago Bears for more money than the Giants were willing to fork over for a Black Unicorn. As we continue our player-by-player breakdown of the 90-man roster the Giants will bring to training camp let's zero in on Myers. 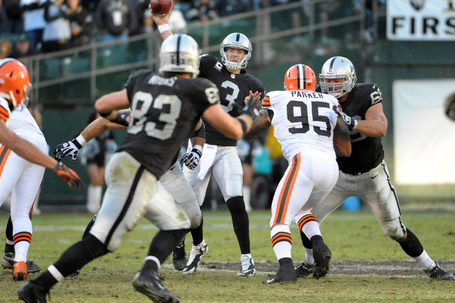 Myers had a breakout season in 2012, catching the aforementioned 79 passes after totaling only 32 catches in his first three seasons with the Raiders. Myers had 806 total yards (8.2 yards per catch) and four touchdowns. Myers' poor run-blocking score from Pro Football Focus (-20.4, worst among NFL tight ends) will be a concern for the Giants.

The way the Giants utilize the tight end it's difficult to envision Myers approaching the 79 catches he had a season ago. It's not hard, however, to see him equaling or surpassing the 55 receptions Bennett had for the Giants in 2012. In his fine Fantasy Football breakdown of Myers, Big Blue View's Dennis Esser points out that Giants tight ends have averaged 52.1 catches, 630.9 yards and 4.7 touchdowns from the 2002 through 2012 seasons. Myers, who seems to be a more precise route runner than Bennett in the small amount of 'All 22' film I looked at, should be able to at least equal those numbers.

Myers averaged 10.2 yards per catch last season compared to 11.4 for Bennett. In 2011 the slow-footed Jake Ballard averaged 15.9 yards per catch on 38 receptions. Giants tight ends coach Mike Pope believes Myers has the ability to get down the field.

"He is a good receiver. I think at the Raiders he was more of an intermediate receiver.," Pope said. "And now our passing game does allow the tight end to get more vertically down the field – flag routes – double seam routes – post routes – that kind of thing. And he appears to have the skills to get those balls. He has a little bit of a jet that can accelerate and go get a ball that is a little deeper. "

The poor blocking in 2012 is undeniably a concern, although there have been some reports that a shoulder injury made blocking more difficult for Myers. He will have to block at least adequately to be a full-time player for the Giants, but he should undoubtedly be an asset for Eli Manning in the passing game.