Coach expects to see Nicks during next week's mandatory mini-camp, but seems less certain about whether or not Cruz will attend.

When the New York Giants gather for their mandatory mini-camp next week at the Timex Performance Center the biggest story is sure to be whether star wide receivers Hakeem Nicks and Victor Cruz are actually in attendance. Giants head coach Tom Coughlin said Thursday he "would expect" to see Nicks, but that Cruz is "a different category." 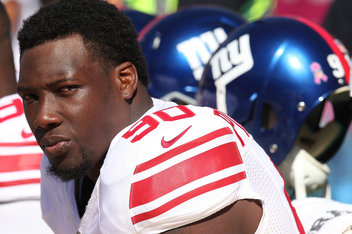 The Giants coach said today a Week 1 return for Pierre-Paul is "aggressive."

Neither player has attended any of the voluntary OTA sessions. Nicks is under contract for one more season and his lack of attendance at the OTAs, as well as his apparent lack of willingness to communicate with the team regarding why he has not attended, have miffed Coughlin. Cruz, of course, has refused to sign an RFA tender while trying to negotiate a long-term contract with the team.

Coughlin was asked if he and Nicks would need to "clear the air" during next week's mandatory mini-camp.

"That might happen, yeah, I would think," Coughlin said.

Cruz caught 86 passes last season and had his second straight 1,000-yard receiving season. Nicks caught 53 passes during an injury-plagued year, but has twice caught more than 70 passes during his four-year career.