Leave it to former New York Giants general manager Ernie Accorsi to come up with the perfect athletic comparison for quarterback Eli Manning. Accorsi, of course, is the man who believed more strongly in Manning than anyone else and engineered the trade that brought Manning to the Giants.

"He’s been a great championship quarterback," said Accorsi, who is now working as a consultant to NFL commissioner Roger Goodell. "He did it with two great drives at the end, which is what you always dream about and he did it against great (Patriots) teams. And against a great coach. I don’t think he’s done. I think there’s a very good chance he will win again."

Ten years with one team is impressive. Injuries, contract problems and performance usually force clubs to move on a lot sooner. But ever since Tom Coughlin benched Kurt Warner and made the switch to Manning in his rookie year, he has started 135 consecutive games (146 including the playoffs), the longest current streak in the league and third-longest in NFL history behind Brett Favre and brother Peyton.

"On top of it all, he’s everything you always want in a New York quarterback," Accorsi said. "He’s humble, he handles the media well, never in a way that’s reactionary and he’s classy. He is as close to Derek Jeter as any athlete has ever been. He’s been ideal. He’s a joy."

Bingo! The parallel to Jeter is spot on.

Neither player will ever be thought of as the greatest to ever play their position.

For Manning, there is always the constant 'is he really elite' question from those who look purely at his statistics. He will likely never match the regular-season statistical accomplishments of his brother, Peyton, or of the New England Patriots Tom Brady. He will never be Johnny Unitas, which Accorsi thought possible when he scouted him. He will never run like Robert Griffin III. He will never look pretty. He will probably always throw too many interceptions, and make some inexplicable decisions. He will always make the 'Manning Face' when things turn out wrong. 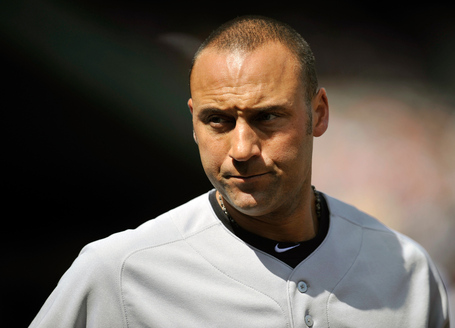 Jeter will never get respect from those who have spent his entire career shredding his defense and saying he is a below-par Major League shortstop. There are still those who say that Alex Rodriguez, not Jeter, is the Yankees best shortstop. Jeter's detractors say he doesn't hit with enough power, having only hit more than 20 home runs three times in 18 seasons. He has never reached 100 RBI in a season. He has never been considered the best player in the game, never won an MVP Award. He will never be the fastest guy, or the guy with the best arm. Some critics have always said he gets more credit -- and attention -- than he deserves because he plays for the Yankees.

Both players, though, are winners with hearts of champions and an assassin's ability to strike with a championship on the line.

Manning, of course, has those two Super Bowl titles -- and MVP trophies. Both of those included last-minute game-winning drives to defeat Brady's favored Patriots. There was the great escape in 2008 leading to the David Tyree helmet catch, then the game-winning pass to Plaxico Burress. In 2012 there was the no one on the planet could have thrown it better pass to Mario Manningham to spearhead that title-winning drive.

For Jeter, there are the five World Series titles, and the four times he hit .346 or better in those World Series. There was the extra-inning World Series home run to beat the New York Mets, the back-hand flip play from nowhere to stop the Oakland Athletics and countless other big plays throughout the Yankees' championship years.

Both players have already represented their organizations, their cities and their sports in exemplary fashion. an ill word is never spoken about either, unless you count some jealousy over Jeter working his way through so many of the ladies on the Maxim Hot 100 list.

New York is lucky to have both players.