The Giants newest version of 'Thunder and Lightning' will feature Andre Brown and David Wilson. Brown and Wilson's fantasy potential are discussed today as well as the factors that will contribute to the Giants success in the running game.

Share All sharing options for: Fantasy Football: Giants to feature newest version of 'Thunder and Lightning'

The New York Giants have a great tradition at the running back position. From Joe Morris to Ahmad Bradshaw the position has been both solid on the field and in the world of fantasy football. Some Giants running backs stood taller among their peers than others. Morris was arguably the best fantasy football running back from 1985 to 1986 as he posted 280.8 points and 264.9 points during those two monster seasons, but measured up at only 5-foot-7. In 1985, Morris finished third in overall fantasy points at running back to brand names Marcus Allen and Roger Craig. In 1986 Morris was the last Giants running back to finish the season as the No. 1 fantasy running back as he scored more fantasy points than the likes of Eric Dickerson, Walter Payton, and Curt Warner.

Bradshaw has been solid, but not spectacular during his tenure as injuries to his ankles and feet and a focus on running back by committee have hindered his overall numbers. This year the Giants backfield is in flux as Bradshaw will now be running the ball for the Indianapolis Colts and the two holdovers are relatively inexperienced. 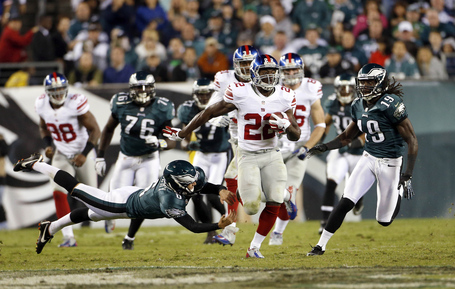 David Wilson, the New York Giants’ first-round pick in 2012, has been given the first chance at being the starter, according to reports. Opportunity governs value as much as ability when it comes to fantasy football. There is no use debating if a player can rush for 1,400 yards and 10 touchdowns if he is only going to get half the carries. With the departure of Bradshaw, Wilson’s stock can be seen as on the rise, while the presence of touchdown vulture Andre Brown must temper expectations. Wilson excites Giants’ fans as well as fantasy football pros with his breakaway speed and athletic prowess, but his reputation for fumbling and limited experience in the passing game are causes for concern. If he lives up to his C.J. Spiller comparisons fantasy football GMs who are lucky enough to own him will be doing back flips right along with him this year. If he is in a true time share without goal-line carries or ends up on the sidelines because of fumbles and poor pass protection than all of our excitement will be for naught. 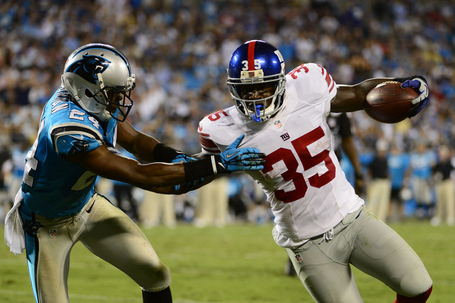 Andre Brown is almost as green as Wilson despite being five years older. After being drafted in the fourth round out of N.C. State, Brown blew out his Achilles tendon during his first summer with the Giants. It has taken Brown a long time to stick on an NFL roster after his initial injury, but it looks like he found a home in New York. The Giants thought enough of him to bring him back into the fold on their Super Bowl run in 2011 and stood by him after he was suspended in the early part of 2012. Brown showed he can be an effective feature back when he was forced to carry the load against the Carolina Panther last season. He ran 20 times for 113 yards and two touchdowns when the Giants needed him the most. While he is not as explosive as he was in college, he is a better running back than when he came into the league. He shows good feet in the hole, while showing excellent vision. He also runs with a patient hard-nosed style that makes for a great compliment to the explosive Wilson.

The Giants have a nice recent history with using the running back by committee approach. Thunder and Lightning was coined when the Giants featured Ron Dayne and Tiki Barber during the 2000 season and continued all the way until 2011 when Bradshaw and Brandon Jacobs took turns battering defenses. While Brown doesn’t roll in to defenses as hard Jacobs used to, Wilson is the fastest to man the Lightning part of the backfield since Barber. Running back by committee with two backs can be a scary thing to a fantasy GM, but it’s better than when the committee is split three ways as the Giants did in 2008 with Derrick Ward, Brandon Jacobs and Ahmad Bradshaw.

The Giants currently have a lot of unknowns behind this year’s version of Thunder and Lightning. Ryan Torain has never been able to make it through an NFL season healthy and Da’Rel Scott and Michael Cox are going to be battling it out on special teams to make the roster. The lack of an experienced proven commodity as a third running back is a concern as a fan of the Giants. As a fantasy GM I look at that as a plus for both Wilson and Brown. I expect the Giants to look for an experienced running back after teams make their cuts, but I don’t expect the Giants plans to change much unless Wilson or Brown don’t perform well in the preseason.

The biggest thing to happen to the Giants’ running backs fantasy potential so far in the preseason was when fullback Henry Hynoski went down to a knee injury. Without going into the numbers and really breaking down statistically how important Hynoski was to the Giants running backs last year, I think we can all agree that the Giants’ backs find a lot more running room when Hynoski is in the lineup. Hynoski is expected back around Week 1, but these recovery timetables are averages and not everyone recovers as quickly. The Giants checking in on the recently released Vonta Leach shows how much they believe that a dominant fullback is a key to their running game.

While Leach will surely sign with a team that has more cap room, the Giants will focus on getting Hynoski ready for the season and hope that Bear Pascoe can do his best Hynoski impression. The Giants offensive line was bolstered by this year’s first-round pick Justin Pugh and the re-signing of Will Beatty and Kevin Boothe in the offseason. The age and overall effectiveness is a little bit of a concern when discussing long-time Giants David Diehl and Chris Snee, but their knowledge and seasoning should be assets. David Baas has been an average center, but is not the dynamic run-blocker and athlete the best running teams seem to have manning the position. Baas and Snee’s injuries also made finding a versatile young lineman a priority in this year’s draft. With the addition of Pugh and the stability that Beatty and Boothe provide, I expect the Giants to be better up front this year.

Factoring in a healthy Hakeem Nicks, a motivated Victor Cruz, and an emerging Rueben Randle in the passing game, the Giants should be facing less defenses featuring eight men in the box. The lack of having that safety in the box should mean more easy yards for whoever is toting the rock for the Giants. With Mike Pope coaching up Brandon Myers and Adrien Robinson the Giants' tight ends should be able to help in the running game.

The outlook for the running game is dependent on so many factors that banking on previous success is not the easiest thing to do. With coaching changes, free agency and injuries fantasy fortunes can change from minute to minute. Luckily the Giants reliance on a balanced offense and Kevin Gilbride’s continued presence bode well for any Giants’ running back’s fantasy potential. I expect big things from David Wilson in the future, but not necessarily this year. I think Brown will be a forced handcuff for most GMs who draft Wilson, but I don’t expect him to take over the featured back role. When teams feature a running back by committee the better running back doesn’t necessarily become the better fantasy back and this could be the case for the Giants this year. I have Wilson ranked as my 18th overall Fantasy running back in non-keeper, non PPR, and conventional scoring leagues as of right now while I have Brown down in the late 30s.

Wilson will be drafted anywhere from the low end of the third round to the fifth round in most 12-team conventional scoring leagues. Brown will be drafted as a handcuff after the 10th round based on all the information currently available. Brown may end up outscoring Wilson this year, but Wilson has way too much potential to not be looked at as RB2 material with upside. I personally don’t believe that you must draft a running back’s handcuff as it is a negative way to look at the fantasy draft. I only draft a handcuff if the value of the player’s potential is greater than the available players at the spot I am drafting him. If I don’t draft two running backs early and need to fill my RB2 spot in the fifth round I will be more than happy to come away with Wilson.

Feel free to message me on Twitter @coachesser or on Facebook at CoachEsser's Playbook. You can also read any of my fantasy articles at www.coachesser.com