New York Giants' James Brewer knows he has an opportunity

James Brewer, in his third season, is competing with David Diehl and Justin Pugh for the starting right tackle job.

Share All sharing options for: New York Giants' James Brewer knows he has an opportunity

Up until now the most notable moment for James Brewer in his New York Giants' career has been stepping off the plan in Indianapolis for Super Bowl XLVI two seasons ago carrying the offensive line's lucky stuffed bear.

To get the bear story out of the way, the Giants brought it to the Super Bowl when they defeated the New England Patriots in 2007. So, in 2011, the bear had to make the trip to Indianapolis.

"I was the one rookie (on the offensive line) we had that year so I was given the task of carrying it off the plane," Brewer said.

Rather than pass the bear along to the newest crop of players, someone like first-round pick Justin Pugh or seventh-round pick Eric Herman, Brewer has kept the bear. "Now he just sits in my locker," Brewer said. "I’m not passing him on to anybody until I leave."

'There’s definitely a spot to be won.' - James Brewer

The Giants hope that in 2013 the 25-year-old Brewer, drafted in the 2011 fourth round, makes his mark on the field rather than just by ensuring the safety of the bear. "it is time for him (Brewer) to get in there and play," general manager Jerry Reese said of Brewer prior to the 2013 NFL Draft.

During OTAs the 6-foot-6, 323-pound Brewer worked some at right guard in place of Chris Snee, who is still rehabbing from offseason hip surgery, and some at right tackle. It is at right tackle, where veteran David Diehl and rookie first-round pick Justin Pugh are also working, that Brewer has a real opportunity.

"I think there’s competition there. There’s definitely a spot to be won," Brewer said. "Dave’s been here for a while, he knows his stuff obviously -- he’s been playing for a long time here. And then you’ve got a rookie that was just drafted. He’s young and still trying to learn the offense. I’m kind of like the happy medium." 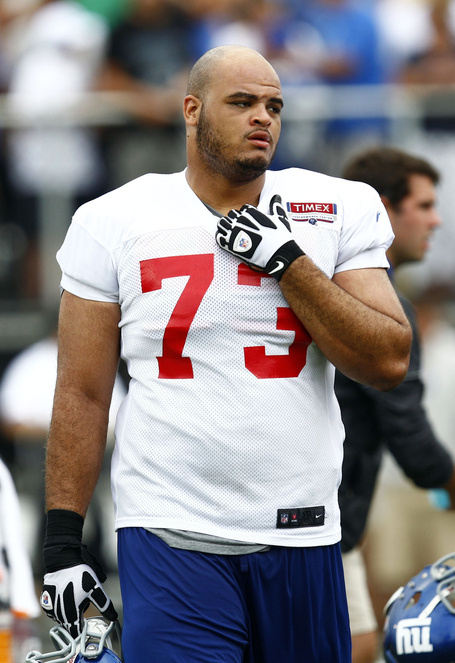 "James has an opportunity here in the OTAs to get a lot of reps. He’s getting the most reps of anybody because we have him at right guard and then swing him back to right tackle because David Diehl is limited with the amount of reps he can do right now," Flaherty said. "That’s helping him and he has some good days and he has some bad days. So right now we have to get more good days than bad days."

Brewer did not play at all as a rookie and saw only 34 snaps on offense a season ago. He feels that experience helped him, however, and said "I feel very confident whether it’s right guard or right tackle."

Brewer said that guard requires a player to be more of a "road grader" going up against bigger, stronger defensive tackles, while the tackle position requires being able to handle "a fast, lighter defensive end."

Truth is, for Brewer there really isn't a big margin for error at this point. If he is going to beat out Diehl and Pugh and "get in there and play" he is going to have to earn it.