New York Giants' mandatory mini-camp preview: What to watch for

The New York Giants hold their mandatory mini-camp Tuesday-Thursday. Here is a look at some of the things we might learn.

Share All sharing options for: New York Giants' mandatory mini-camp preview: What to watch for

The New York Giants begin their mandatory mini-camp Tuesday at the Timex Performance Center. Here are five things I will be watching over the next three days -- and these have nothing to do with whether or not Hakeem Nicks and Victor Cruz show up.

There is soooo much discussion of linebackers here at Big Blue View it will be nice to see them with my own eyes over the next few days. I will be especially interested in a few things. Is Mark Herzlich really ahead in the middle linebacker competition? How well are Jacquain Williams and Aaron Curry moving around? Does Kyle Bosworth look like he can do more than contribute on special teams? 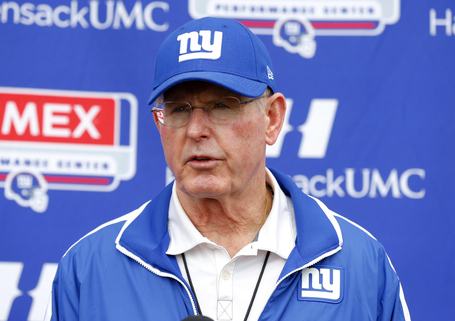 Here are the CBA guidelines NFL teams follow during mini-camp.

Can Corey Webster cover anybody? Does Jayron Hosley look like he has made progress from last season? Can Terrell Thomas get on the field? Do Trumaine McBride and Charles James look capable of competing for roster spots? These are a few of the things I will be hoping to gain clues about.

I will be curious to see not only who looks like they might be playing well between David Diehl, James Brewer and Pugh, but how the snaps are distributed. It will, of course, be tough to get a real read in shorts and no pads, but I'm sure we can learn a little bit.

With Jason Pierre-Paul out and Justin Tuck searching for his missing Pro Bowl form, the spotlight has been on the plethora of young defensive ends on the current roster. Adrian Tracy and Moore have gotten most of the attention thus far. Adewale Ojomo, Justin Trattou and Matt Broha will be aiming to change that.

What have I left out? Are there any specific players you would like me to focus on while watching practice the next three days? Remember, it will still be difficult to get a read on certain aspects of how a player might perform under live conditions as players will be in shorts and t-shirts with no pads, no tackling, no bump-and-run coverage and no live pass rush permitted.

There will be live practice reports, which you can follow on Twitter @bigblueview and, hopefully, here on the website. There will also be a practice open thread for your enjoyment.

Practices are closed to the public.