Former New York Giants coach Bill Parcells is ranked No. 11 on ESPN's list of the greatest coaches in NFL history.

Parcells coached 19 seasons in the NFL, including seven seasons with Big Blue, winning Super Bowl titles in 1986 and 1990. 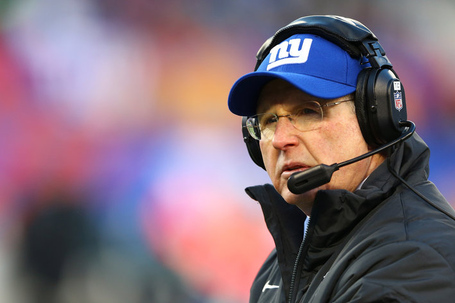 The current Giants coach ranked three spots below Parcells on the ESPN list.

The Lombardi Trophies speak for themselves, but it's only a decimal on Parcells' impressive coaching resume and track record.

Teams coached by Parcells -- or as you may refer to him as "The Big Tuna" -- finished .500 or better 14 times. His teams made the post-season 10 times, winning five division titles. Parcells' 172-130-1 record is good for 10th all-time among career victories.

Parcells' lasting reputation was his propensity to turn around teams. Four times Parcells took over teams that had won five or fewer games, and on all four occasions Parcells lifted them to a playoff-caliber club by his second season. This includes the New York Giants, New York Jets, New England Patriots and the Dallas Cowboys, in addition to the Miami Dolphins, who after a 1-15 season finished atop the AFC East with Parcells as Executive Vice President of Football Operations.

In an interview with ESPN.com, former New York Giants great pass-rusher Lawrence Taylor explained why Parcells thrived as a head coach in the NFL.

"As good a player as I was, there were times when I wasn't into it. The way he got you hyped up was amazing. When he said something, I believed what he said. I would have a bad game the week before and people were asking, "What's the matter with Taylor?" Reporters were asking, 'What's the matter with Taylor?' So all week long he'd call me 'What's-the-matter-with?' He had them put that on the back of my practice jersey.

"He was such a master of B.S. You'd get so fired up, you'd go out and destroy people. I was All-Pro for 10 years, but when Bill left, I mentally left. I was retired three years before I actually retired. I only came outside once a week to practice. It was like losing a mentor, a friend."

Not only did Parcells help lift numerous teams to championship and post-season lore, but he helped groom some of the league's premier coaches. The Parcells coaching tree includes Bill Belichick of the New England Patriots, Sean Payton of the New Orleans Saints and Tom Coughlin, the New York Giants' current head honcho, who was named No. 14 on this same list.