Dennis Esser, known as 'Coach Esser' to Fantasy Football junkies on the Internet, joins Big Blue View beginning today. His role? To coach you up and help you be the best Fantasy Football player you can be. As an introduction, Dennis shares the story of how he became a fan of the New York Giants.

Share All sharing options for: A chance meeting makes a New York Giants fan for life

We all have a story as to how we were lucky enough to become New York Giant fans. Let me preface this story by telling you that I truly believe we are lucky to be Giants' fans in the way that Joe DiMaggio thanked the Lord that he was a New York Yankee. Some people are born into being a New York Giants' fan. Children are literally welcomed into the world by being placed into a Giants' blanket and their blood begins to run with the Giants' blue. Others have season tickets passed down generation to generation since the days at Yankee Stadium. While others around my age were a product of the dominant run the Giants had under head coach Bill Parcells in the mid to late 1980s to early 1990s. I was none of the above.

My family had no allegiance one way or the other. Richard Todd posters hung next to cut out Sports Illustrated pictures of Dan Fouts on my teenage brother's wall. Joe Klecko was as celebrated as George Martin in my house. We were football fans first and foremost without a true rooting interest. My father never told us which team to support. He let us decide for ourselves. My father's theory on sports teams and their importance mirrored Chazz Palmenteri's from 'A Bronx Tale.'

My Giants fan journey began as any other summer day does for a 5-year-old during the 1980s. I was playing by myself in the backyard when a very large man jumped over the fence to ask for directions. I know what you're thinking. This story sounds like an after-school special and not the typical "How I became a Giant Fan" story, but remember this was the summer of 1983 -- well before " I Know My First Name is Steven" made every parent in America a nervous wreck. The man needed directions to the local high school and I needed a playmate. A bargain was struck and four short years later I was watching Phil Simms set Super Bowl records with a joy that chokes me up to this day.

My brothers headed home in between double session football practices to try and eat some lunch and rest their weary legs before heading back to school for another round of sprints in 90-degree weather. They weren't concerned when they weren't met at the door by their precocious little brother. They were focused on re-hydrating and trying to see if my mom had baked any cupcakes.

My brother Tom walked out on the back deck to hang his practice clothes to dry when he heard a mans voice say, "Okay this is the last one." I called back,"Okay" and wham a wiffle ball was slammed from one side of the yard to the other. My brother peeked over the deck and saw Bruce Kimball of the New York Giants chasing a wiffle ball across the yard as I was pretending to round the bases with my over-sized plastic bat. 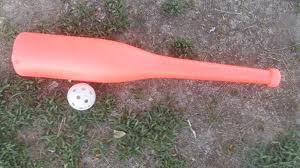 Dumbfounded my brother asked me what I was doing, and I said I was playing with my new friend.

Mr. Kimball was just passing through my yard trying to get to the high school to rehabilitate his injured leg when he made a Giant fan for life. His Giants career consisted of exactly one game before a broken leg derailed his career. His chance meeting with me has given me 30 years of being a very lucky Giant fan. I thank him during every draft, every opening day, and especially after all four Super Bowl victories I have witnessed. 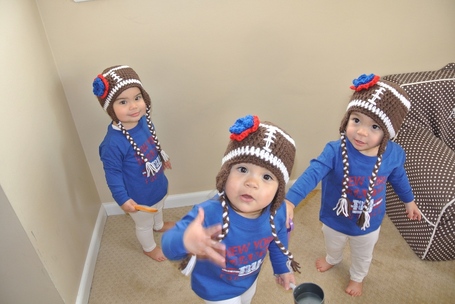 I have chosen to raise my girls the right way and that's to be a Giant fan from Day 1. Luckily I am spending their formative years with them, and they will know Lawrence Taylor's career sack totals (132.5, btw) before they know the Pledge of Allegiance.

Just to let you know a little about me and why I am sharing my Giant fan introduction story. I am a former high school football coach who is now a stay at home father of triplet girls. When I am not setting world speed records for diaper changes and having imaginary tea parties you will find me writing about all aspects of fantasy sports. My passion has led me to become the newest contributor here at Big Blue View, where I will be writing a weekly column forecasting the Giants' players fantasy potential as well as breaking down each week's in game fantasy match-ups. I can't wait to share my fantasy football tips and theories with all of my Giant fan friends every Friday here at Big Blue View.