A closer look at offensive guard Eric Herman, drafted by the Giants in the seventh round of the 2013 NFL Draft, including perspective from Ohio offensive line coach Kevin Lightner.

Bruiser. Mauler. Nasty. Masher. Tough. Powerful. These are some of the words evaluators use to describe Eric Herman, the Ohio University guard the Giants selected in the seventh round of the 2013 NFL Draft, 225th overall.

"He's as tough a guy as you'll find," said Ohio offensive line coach Kevin Lightner. "I think the Giants are getting a tough, smart, physical football player who will work hard and do the right thing. Great locker room type guy. He's a guy that everybody is going to love."

Herman was credited with an incredible 335.5 pancake blocks during his four seasons starting at Ohio. His 36 bench press reps of 225 pounds were the most by anyone at the combine this year. Lightner said simply that the 6-foot-4, 325-pound Herman is a "powerful guy" who works hard in the weight room but is blessed with "natural strength."

"There will be nobody stronger out there. Put that together with that toughness. He's 325 pounds. He's lean. He's a physical, physical kid," Lightner said. "He's a pure brawler and masher inside." 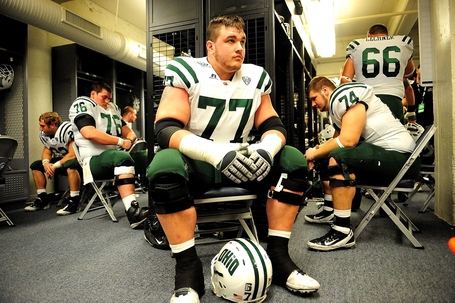 Giants Director of College Scouting Marc Ross said Herman "is just a tough, nasty brawler as a guard. I mean this guy is just physical. He likes contact. He plays hard. Not the most gifted athlete, but he’s just a tough guy and he’s big. A big, smart, tough guy and we think he’ll bring a physical presence to the line."

Giants starting left guard Kevin Boothe is a veteran player on a one-year contract. Right guard Chris Snee is on the back side of a terrific career. Herman joins a group of recently drafted candidates behind them that could include 2013 first-round pick Justin Pugh, James Brewer and Brandon Mosley, as well as holdovers like Jim Cordle and Selvish Capers.

"(Herman is) a big, tough, nasty guard," Giants GM Jerry Reese said. "We really liked him. We'd been looking at him on the board for a while there and we were hoping that if he could get to the seventh row, he'd be a nice pick for us at that spot. He'll create some competition at the guard position -- tough, hard-nosed, big football player."

Herman also has something else the Giants seem to gravitate towards -- intelligence. He graduated Ohio with a degree in engineering.

Lightner, who played for the Tampa Bay Buccaneers in 1988 and spent time in both the CFL and World League of American Football, offered Herman perhaps the highest possible praise.

"He's a guy that I would have loved to play next to. I just don't think there's a lot of guys like him out there just as far as the strength and toughness," Lightner said.

"There was a play against Marshall where he pulled and pancaked three guys on the same play. He's a great second-level guy, runs through contact.

"He'll be a mauler in the run game. If anything he tries to finish too much. He'll try to get someone down on the ground no matter what, all costs. He'll have to back off that just a little bit."

Lightner envisions Herman as an eventual starter at the NFL level.

"I think they [the Giants] will love him. He's an O-line coach's dream," Lightner said. "I think he's an NFL player."

Much of this is against Penn State. Herman is No. 77.