Cooper Taylor's size and skill set could eventually offer the Giants some intriguing possibilities in terms of how to deploy their secondary. Taylor could be a new type of hybrid safety/linebacker.

The most intriguing prospect in the New York Giants' 2013 NFL Draft class might just be Cooper Taylor, the Richmond safety selected in the fifth round (152nd overall). Cooper is a humongous safety at 6-foot-43/4, 228 pounds. He also probably has the best back story of any of the players selected by the Giants.

"We think we got a hidden gem there," said Giants Director of College Scouting Marc Ross. "This guy is big, fast, smart, plays the game the right way. He does a lot of things for Richmond. They line him up at multiple positions. You’ll see him in the box; you’ll see him back deep. He covers the slot. Productive there. He transferred from Georgia Tech, but we think this guy has got a lot of upside. Sent our (secondary-safeties) coach (David) Merritt down there to work him out -- a private workout -- and he was really impressed by him. We had him in for a visit. The kid is really smart. Loves football, so we think he has a ton of upside."

Taylor began his collegiate career at Georgia Tech before being diagnosed with a heart condition that required surgery. From Giants.com:

While starting at free safety for the Georgia Tech Yellow Jackets in 2009, he was having a banner campaign through three games, but was then diagnosed with Wolff-Parkinson-White Syndrome, which is characterized by abnormal electrical pathways in the heart. The illness was discovered when trainers saw that he had an extremely high heartbeat in the game vs. Miami on September 17th.

Taylor underwent a corrective procedure to correct the condition that can cause the electrical charges between the heart's chambers to become out of sync. The former Tech safety’s surgery was performed in November to restore normal rhythms in his heart, according to medicinenet.com

The surgery somehow seemed to make it easier for Taylor, 185 pounds in 2008, to gain weight.

When he returned from the 2009 surgery in 2010 he found himself buried on the Georgia Tech depth chart. He transferred to Richmond in 2011 and had to sit out another season due to NCAA rules. He wound up being an FCS All-American in 2012 despite breaking both hands during the season.

"I’ve always thought that if I played well enough, that I would get a shot to play at the next level, If you’re a good enough player, no matter where you are, some team will find you," Taylor told the Richmond Times Dispatch a few days prior to the draft.

The Times Dispatch also noted that the Giants have a Richmond connection in defensive coordinator Bob Trott, who was a defensive assistant with the Giants in 1991 and 1992.

Here is part of what Trott told the Times Dispatch about Taylor:

"Quite frankly, some NFL teams like big safeties, and some of them don’t," Trott said. "I would love to coach him in the NFL. My experiences, with the safeties I’ve had, I’ll take him any day. ... He has got the intangibles. He’ll do really, really well on (an NFL) team." 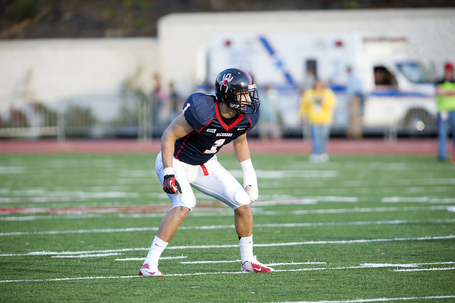 Taylor is primarily a safety, but does have experience dropping down to play outside linebacker. With the Giants' fondness for using a three-safety set, something defensive coordinator Perry Fewell began a few seasons ago with Deon Grant, Taylor could be a perfect fit for the Giants' defense.

"As soon as it becomes second and long, everybody changes anyway. You’re gonna see either a 4-2-5 or a 4-1-6 package, depending on the quality of your people that you can bring down. He is certainly a candidate for one of those spots. Although with his range, you think you’d want to be attracted to him staying in the middle of the field but we’ll see," head coach Tom Coughlin said Monday on WFAN.

Taylor joins a group of safeties that is led by starters Antrel Rolle and Stevie Brown. He will compete for a backup spot with Will Hill, Ryan Mundy and Tyler Sash.

"He is a safety by trade but you drop him down in that three-safety package or whatever you want to do in terms of -- you substitute a defense whether he plays an outside backer or whatever. That is all going to have to be determined when we get him in here. We are hoping that he is going to come in and apply all of the tools that he has right away there in the secondary for us."

At Richmond's pro day, Taylor ran 4.49 40-yard dash, had a 36 1/2-inch vertical jump, 10-foot-7 broad jump, posted a 4.29 in the short-shuttle, 6.96 in the three-cone and hammered out 23 reps of 225 pounds on the bench press. Tony Pauline of TFY Draft Draft Insider called Taylor "a prototypical strong safety candidate."

General manager Jerry Reese called Taylor a "big size-speed safety that we think has a really nice upside. I can envision him honestly on special teams with that size and speed. I can envision him being that third safety in some the three-safety looks that (defensive coordinator) Perry Fewell likes to use sometimes. A big, tough guy, we like his skill set."

Now we wait to see if that skill set translates to the NFL and helps the Giants.

Coughlin talks about the draft

What will Giants do at linebacker?