The Giants have replaced Chase Blackburn at middle linebacker with Dan Connor. Could they still target a potential long-term answer at the position in the 2013 NFL Draft?

Today we continue our position-by-position look at the New York Giants' pre-draft 2013 depth chart by turning our attention to the middle linebacker position.

The Giants let the popular Chase Blackburn, a hero of the 2011 Super Bowl victory over New England but a limited athlete better suited to a reserve role, leave via free agency. He ended up signing with the Carolina Panthers. In his stead they signed Dan Connor, a five-year veteran who has historically been a better run defender than Blackburn. Connor, who spent four seasons with the Panthers and one with the Dallas Cowboys, signed a one-year deal. 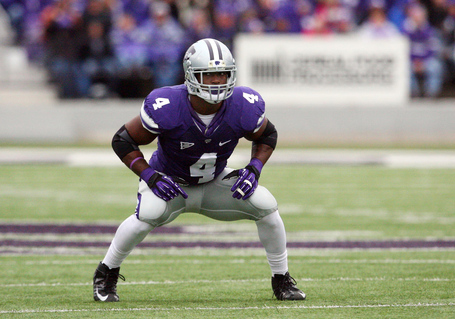 It would seem highly unlikely that the presence of Connor, or Mark Herzlich for that matter, would preclude the Giants from drafting an impact middle linebacker if they find the right value in the early rounds of the draft. Perhaps they might even find a project type middle linebacker on the third day of the draft and see if he can develop into a long-term answer at the position.

We have endlessly debated the guys who are possibilities in the first couple of rounds. Here, let's discuss them again.

Arthur Brown, Kansas State -- Dan Kadar of SB Nation's Mocking The Draft continues to beat the drum for Brown, who he believes if the best inside linebacker in the 2013 draft class. "On a cover-2 team, Brown could be a star because he's such a good athlete. Other teams will look at him as a weak-side linebacker," Kadar writes.

In the Big Blue View prospect profile on the 6-foot, 241-pound Brown, Jesse Bartolis writes "Brown is a very good football player, and a good athlete, but he is not a size/speed phenomenon and that is usually where the Giants like to go in the draft."

Some analysts think Brown could be the first middle linebacker selected. Others think he could last until the middle of the second round.

Alec Ogletree, Georgia -- If you have been following our draft coverage you know by now that Ogletree is Jesse's man-crush in this draft class. In his profile of Ogletree, Jesse writes "I really, really do think Alec Ogletree has the potential to be a very special player. It would not surprise me at all if Ogletree ended up being the best player in this draft three years from now."

Kadar says Ogletree is "not as refined of a prospect as Brown, but he has similar coverage skills."

There have been character concerns with Ogletree that need to answered by any team considering him. As with Brown he could wind up in the middle or on the weak side. Also like Brown some analysts see Ogletree as a top 15 pick while others see him lasting into the second round.

... there is much to like about Te'o. He's NFL ready as a prospect because of his instincts and tackling ability. But he's limited as a prospect. His ceiling isn't as high as some players because he doesn't have top-end athleticism.

In his profile of Te'o, Jesse Bartolis wrote:

The Giants really need a long-term solution at middle linebacker, and on the field Te'o might be the best in the class (I like Alec Ogletree more), but if his character checks out he does fit with the Giants, who might not even have to use a first-round pick on him anymore.

If the Giants don't grab a middle linebacker in the first round and Te'o is somehow still on the board at No. 49 in the second round it might be difficult to argue if the Giants were to grab him.

Kevin Minter, LSU -- Minter, as mentioned above, is a true middle linebacker like Te'o. Some analysts prefer him to Te'o, others don't.

In his prospect profile of Minter, Jesse said he is "a terrific football player, but not a terrific athlete." In relation to the Giants, Jesse also wrote that selecting Minter "would go against the profile of their typical defensive player."

Like Te'o, however, you have to think that if Minter slides to No. 49 he could be a player the Giants would select. He certainly would be excellent value at that point.

Among other players to consider later in the draft might be Kiko Alonso (Oregon), Jon Bostic (Florida), Kevin Reddick (North Carolina) and Steve Beauharnais (Rutgers).