New York Giants David Wilson and Chris Snee talked about the upcoming season while making a charity appearance on Thursday.

"I try to make myself available to as many of these [events] as possible, especially for causes like this to fight hunger," said Snee. "I think Boost Mobile's doing a great thing. I'm just happy to be a part of it." 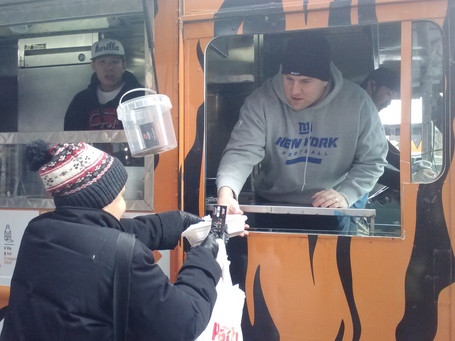 For every resident that participated in today's event Boost Mobile will donate a meal for a New York City child to City Harvest's Skip Lunch Fight Hunger program. The program helps feed hungry children and their families during the summer. In addition Boost Mobile donated $10,000 to City Harvest. If a participant was lucky enough to be a certain number in line they received a prize which included a football signed by Snee and Wilson.

"For us to come here and help, I think it's our duty," said Wilson. "Just to help out the community, I think it means a lot to them to see us out here."

Outside of handing out food for a cause, Snee and Wilson both talked a little football.

'I feel great. I haven't had this motion in my hip in a long time.' - Chris Snee

Snee has had a history of hip injuries and recently had hip surgery to fix a torn labrum and remove bone spurs, but the 31-year-old says he feels great.

"I think the big thing [this off-season] is rest. For a guy my age to be as around as long as I have, I think the main thing is rest from the pounding that your body takes from the year before," Snee said. "I had hip surgery a month ago and I feel great. I haven't had this motion in my hip in a long time. I'm anxious to get back out there and feel good for once."

The Giants came off a 2012 season of disappointment when they missed the playoffs. Snee knows that the urge to make the playoffs in 2013 is not only a push from missing them in 2012, but also because the Super Bowl is on their home turf next year.

"Every team in the NFL is doing that now. They're breaking down the film from last year and making all the corrections necessary, so we have a lengthy list of the team that won the Super Bowl cause we know everyone is trying to get there," Snee said. "Obviously with a Super Bowl in our home stadium, we're really driven to be there."

With Ahmad Bradshaw gone, Wilson is likely going to be the guy coaches turn to as the starting running back for the Giants. Wilson is ready to prove to his coaches that he is more than ready for a bigger role.

'I always approach the job as if I'm going to be the starter.' - David Wilson

"I'm always working hard. I always approach the job as if I'm going to be the starter. I think that's the way everybody should prepare, that way when stuff like this happens then you're ready. This off-season I'm going to keep working hard and still try to prove myself and convince the coaches that I'm the guy."

"I'm more confident going into this year from my experience last year. I know what to expect this time," said Wilson.