Brandon Myers is the Giants' new tight end, replacing Martellus Bennett. What can the Giants, and their fans, expect from Myers? We take a brief look.

Share All sharing options for: Brandon Myers analysis: A look at the Giants' new tight end

There has been a great deal of chatter amongst Giants' fans regarding Myers since the Giants signed him to replace Martellus Bennett, who moved on to the Chicago Bears after catching 55 passes from Eli Manning last season. Let's take a closer look at Myers, and how the Giants might be able to utilize him. This, incidentally, is not an exhaustive study. More like an overview of what I see and what I think might happen after watching a few of Myers' games.

He is, undoubtedly, "quarterback-friendly." He is a big target at 6-foot-4, 250 pounds and does not drop the football. He dropped just six passes last season in 85 targets, a drop rate of 7.06 percent bested by only seven other NFL tight ends.

Myers is a guy who can work the middle of the field with short, underneath routes.

He is also "quarterback-friendly" because he is a chain-mover. Myers is a guy who can work the middle of the field with short, underneath routes. He appears to be a precise route-runner with the ability to separate from safeties and linebackers in short areas, or find holes in zone coverage.

In the Giants' offense, where Eli Manning often has only one target on third down -- Victor Cruz -- Myers provides another option. He is a chain-mover. I watched several 2012 Raiders' games using the 'All-22' film from NFL.com, and Myers is a first-down machine. He is also a red-zone target.

What he is not

First and foremost, he is not Aaron Hernandez of the New England Patriots. He can work from the slot, and did so occasionally in Oakland's two-minute packages, but he most often lined up inline despite being an atrocious run-blocker.

Myers is not a vertical down-the-seam threat.

Myers is not a vertical down-the-seam threat. He is a guy seems to excel in those short 7-12-yard routes over the middle. He was 10th in the league in Yards Per Route Run among tight ends in 2012, but that's more because of efficiency than any downfield ability. The longest catch of his career is only 29 yards and, if my math is right he caught only seven passes of longer than 20 yards during the 2012 season.

The series of images below, with Myers circled on one route during his 14-catch game against the Cleveland Browns, is typical what you get from him. 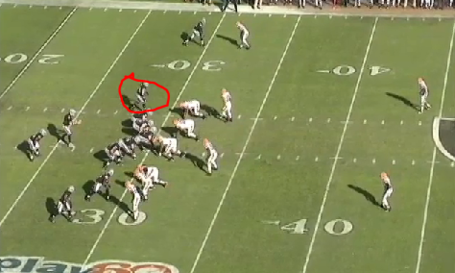 Myers is lined up off the line of scrimmage after coming in motion. 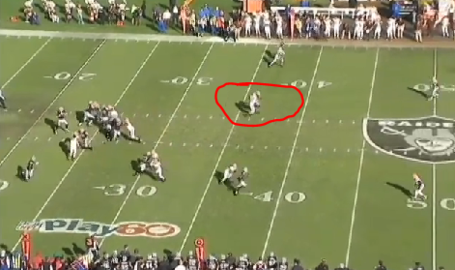 He is covered one-on-one here by what appears to be a linebacker. 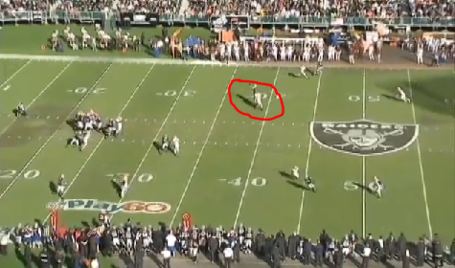 Myers runs a short out and makes a 7-yard reception.

How will the Giants use him?

This is the great question, since his lack of blocking acumen makes him different than the tight ends the Giants have employed in the Tom Coughlin era.

Perhaps they will split him off the line more than the Raiders did, using Bear Pascoe or Adrien Robinson more as their traditional inline tight end. Just a guess, but you will probably see him in traditional alignments more than you might think. That is just the Giants' way.

Manning could indeed find Myers to be "quarterback-friendly."

The Giants have had some difficulty in the red zone in recent years, and Myers could help there as well with some drive-saving first-down grabs.

I somehow doubt Myers will equal the 79 catches he had in Oakland. Coughlin and Kevin Gilbride have never used the tight end as a primary pass-catching option. As a third-down and red-zone weapon, though, it appears to me that Manning could indeed find Myers to be "quarterback-friendly."