Who would become coach of the New York Giants if Tom Coughlin did decide to retire after the 2013 season? Here is a list of potential candidates.

Let's suppose for a minute that Terrell Thomas is right, that after this season Tom Coughlin calls it a career. What happens next? Who coaches the New York Giants after that?

Here are a few candidates. I compiled this list, incidentally, keeping in mind the franchise's long-established tendency to try and stay in-house, or at least stay with people it has some type of past relationship with.

Perry Fewell -- I can hear you screaming "nooooooooooooooooooooooooo" already. Reality is, however, that Fewell would likely be at the top of the list if Coughlin were to ride off into the sunset after 2013. That would be especially true if 2013 is a good year for the Giants, and maybe a fait accompli if they happen to win a Super Bowl title. The franchise knows Fewell, he would almost certainly have Coughlin's support and Fewell could easily be back on the "hot candidate" list after 2013.

Mike Sullivan -- Sullivan has gone from Giants' quarterback's coach under Coughlin to offensive coordinator of the Tampa Bay Buccaneers. He received interest from the Chicago Bears for their head-coaching position after Lovie Smith was fired. It seems logical the Giants would consider him. 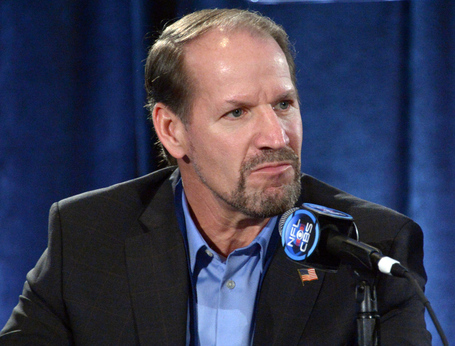 Bill Cowher -- There has been speculation for years that Cowher, the former Pittsburgh Steelers coach, has been holding out for the Giants' job once Coughlin no longer has it. If Coughlin leaves, we find out if that's true.

Lovie Smith -- Fired by the Bears after 2012, Smith is a good coach and a class act who seems like a guy who would fit the Giants. He went 81-63 in nine seasons in Chicago with a Super Bowl appearance and a loss in an NFC Championship Game. There is no doubt in my mind he gets a head-coaching job somewhere next season.

Mike Nolan -- The former San Francisco 49ers head coach and current defensive coordinator of the Atlanta Falcons was DC for the Giants from 1993-96. That might at least earn him consideration.

Brian Kelly -- Hey, one college-coaching Kelly (Chip) finally jumped ship to the NFL, taking the Philadelphia Eagles gig. It seems like only a matter of time before the Notre Dame coach does the same thing. This does not seem like the Giants' style, but his name might at least come up in the discussion.

Now for a couple of under-the-radar college guys who have connections that might at least earn them a phone call from the Giants. If Greg Schiano and Doug Marrone, moderately successful college coaches, can draw NFL interest these guys probably can, too.

Mark MacIntyre -- This is your way out of left field candidate. MacIntyre is the current head coach at San Jose State and coached under Bill Parcells with the Dallas Cowboys. San Jose State went 1-12 in MacIntyre's first season, but the Spartans went 11-2 and won the Military Bowl in 2012.

Kevin Gilbride, Steve Spagnuolo, Charlie Weis -- I just don't see Gilbride, the Giants' offensive coordinator, as a guy who would get a serious look. I will defend his work, but his age will work against him. Spagnuolo and Weis, currently at Kansas, have obvious Giants' ties and both might have been front-running candidates two or three seasons ago. Each, though, has seen his star diminish in recent years.