One of my strong beliefs is that in today's pass-first NFL defenses can never have enough quality cornerbacks. The New York Giants definitely did not have enough of them in 2012, when only Prince Amukamara distinguished himself.

Captain Munnerlyn is a 5-foot-8, 182-pound four-year veteran from the Carolina Panthers who is an unrestricted free agent. Munnerlyn has done a good job in the slot for Carolina the past three seasons, and has started 25 games the past two years. He also has some punt return experience.

Could he be a guy the Giants might target in free agency in an effort to improve their secondary?

Jaxon from SB Nation's Panthers' web site, Cat Scratch Reader, had this to say about Munnerlyn:

Munnerlyn is too short to play the outside (5-foot-8) but has been an effective nickel guy playing man coverage on the slot guy. He's very strong, heck of an athlete with great leaping ability. He tends to get called for PI from being too aggressive, arriving early. He has some return skills though as well. We are hoping he stays but given the Panthers salary cap they might look for a cheaper alternative. 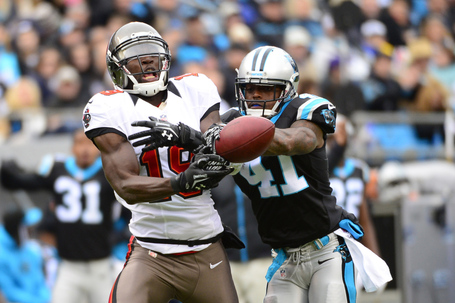 Munnerlyn had a +0.3 score from Pro Football Focus, which is entirely average. His passer rating against was 76.6 compare that to 106.6 for Corey Webster and 121.5 for rookie Jayron Hosley.

Hosley seems to have the right skillset to play in the slot for the Giants, and that is really what they drafted him for. He struggled to acclimate to the position as a rookie, however. If the Giants are of a mind to move to move Hosley to the outside, perhaps a player like Munnerlyn could fill the slot role.

At the very least, he would be an improvement over any of the depth the Giants currently have at corner.