The Giants had one of the toughest schedules in the NFL in 2012. Their schedule for 2013, on paper, is not quite as difficult.

Share All sharing options for: 2013 New York Giants' schedule: Not as daunting as 2012

After winning Super Bowl XLVI, the New York Giants were rewarded one of the toughest schedules in the NFL. This year, though, they didn't make the playoffs and they were rewarded with an easier schedule in 2013.

According to NFL.com, as of now the Carolina Panthers have the toughest path to the playoffs in 2013. They are playing teams with a combined 138-116-2 records in 2012. 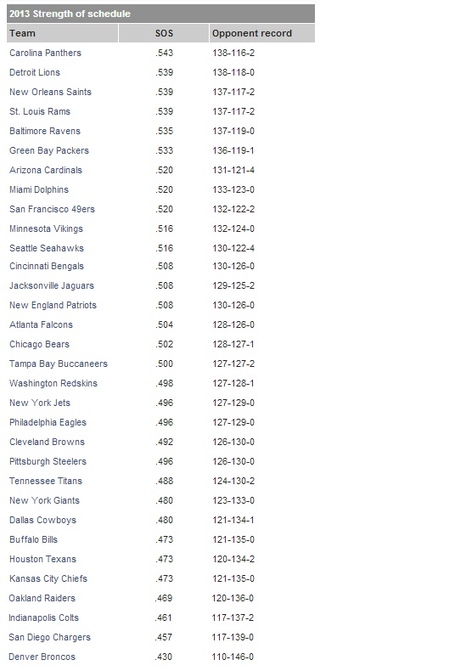 The Giants have it much easier than Carolina and are facing teams with a combined 123-133-0 record in 2012. Aside from the NFC East opponents, they will be facing the Green Bay Packers, Minnesota Vikings, Denver Broncos, Oakland Raiders, and Seattle Seahawks at home and Chicago Bears, Detroit Lions, Kansas City Chiefs, San Diego Chargers, and Panthers on the road. It's safe to say that the Giants schedule in 2013 is easier than 2012.

The Giants have some work to do this off-season after the recent cuts Jerry Reese made.At least the schedule, on paper, makes their path a little easier.