Looking back at the Giants' loss to San Diego on Sunday with our traditional 'Kudos & Wet Willies' review of the action.

Justin Tuck --Two more sacks, a forced fumble and six tackles. With six sacks in two weeks Tuck now has 8.5 on the season. Tuck has been solid all season and the past couple of weeks he has added serious numbers to his resume. He is earning a payday this offseason. Question is, will it be with the cap-strapped Giants?

Hakeem Nicks -- Five catches for Nicks for 135 yards. He was responsible for the Giants' three longest plays of the day -- catches of 51, 43 and 28 yards. Still, Nicks has yet to find the end zone this season. 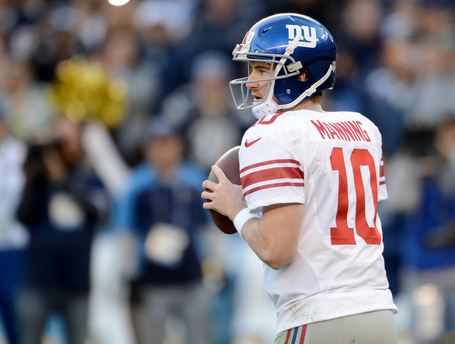 Eli Manning -- Two more interceptions, marking the third time in his career he has thrown at least 20 picks in a season. His career-worst is 25 and with three games to go it's pretty clear that mark is in serious jeopardy. Manning's 20-of-32 looks OK on the stat sheet, but he was awful Sunday. There were several passes slightly off-target, including the one that bounced off Rueben Randle for his first pick. There were ill-advised throws. There was yet another delay of game penalty, with Manning still trying to change a play as the clock ran out. Chargers fans had fun booing and mocking 'ShEli.' He did absolutely nothing to quiet them.

Offensive Line -- Will Beatty gave up his 11th sack of the season. James Brewer whiffed on at least two blocks, nearly got Manning broken in half and showed for the second straight week why the Giants rarely let him see the field for his first two-and-one-half seasons. David Diehl got pushed back into Manning for a sack. The Giants opened a couple of holes for Andre Brown to run through in the second half when the game was out of reach. Big deal.

Special Teams -- An unforgivable offside penalty on a field goal that cost the Giants three points and another awful day returning the ball. Bad penalties, poor kick coverage and pitiful returning have marked the Giants' season. At least Sunday the coverage wasn't awful.

Pass defense -- Terrell Thomas got torched for a 43-yard touchdown by Keenan Allen. There were mis-communications. The Giants could not handle Antonio Gates or Danny Woodhead and could not get the chargers off the field, surrendering 10 third-down conversions in 15 opportunities. Prince Amukamara got turned around repeatedly. By the way, am I the only one who thinks Amukamara has seriously regressed over the past few weeks?

Mathias Kiwanuka -- Really, Mathias? Another foolish unnecessary roughness penalty? That is at least three of those, if not more, on the veteran defensive end this season. He isn't an inexperienced young kid, he should know better. At least, though, Kiwanuka can say he has done something well this season.

Run defense -- No long runs for Ryan Mathews, but he ended up with 103 yards on 29 carries as San Diego ran the ball just well enough.

Andre Brown -- 81 yards on 16 carries, which averages out to a nice-looking 5.1 yards per carry. Almost all of it came in the second half, however, and Brown did commit a critical first-half fumble.

There is really nothing to feel good about after watching the Giants on Sunday. This is a team that has no real strengths to hang its hat on, nothing that really threatens the opposition.

I left the coordinators out of the 'K&WW' discussion, but they are hardly blameless. Sunday marked three straight scoreless first quarters for the Giants. They didn't score in the first half and didn't have a possession that lasted more than seven plays. Defensively, the Giants surrendered points on seven of nine San Diego drives, including four drives of 11 plays or more. Umm, Kevin Gilbride and Perry Fewell, what were you guys doing? On special teams the same problems crop up week after week, and seemingly year after year. Tom Quinn seems to have no answers.

You can make a solid case that the biggest issue on this team is the offensive line, and I believe that to be true. Just about everywhere else you look, however, with the probable exceptions of quarterback and safety, you can argue that the Giants simply aren't good enough.

There are three games to be played, but this season is over. Will the Giants this offseason finally stop fooling themselves into believing they are a championship-caliber team and act aggressively to fix the many issues they have? Four playoff-less seasons in five years is plenty of evidence that changes are needed.