This is the legacy of the New York Football Giants. A long history of opposing quarterbacks picking themselves up off the ground, looking out of their ear holes, and picking turf out of their face masks. Those are the Giants who have had four-sack games.

After Sunday's game against the Washington Redskins we can add Justin Tuck's name to that list. Tuck's performance in that game earned him the honor of being named "NFC Defensive Player of The Week", much to the chagrin of Pro Football Focus (more on that later).

With star defensive end Jason Pierre-Paul sidelined by a shoulder injury, few thought that the Giants already-anemic pass rush would show up against the mobile Robert Griffin III. In response, the Giants' defensive captain turned in one of the finest performances of his career.

So, lets take a look at the film and see how Tuck got it done. 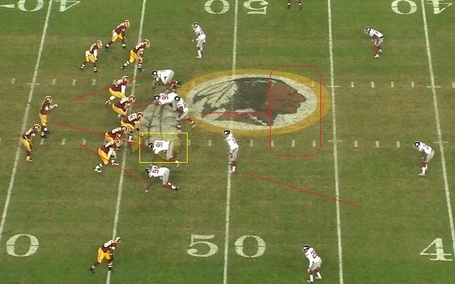 To start the play we see the the Giants in a 4-2-5 set with 3/4 defensive ends, depending on how you want to count Cullen Jenkins. Tuck is at 3-technique, matched up on the right guard. Jon Beason is showing blitz, but will drop back into zone coverage. The secondary is showing 2 deep safeties with the cornerbacks in off man coverage.

As the play unfolds, we see what can only be called "Vintage Justin Tuck" as he uses his athleticism to blow right past the right guard to get the sack. Tuck stays balanced and combines his first step with some very active hands to fend off the guard and keep him on his heels until its time to discard him and get the sack. I'd also like to take this moment to credit Damontre Moore for a very nice bull rush of Trent Williams. That additional pressure limits what Griffin can do and eliminates an avenue of escape. 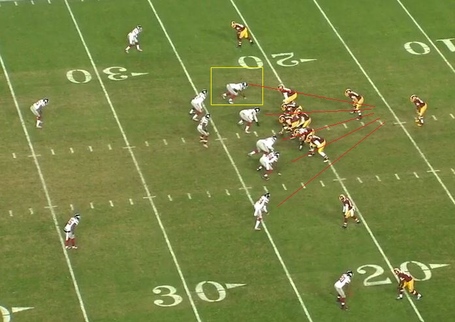 Once again we see the Giants line up in a 4-2-5 set. However this time we see a conventional 2 DE/2 DT line. The secondary appears to Cover-2 shell (teo deep safeties) with the corners in man coverage. However, Terrell Thomas blitzes from the slot.

This time we see Tuck rushing from the left defensive end position. He is initially blocked by the right tackle. However, Griffin pulls the ball down and tries to scramble. Tuck gets around the right tackle and runs Griffin down from behind. Credit to the secondary for some tight coverage on Washington's receivers, forcing Griffin to tuck the ball and run. However, to call this a "coverage sack" does a disservice to the motor and hustle that Tuck showed to run Griffin down. 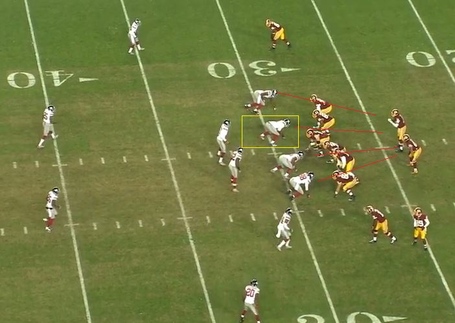 As the caption says, Kiwanuka does a very nice job of getting around the right tackle and forcing Griffin to climb the pocket. However, Tuck does his job as well by shedding the right guard as Griffin comes to him to get the sack. It's actually a rather nifty move by Tuck to get off the block, take a quick hop backward then dart to the outside, around the guard to make the sack. Once again, credit to the secondary for not giving Griffin anywhere to go to with the ball.

As in the previous three plays, the Giants are in a 4-2-5 set, with Thomas in the slot. They are showing two high safeties from the start and the corners are in a tighter man man coverage than in previous plays. Prior to the snap, it would appear that Thomas is in man coverage on the slot receiver.

At the snap we see that Thomas is actually blitzing from the top of the screen. This is an excellently-timed and executed blitz. It forces the right tackle to pick up the blitzer and leaves Tuck unblocked with a free run at the quarterback. Tuck actually just misses Griffin on his initial rush. However, thanks to Mike Patterson (No. 93) and John Hankins ( No. 96) pushing the pocket, Griffin has nowhere to go, and Tuck once again uses his athleticism to get a second run on Griffin, and gets the sack from behind. Tuck gets the glory of the sack, but credit to the defensive tackles for doing the yeoman's work of pushing the pocket. In previous years we've seen missed sacks turn into long scampers or improvised throws by the quarterback. There's no way for that to happen this time. Also, credit to Thomas for a nice blitz, and Perry Fewell for calling it.

Well, there we are. That was certainly a welcome change from last week's trip into the film room. Tuck has been one of the Giants' best defensive players all season, if not the best. This week he finally got some payoff for his hard work. His versatility was on display: Two sacks from defensive end, two sacks from defensive tackle. He got sacks based on his quickness and athleticism, and sacks from his motor and his effort. He got sacks when Fewell called blitzes, and when they rushed four. In short, this was a Tuck we haven't seen since the 2011 playoff run.

Before I move on, a word on the youngin's:

Jayron Hosley: He has gotten very few snaps thus far in his career, even getting pulled in favor of Antrel Rolle for Dallas' final drive last week. This gave us all reason for concern when we learned that he was starting opposite Prince Amukamara. We had every reason to believe that the Redskins would attempt to exploit him. However, his coverage was solid. Particularly in each of Tuck's sacks. He covered his man tightly, and did not give Griffin an option for getting rid of the ball before Tuck got there.

Johnathan Hankins: The big defensive tackle has seen his role grow with the loss of Shaun Rogers for the season. He has been a part of a potent defensive tackle rotation, demanding double teams, pushing the pocket and helping to make runs between the tackles all but impossible against the Giants.

Damontre Moore: The rookie defensive end only saw 17 defensive snaps against Washington. However, considering that he had a total of 23 defensive snaps in the previous 11 games, that is a significant increase in his workload. While Moore didn't make much of an impact on the stat sheet, he still influenced the offense (such as the pressure in sack No. 1, and drawing a chip block in sack No. 3) and the energy he brought to the field was tangible. Probably no more so than after Justin Tuck's first sack when he celebrated like an excited puppy.

In InvictusXI's review of Pro Football Focus' grades, we see that not only is the DPOW not the highest-graded Giants' defensive player, but he is the third. They go on to say this:

On one he legitimately beats Chris Chester, on the second he’s pushed past the pocket and after 5 seconds RGIII drifts into him. On the third late edge pressure from Mathias Kiwanuka pushes the QB into him and on the last he was completely unblocked. Good? Sure. Great? Not so much.

Is that what happened? I have my own opinions, which I won't voice here. But, I hope a closer look at the film has helped you form your own. That being said, this was a tremendous effort by Tuck, a player whom many BBV'ers threw on the scrap heap a year ago. He is fully deserving of being named NFC Defensive Player of The Week (The Giants third recipient of that honor this year).