How do the Giants and Chargers, who have not met since 2009, match up? We break it down.

The New York Giants head to the West Coast Sunday to face the San Diego Chargers, a team they have not played since 2009. Giants' head coach Tom Coughlin calls the Chargers "a very talented team, an explosive team, a physical team."

Let's break down Sunday's matchup like we do every Friday, with our weekly scouting report.

How will Chargers attack the Giants? 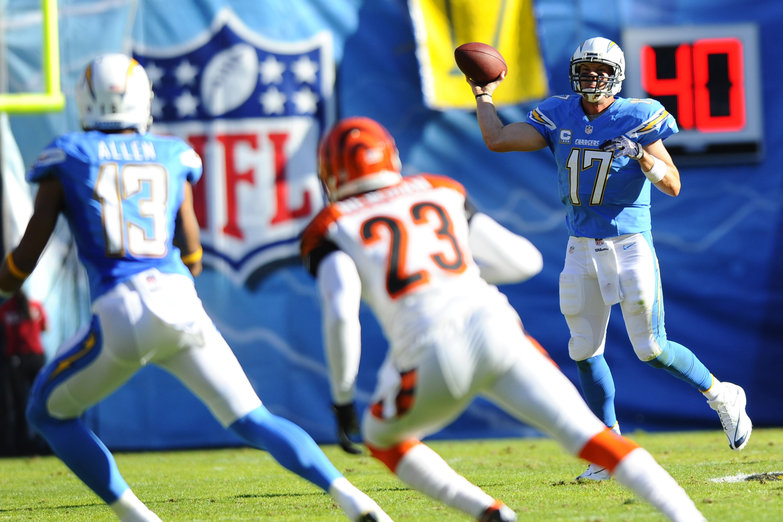 'Bolts From The Blue' proposes a plan for San Diego.

"I really refuse to look at the numbers," said Coughlin.

Quarterback Eli Manning has thrown 18 interceptions, but only four of those have come in the last six game, five of which the Giants won. The Giants are -11 in takeaway/giveaway ratio. During their 0-6 start the Giants turned the ball over 23 times and were -16 in takeaway/giveaway ratio, both league worsts. The Giants have just five turnovers in their last six games (four interceptions and one lost fumble).

Manning has been sacked a career-high 31 times this season. Left tackle Will Beatty allowed all three Washington Redskins' sacks last week. The Chargers don't have any individually dynamic pass rushers and Coughlin expects San Diego to blitz on "upwards of 40 to 45 percent" of their defensive snaps. Offensive coordinator Kevin Gilbride says the Chargers use "as wide an array of blitz packages of anybody that we've faced."

"They're just gambling that you're not going to know where the pressure is coming from and if you don't see it, they're going to get a hit on the quarterback before you can realize where they're vulnerable," Gilbride added.

Can the Giants decipher those blitzes, get them blocked and make some big plays down the field to Victor Cruz, Hakeem Nicks and Rueben Randle? Cruz is hopeful:

"This week we have some opportunities to make some big plays against the style of defense that they run," Cruz said. "We'll see what happens."

Andre Brown leads the Giants in rushing (343 yards, 4.1 yards per carry) despite having played in just four games.

When The Chargers Have The Ball

"Philip Rivers is ... I think the system that he's running right now with the weapons that he has, he's really doing a nice job of just getting the ball out. He knows where he wants to go with the football," said Giants' defensive coordinator Perry Fewell. "He's taking advantage of either man coverage, zone coverage, double coverage. We saw some people, Kansas City double (Antonio) Gates and then hits another, so he's got some good weapons that he uses and really he's a smart quarterback."

The distribution of Rivers' passes is what could be problematic for the Giants. Gates, the veteran tight end, has a team-leading 64 catches, and former New England Patriots' running back Danny Woodhead is second on the team with 61. Rookie wide receiver Keenan Allen has 58 catches.

How will the Giants combat the San Diego offense? Well, this might be a week where linebacker Jacquian Williams -- the Giants' best coverage linebacker -- sees extended playing time. Williams and Spencer Paysinger, the stronger run defender, have rotated at the weak side linebacker spot. The Giants might also be expected to employ the 4-2-5 look extensively, employing an extra defensive back. If Fewell does that it will be interesting to see if he adds safety Ryan Mundy to the mix, pushing Rolle to slot cornerback, or adds a corner and allows Rolle to stay at his natural safety spot.

The Giants are concerned about third downs, where San Diego is second in the league in success rate, have converted 70-of-151 (46 percent).

"That's the money down. That's what we call it because this is how you either get off the field or you extend drives and get points," said Giants' middle linebacker Jon Beason. "They have some big wins in the division against Philly and Dallas, so we've got our hands full."

The Giants may not have Jason Pierre-Paul (shoulder) for the second straight week. The defensive end remains uncertain when he will play again. The Giants' other starting defensive end, Justin Tuck, is coming off a four-sack game that earned him NFC Defensive Player of the Week honors. Tuck will be matched against rookie right tackle D.J. Fluker, a player many Giants' fans were hoping the team would be able to land in the 2013 NFL Draft.

Have the Giants finally straightened out their season-long issues covering punts and kickoffs? Maybe. Over the past two weeks the Giants given up just 50 yards on eight punt returns (6.25 yards per return) and 118 yards on six kickoff returns (19.7 yards per return). Punter Steve Weatherford is averaging 50.9 yards per punt in those two games (46.4 net average).

Giants' field goal kicker Josh Brown is 18-of-20 on the season, has made 14 straight and has not missed since Week 4.

San Diego placekicker Nick Novak is 23-of-26 on the season, 9-for-9 from outside 40 yards. He has made both of his attempts from beyond 50 yards this season. Chargers' punter Mike Scifres averages 43.1 yards per punt and 39.9 yards net. Only 18 of Scifres' 46 punts have been returned.