Share All sharing options for: NFL Picks Week 14: Game-by-game predictions against the spread

Last week was another winning week (barely) picking NFL games against the point spread as I went 8-7-1 (the tie being the Cardinals/Eagles game), bringing my season up to 80-84-5.

The least-anticipated Thursday night game of the season, perhaps forever. I'll take the Texans because ... who cares? 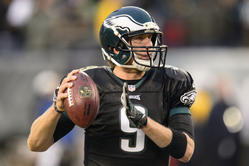 BBV's Dennis Esser tells you what you need to know.

The Ravens haven't been consistent enough to be 7-point favorites over too many teams, but I think they actually match up well with the Vikings. The Ravens are sixth in the league against the run and if the Ravens can stop Adrian Peterson does anyone expect the Vikings to be able to score points? Me, neither.

The Colts are fighting, but since the loss of Reggie Wayne they are just not the same team that beat the Broncos, Seahawks, and 49ers. I don't think the Colts can stop the Bengals on offense.

The Browns are a team that fights every game and they have some promising players (especially Josh Gordon). With the Dark Hoodie always taking away the other teams biggest threat there's no way Gordon goes for 200 yards this week, right? The Patriots' offense is starting to figure some things out -- like get Gronkowski the ball! Julian Edelman is also playing better. I think I'd take the points if the Browns were home, but I'll lay the points with the Patriots away.

There are a few terrible games this week and this is one of them. The Jets beat the Saints and then have basically been awful since. The Raiders traveling to New York to play a 1 p.m. ET game and if you don't think that matters (west coast flying east to play early games) then check out the Chiefs/Redskins spread. I still like the Jets' defense, though the offense has been historically abysmal as of late.

The Eagles are grooving, but I think this week Nick Foles will look human because the Lions front four can get after it and Foles doesn't have a ton of pocket maneuverability. Just look at the way the Lions feasted on the Packers last week. Now the Eagles line is better than the Packers line, and I think Chip Kelly could have a few wrinkles, but I think the Lions have a big game and I like them to win outright.

No matter how bad the Steelers play as long as Dick Lebeau is the defensive coordinator I'll like his chances against young quarterbacks. Ryan Tannehill has flashed, but has been a bit turnover prone as well and the Dolphins offensive line is missing two starters and is not playing very well. Give me the Steelers at only -3 points.

I thought the Buccaneers would give up a long time ago, but they seem to still be playing hard, (but still losing). This game is like the Lions-Eagles game for me. There's one team that has a young quarterback who has a big arm and is playing well, but going up against a team that can rush the passer. The Bills lead the league in sacks with 43, and if E.J. Manuel hadn't missed nearly half the season this team is likely in the middle of the playoff race with their terrific running game and solid defense.

This screams Vegas shenanigans, doesn't it? Why are the Chiefs, who have only lost three games this season (two of them to Peyton Manning), only favored by three points to a team that just lost to the lowly Giants at home. I can't figure this spread out, and so I'll attribute it to the 1 p.m. start, but it's still a weird line for me which makes me nervous, but I'll take what seems like the layup and grab the Chiefs minus 3 points.

These are two teams I've picked almost every week. I like the Titans except at quarterback, but the rest of the roster is solid. The Broncos can blow out anyone if Peyton Manning is on and he often is, but the weather is suppose to be cold and snowy on Sunday, which could limit big points. I think the Broncos win, but I'll take the points.

The Rams have done a nice job of forcing turnovers this year (most forced fumbles with 17), creating sacks, picking people off here and there. The Cardinals on the other hand have one of the most turnover-prone quarterbacks in the league in Carson Palmer. This is a divisional matchup and the Cardinals are getting too many points. I think the Cardinals win, but the Rams make a few big plays on defense to keep this game close.

I'll take the Giants here even though it won't surprise me if the Chargers win by more than a touchdown. The Giants have no pass rush, and Philip Rivers is completing 70 percent of his passes, a trend that is easy to imagine continuing with the likelihood that JPP misses this game. Also Danny Woodhead seems like the little type of back that would give the Giants plenty of problems, the Chargers don't rush the passer all that well (29 sacks on the year), but you don't have to be great at rushing the passer to beat up on the Giants this year. With all that being said, I'll go the homer route. The Giants have been playing better as of late, they are not a team that has historically had trouble traveling, and the Chargers pass defense is about as bad as the Redskins was so I think Eli's in for another nice game.

This is probably the best game of the week. The Saints are terrific at home, but this Panthers are on a roll. I'm not sure why I like the Panthers in this game, but I think they can put up points on the Saints' defense and I think the Saints will have trouble scoring. I also think the Panthers and Cam Newton are trying to prove they are legit and this is a huge stage for them.

These are basically the same teams. Both teams put up a lot of offense and give up a ton of yardage on defense, but excel at creating turnovers. The difference is the Bears will be trying to turn over Tony Romo while the Cowboys get to pick (most likely) on Josh McCown.