Eli Manning and Philip Rivers: A look back at the trade

A look back at the 2004 trade the Giants made with the San Diego Chargers to acquire Eli Manning.

Share All sharing options for: Eli Manning and Philip Rivers: A look back at the trade

How would the past decade have been different for the New York Giants if the Philip Rivers for Eli Manning swap had never taken place on draft day in 2004? With the Giants traveling to the West Coast to face the San Diego Chargers this week we get to ponder that question.

Our friends from SB Nation's Chargers web site 'Bolts From The Blue' have already opined on the matter, including Pittsburgh Steelers quarterback Ben Roethlisberger and his place in all of this. 'Bolts' offered the assertion that the Chargers were the "clear winner" in the 2004 NFL Draft game of quarterback roulette because they "won the trade by getting the most value of any of the three teams simply by trading down a few slots."

Oh, really? Let's see about that.

The Giants, obviously, surrendered a lot here in terms of talent. Thinking back I would have been perfectly content had the Giants simply selected Roethlisberger. What did the Giants get in return? Well, two Super Bowls thus far and, despite this season's struggles, the possibility of more before Manning is done. I'd say they made out pretty well. 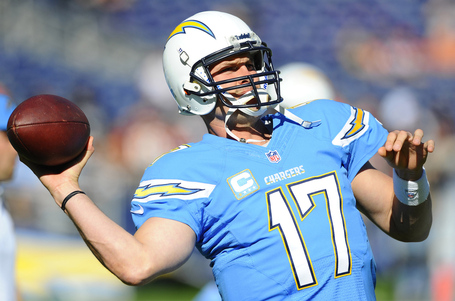 The former Giants' GM was the driving force behind the acquisition of Manning, and the one who eventually convinced both Giants' ownership and Chargers' GM A.J. Smith to make the move.

Accorsi explained his conviction on the need to get Manning instead of Rivers, Roethlisberger or even Schaub in Ralph Vacchiano's book, 'Eli Manning: The Making of a Quarterback.'

"I just believe that you can get by if you have to, but if you have a chance to pick what you think is a quarterback for the ages, you have to go after him because you're not going to get that many opportunities in your life," Accorsi said. "It's not any big, cryptic mystery why I feel that way. I've been around great ones. I know what they mean."

"You can't give up too much for Elway," Accorsi said. "You can't overpay DiMaggio."

Manning might not be Johnny Unitas, the player Accorsi compared him to before drafting him. He may not be Elway. And he may not be a historically great player like DiMaggio.

He is, however, the best quarterback the Giants have ever had and those two Super Bowl titles are hard to argue with. I doubt any Giants' fan would complain about how things have turned out. 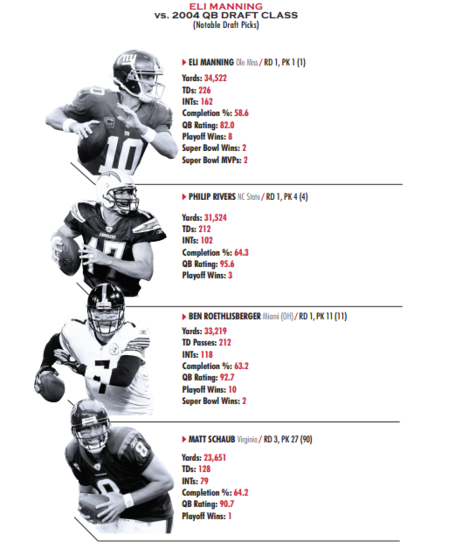 Manning vs. Rivers vs. Roethlisberger

We have to go back to 'Bolts' for a minute. Here is what John Gennaro writes about the trio, and about those Giants' Super Bowls:

"Eli Manning deserves credit. He comes through in big moments and he's not a terrible QB, not even mired in the middle of his worst season ever in 2013. However, Rivers has shown an ability to do the same when there's good coaching and a good team around him. It's easy to imagine the Giants still having two Super Bowl victories had they instead drafted Rivers or Roethlisberger."

That, of course, is pure conjecture. Back in the heyday of the Giants-San Francisco 49ers rivalry I used to wonder what would have happened if Phil Simms was a 49er and Joe Montana a Giant. It's fun to imagine, but it's speculation. All we can really do is look at the facts.

Manning, statistically, is not the equal of Rivers or Roethlisberger at this point in their careers. His completion percentage is lower, his passer rating is lower and he has thrown many more interceptions than either (Manning 162, Roethlisberger 118, Rivers 102).

We aren't, however, judging a beauty pageant. We are judging winning. We are judging places in history. We are judging whether or not these three quarterbacks wound up in the right places. My guess is history will treat this decision by Accori and the Giants kindly. Very kindly.

Rivers is a good, maybe great, quarterback. Is it his fault that the Chargers have been a mess the past few seasons? Probably not. Does the fact that his teams are 3-4 in the playoffs and that his passer rating dips from 95.6 to 79.2 in those seven games mean he couldn't have won Super Bowls in New York? Maybe. Maybe not.

Roethlisberger has two Super Bowl titles and superior regular-season stats compared to Manning. Could he have been similarly successful in New York? Talent-wise, maybe. His skill-set certainly seems like a fit for what the Giants like to do. Then again, considering some of the off-the-field troubles Roethlisberger has had you wonder if he would have survived the media scrutiny in the Big Apple.

In the end, none of the what-ifs matter. What matters is that when the Giants pulled the trigger on the Rivers-for-Manning trade rather than drafting Roethlisberger, which is what Accorsi admitted in Vacchiano's book he would have done if he could not trade for Manning, the Giants sought a quarterback who could lead them to championships.

They got one. Case closed.

Next Up In NFL