Let's look beyond the Giants-Redskins game today and predict which Giants' unrestricted free agents return in 2014.

Before every New York Giants' game we offer a prediction on the outcome. Today will be no different, but in truth the game against the Washington Redskins takes a backseat to the continuing discussion about what the Giants will look like in 2014.

Let's look into the crystal ball and predict which coaches and unrestricted free agents will return to the Giants in 2014. We will use a combination of Spotrac's list of Giants' 2014 free agents and a similar one from Over The Cap.

Justin Tuck -- Completing his best year since 2010. Keeping him will cost more than the two-year, $8.5-million deal Osi Umenyiora signed with the Atlanta Falcons. He wants to stay and I can't see the Giants letting him leave. Prediction: Stays 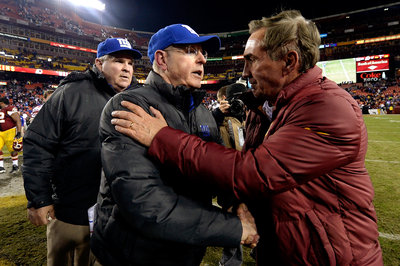 Corey Webster -- Do we even have to discuss it? Prediction: Goes

Hakeem Nicks -- My guess is that Nicks' conciliatory comments on Friday were a way of angling for the franchise tag, since it will be worth more than $10 million, and it seems unlikely he will get that on the open market off his 2013 performance. I still believe Nicks will be catching passes from Cam Newton next season. Prediction: Goes

Terrell Thomas -- I hate myself for this. Prediction: Goes

Linval Joseph -- The Giants signed Chris Canty for six years and $42 million. Bary Cofield got five and $36 million from Washington. Joseph is better than either guy, and the Giants can't pay him. Prediction: Goes

Keith Rivers -- Can you think of a good reason to keep him? Prediction: Goes

Jon Beason -- The Giants can't break the bank for him, but they need what he brings to them. Prediction: Stays

Curtis Painter -- If the Giants carry two QBs next season and he is one of them, that is a problem. Prediction: Stays

Josh Brown -- No need for Giants to look for an upgrade. Prediction: Stays

Louis Murphy -- Why is he here, anyway? Prediction: Goes

Brandon Jacobs (IR) -- Thanks for the memories. Prediction: Goes

Peyton Hillis -- The Giants need to be better. Prediction: Goes

This does not consider potential salary-cap cuts like David Baas or Chris Snee, or any of the restricted free agents

No, I didn't forget about today's Giants-Redskins game. The Redskins are a fractured organization with a team in disarray. The Giants are not, and have won six of nine since starting 0-6. I have no reason to believe the Giants won't win today.