Which members of the Giants' offensive coach staff should stay in 2014? Which should be replaced?

Share All sharing options for: Offensive Coaching Staff: Who stays, who goes?

We conclude our look at which New York Giants' coaches should return in 2014 by turning our attention to the offensive coaching staff. That means offensive coordinator Kevin Gilbride is in the cross-hairs once again.

Do the Giants need to make changes to their defensive coaching staff?

Time for Tom Quinn to go?

Should special teams coach Tom Quinn lose his job after an awful season?

Defensive Coaching Staff: Who stays, who goes? Time for Tom Quinn to go?

So, let's not do it again. Let's just get right to the prediction part, and many of you aren't going to like it. Best guess is that Gilbride, with support from head coach Tom Coughlin, quarterback Eli Manning and many of the players on the offense, will be given the opportunity to return in 2014 and fix what went wrong.

Sean Ryan, quarterbacks -- Ryan has worked his way up from offensive quality control coach, to wide receivers coach to quarterbacks coach, where he has spent the last two seasons. After four straight seasons with a completion rate above 60 percent, Manning has finished below that 60 percent mark in each of Ryan's two seasons. This season, of course, has been Manning's worst since his pre-Super Bowl winning days.It has been obvious as the season has progressed that Manning's accuracy has regressed, along with his footwork and fundamentals.

It's easy to argue that Ryan is in over his head as quarterbacks coach. He had no experience doing that job prior to taking over the position when Mike Sullivan left the Giants to become offensive coordinator of the Tampa Bay Buccaneers. Ryan had worked at Harvard as recruiting coordinator, running backs coach and JV coach.

Manning wants Gilbride back as coordinator, but it's obvious that the Giants need to help him regain his championship form. If Gilbride stays, part of that help for Manning has to come in the form of a quarterbacks coach with the experience and the pedigree to actually coach a two-time Super Bowl MVP quarterback. The results the past two seasons make it appear that Ryan isn't that guy.

Jerald Ingram, running backs -- The Giants went through six starting running backs and two fullbacks this season, three if you count Bear Pascoe as a fullback. The Giants are 31st in the league in yards rushing per game (80.7) and 29th in yards per carry (3.5). They also can't run a screen pass properly, and the pass protection from the running back slot has not always been good.

Question is, how much of this is Ingram's fault?

The answer? Probably not a whole lot of it. Ingram has been the giants' running backs coach for 10 years, and this has to be the most difficult season he has experienced at the running back position.

If you want to downgrade Ingram because David Wilson didn't develop the way the Giants needed him to, fine. Remember, though, that Ingram has coached Tiki Barber, Brandon Jacobs, Ahmad Bradshaw and Derrick Ward to great success, and that fullbacks Madison Hedgecock and Henry Hynoski have also thrived during his tenure.

There really is no reason for the Giants to look elsewhere for a running backs coach. It seems like they already have a quality one.

That discussion doesn't even consider whether or not the younger Gilbride deserves to stay in his role as receivers coach, a position he has held for the past two seasons.

Miscommunications between quarterback Eli Manning and his receivers have become too commonplace in the Giants' complicated passing attack. Is that because limits on practice time imposed by the CBA make it difficult to master the options in the pass routes? Or, is it because the younger Gilbride has not been capable of getting young receivers like Rueben Randle and Jerrel Jernigan, and a newcomer like Louis Murphy Jr., to understand the intricacies of the offense?

Gilbride Jr. should know his father's offense. He should also know how to coach receivers since he did so during collegiate coaching stops at Temple, Georgetown and Syracuse.

If his father stays the younger Gilbride probably also stays. That would seem like the proper decision.

Mike Pope, tight ends -- Pope has had two tenures as a Giants' coach, covering a total of 23 years. He has been an NFL assistant coach for 31 season. Tom Coughlin calls Pope "the best tight ends coach in football." Pope is the only coach to have participated in all five of the Giants' Super Bowl appearances.

Pope isn't going anywhere unless he chooses to walk away. Nor should he. If Brandon Myers, Larry Donnell and Adrien Robinson can't succeed under Pope's tutelage that is on them. 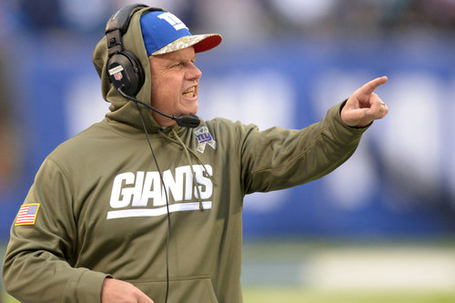 Pat Flaherty, offensive line -- The struggles of the offensive line have been the biggest issue for the Giants on offense this season. As we asked in reference to Ingram and the running backs, is that on Flaherty or is it simply that the Giants did not have enough talent to overcome injuries to starters David Baas and Chris Snee?

Flaherty has been the Giants' offensive line coach for 10 years and an NFL coach for 14 seasons. During his tenure with the Giants the team's offensive line has usually been among the league's best. What happened this season is less about Flaherty than it is about Giants' GM Jerry Reese waiting too long to re-stock an aging offensive line. That and Will Beatty having an awful season after signing a five-year, $37.5-million contract.

Flaherty has long been considered one of the best offensive line coaches in the business. The Giants don't need a new line coach. They need better linemen.

NOTE: Vote in our poll and let us know if you believe Gilbride stay or go.