Will Perry Fewell get the ax when the season ends?

Share All sharing options for: Defensive Coaching Staff: Who stays, who goes?

As we continue look at which New York Giants' coaches could, and should, return in 2014 let's turn our attention to the defense. That group has, in many ways, been better this season than it was in 2012. Will that be enough warrant keeping the current staff? Let's take a look.

The Giants' special teams have been awful in 2013. Will that cost Quinn his job?

Jerrel Jernigan has made the most of an opportunity. We look at his last two games.

Entering the 2013 season most analysts -- including this one -- figured that if Fewell could get the Giants to improve from having been the league's 31st-ranked defense in 2012 to a middle of the pack group this season the high-powered offense would get the Giants back to the playoffs.

It hasn't worked out that way, but Fewell's defense has been better. The Giants are 21st in yards allowed and 20th in points per game, giving up 25.7. Some of those points, of course, have come off special teams mistakes and offensive turnovers. The defense has shut down some of the league's top running backs, and Justin Tuck and Antrel Rolle have played some of the best football of their careers.

Fewell is completing his fourth season as Giants defensive coordinator. Does he deserve a fifth? Only in the Giants' 2011 Super Bowl season, when the defense was ranked sixth in the league, have the Giants been a dominant defense. The other three seasons they ranked 26th, 31st and -- this season -- 21st.

Fewell is a technically sound, smart coach. His tenure with the Giants has been marked, however, by a seemingly constant push/pull between the coordinator's desire to run complicated coverages and schemes that require perfect communication and technical perfection vs. players who want the freedom to be aggressive, instinctive and play what they see. There have been some curious game plans and there always seems to be the impression -- deserved or not -- that Fewell does not like to turn the pass rush loose.

Traina, in her post for Bleacher Report, points out that perhaps most damning for Fewell is that the Giants were 30th in 2012 and are 27th this season in stopping opponents on third down.

While all of the attention of the media and the fan base have been focused on offensive coordinator Kevin Gilbride perhaps it is Fewell whose job is in greater jeopardy. While Gilbride's offense has been poor this season, he has had a long run of success. Fewell's record, on the other hand, is spotty during his tenure.

Now let's look at the position coaches. If Fewell goes everything could change here, but let's look at each coach on his own merits.

Robert Nunn, Defensive Line: Nunn has been coaching the Giants' defensive line since 2010. He has, thus, had a hand in the development of both Jason Pierre-Paul and Linval Joseph. You could, perhaps, downgrade Nunn because of the Giants' pass-rush issues the past two seasons -- 33 last season and 31 (25th in the league) this season. Injuries, scheme and lack of dynamic pass-rushers at the linebacker position likely have more to do with that, however, than coaching.

While the pass rush has not always been there the Giants have played well against the run this season.

The two rookies under Nunn's tutelage this season have been a mixed bag. Johnathan Hankins has become part of the tackle rotation, and his +7.7 grade from Pro Football Focus vs. the run is the team's third-highest. Damontre Moore remains a work in progress and is a player the Giants hope develops into a dynamic pass rusher.

There really seems to be no reason for Nunn, a 26-year coaching veteran, to be replaced. He should get to come back next season. 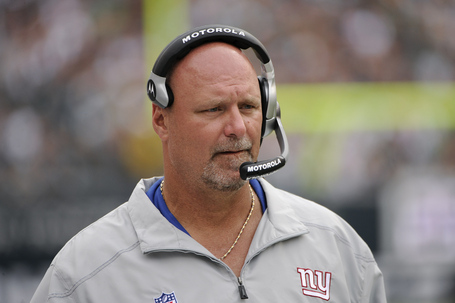 Jim Herrmann, Linebackers: As the BBV 'Beezer Brigade' will tell you, the lack of play-making from the linebacker position has long been an issue for the Giants on defense. Herrmann has been coaching Giants' linebackers since 2009. Is this his fault, or is it a lack of talent?

My vote? Lack of talent. Since drafting Gerris Wilkinson, who was a bust, in the third round of the 2006 NFL Draft, the Giants have only used one pick above the fourth round on a linebacker.

Below, taken from an examination of the defensive coaches by Pat Traina, is a look at the linebackers drafted by the Giants during the Tom Coughlin era.

There isn't an impressive player in the bunch. Going back to 2007, Jones, Tracy, Dillard, Goff and Sintim are out of the league. Williams isn't anything special. Kehl is hanging around as a journeyman special teamer. DeOssie quickly became nothing more than a long-snapper.

Herrmann has gotten decent play out of undrafted players like Chase Blackburn and Spencer Paysinger. The mid-season trade this year for Jon Beason, a huge upgrade over Dan Connor or Mark Herzlich, finally gave the Giants a presence at middle linebacker.

You can complain about the talent the Giants have not had, and still don't have, at linebacker. It is hard, however, to complain about Herrmann's work. He should get to stay.

Herrmann, in fact, might be a name to watch as a potential defensive coordinator. He held that job at the University of Michigan for nine seasons before spending the last eight years coaching linebackers in the NFL. Chiip Kelly interviewed Herrmann for the coordinator job with the Philadelphia Eagles last offseason.

Peter Giunta, Cornerbacks/Secondary: The Giants have given up 45 passing plays of 20 yards or more this season, only five longer than 40 yards. That is a dramatic improvement over 2012, when they gave up 73 plays of more than 20 yards -- 13 longer than 40.

Giunta is completing his seventh season as Giants' cornerbacks coach. The Giants have never developed a true shutdown corner during Giunta's tenure, but players like Prince Amukamara, Terrell Thomas and Corey Webster have all been successful.

You could, if you choose, fault Giunta for the slow development of 2012 third-round pick Jayron Hosley. That, however, may have more to do with injuries and missed practice time than anything else.

If Fewell returns Giunta is probably safe although his status might be the most tenuous of any of the defensive position coaches. Should the Giants want to make a change there former Giant cornerback Sam Madison deserves consideration. Madison was a coaching intern for the Giants during training camp. He took to the job well, and players seemed to respond to him.

Dave Merritt, Safeties: Merritt is in his 10th season with the Giants, and his eighth as safeties coach. Merritt is a booming voice from behind the secondary during Giants' practices. Merritt has had success with first-round picks like Kenny Phillips and Antrel Rolle, as well as players like Stevie Brown and Will Hill. Going way back, Gibril Wilson played the best football of his career under Merritt's tutelage.

There is no reason for Merritt to go anywhere.