The Giants face many questions this offseason. Here, they are broken down into five general categories.

The New York Giants won't make the playoffs, marking four of five seasons that has happened. The Giants will, however, enter the offseason feeling much better about themselves than anyone could have expected following a disastrous 0-6 start to the season.

The Giants have gone 6-3 since that start. While most of the wins have not exactly been picturesque, regardless of what happens in Sunday's season finale the organization can head into the offseason feeling like enough good things happened during the final two-thirds of the season that they can have reason for optimism.

That, however, does not hide the fact there is much work to be done restore the Giants to championship contention. In five broad categories, here are the decisions the Giants face heading into 2014. We will talk in more detail about many of these throughout the offseason, but for now let's lay them out in generic fashion.

Fixing the Giants: A four-part plan

The Giants are broken. 'Invictus' offers an extensive plan for putting Humpty Dumpty back together again.

Fixing the Giants: A four-part plan

Let's work with the assumption that head coach Tom Coughlin is going to remain because, well, it would be an absolute bombshell if that isn't the case. With the Giants still playing hard, the respect Coughlin carries within the organization, and his apparent desire to remain on the sidelines there is little reason right now to believe he won't be back.

That same assumption can't be made for Coughlin's coaching staff.

We have debated the future of offensive coordinator Kevin Gilbride ad nauseum at this point. You can make valid arguments on both sides of the 'should he stay/should he go?' debate. The defense has played better the second half of the season, but there is no guarantee Perry Fewell is safe for 2014. The special teams have been an abomination. Will Tom Quinn finally pay a price for that?

Beyond the top lieutenants, will there be changes among the position coaches? You can make a strong case that quarterbacks coach Sean Ryan could be on the hot season. Eli Manning, whose fundamentals broke down toward the end of the season, has regressed over Ryan's tenure as quarterbacks coach. The franchise must fix Manning, and could look elsewhere to do it.

It seems inevitable that the coaching staff looks somewhat different in 2014.

Fixing this broken-down unit has to be Priority 1 -- and maybe Priority 2 and 3 -- for the Giants this offseason. Manning has been sacked a career-worst 39 times, and many of his fundamentally poor throws in recent weeks can be traced to his lack of trust in the guys trying to block for him. The running game is 31st in the league, mostly because the line hasn't given the running backs any place to go.

The Giants have decisions to make on veterans David Baas, Chris Snee, David Diehl and Kevin Boothe. The most likely to return would seem to be Boothe. Are youngsters James Brewer, Brandon Mosley and Jim Cordle players they can build around on the interior? What do they do about Will Beatty, suffering through a horrible year in his first season after signing a five-year, $37.5-million deal? Beatty is an enigma, excellent in 2013 but awful in 2013.

Do the Giants dip into the free-agent pool for help? How early do they draft a lineman, and how many picks do they use on that position?

We mentioned some of the players who fit into this group above when talking about the offensive line. Offensively, there is a question about tight end Brandon Myers. What about running back, where Andre Brown can be a free agent? Will the fullback be John Connor or Henry Hynoski? On defense there are a great many players will undecided futures? Linval Joseph, Justin Tuck, Mathias Kiwanuka, Jon Beason, Keith Rivers, Terrell Thomas, Ryan Mundy, Corey Webster and even Antrel Rolle probably fit into this category -- and likely several others.

Young Players to Build Around

Will David Wilson be healthy enough to continue his career? Even if he, can he be a featured back? We already mentioned Brewer and Mosley. Do the Giants have faith in either Larry Donnell or Adrien Robinson as a future tight end? What do they think of Damontre Moore and Johnathan Hankins? What about linebackers Jacquian Williams and Spencer Paysinger? 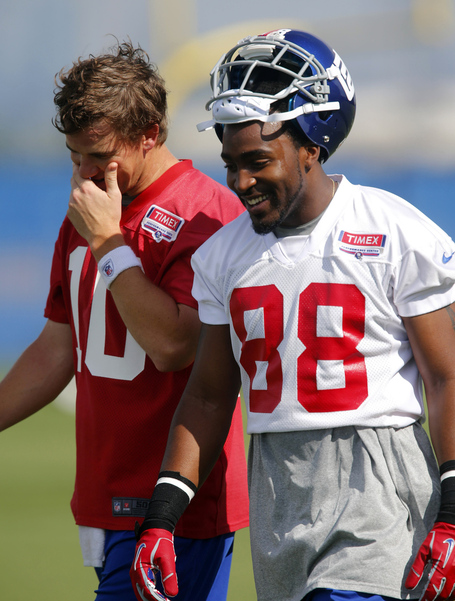 Hakeem Nicks is almost certainly out the door. Do the Giants have enough playmakers on the outside to replace him? Can Reuben Randle fill Nicks' shoes? Can Victor Cruz flourish without Nicks? Can Jerrel Jernigan really contribute, or is this nice stretch he is having just a tease? Do the Giants spend a high draft pick on a receiver? Do they dip into the free-agent market for a big name?

As I said above it is excellent that the Giants are finishing the season feeling better about themselves than they might have. There is much work to be done, however, and John Mara, Jerry Reese and Co. can't be fooled into thinking everything is fine. This team is not good enough to contend for a title -- upgrades in personnel are needed at many positions. A crucial offseason will begin soon for the Giants, and how well they handle it will determine how quickly this team returns to championship contention.