Facing fourth-and-7 at the Detroit Lions' 42-yard line in overtime Sunday, New York Giants coach Tom Coughlin faced a game-defining decision. Go for the first down, try an extremely long field goal placekicker Josh Brown felt he could make indoors at Ford Field or punt and try to pin Detroit deep in its own territory.

Coughlin, with quarterback Eli Manning lobbying for the move, went for it. Manning completed a 15-yard pass to his new favorite receiver, Jerrel Jernigan, and the Giants went on to win, 23-20.

"Either let's go for it or kick it and go for the win," Manning said. "I know I didn't want to punt it there and I wanted to try to win this thing or go for it and be aggressive. He said, ‘We're going for it.'"

"We were into overtime, guys had played a lot of plays," Coughlin said. "Let's see if we can make a play to put ourselves into position to end the game and we did." 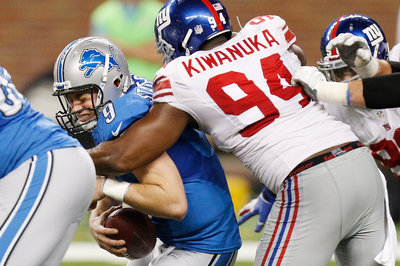 The Giants knew when they signed Hill that he had the kind of talent that could decide games. That talent was worth taking on the baggage, since they believed themselves to be deep at safety and figured they were covered if Hill didn't work out.

Now, though, he has played himself into an extraordinarily valuable position as one of their starting safeties. They face a dilemma with Rolle this offseason, as they likely can't afford to take him back at his $9.25 million cap cost next season and aren't sure he'll accept a pay cut or what it would take to extend him beyond 2014. If they have to part company with Rolle, then with Stevie Brown coming off ACL surgery Hill becomes the closest thing they have to a sure thing at safety. And Hill is never going to be a sure thing.

This is what the Giants have been waiting for with Jerrel Jernigan.

And this is what Jernigan has been waiting to show the Giants.

With Victor Cruz gone for the final two games following knee surgery, Jernigan moved into the slot receiver spot and came up big in Sunday’s 23-20 overtime victory over the Lions. Jernigan had six catches for 80 yards, including his first NFL touchdown and the key sliding grab to set in OT to set up the game-winning field goal.

He suffered a stinger in his left shoulder in the third quarter. An opposing player stepped on his left foot. The flu bug that is spreading quickly through the Giants’ locker room caught up to him Sunday morning, too.

An exhausted Tuck did not even take much time to reflect on his second career interception after the game while speaking to reporters, with his right knee wrapped in ice and propped up on an equipment bag.

Asked if he considered tapping out and remaining on the sideline, Tuck replied: "No. That’s just not me. If I can go, I’m gonna go. That’s just always how I’ve always approached it. I think any time I come out of the game, I’m letting my teammates down and I never want to do that. Guys are out there fighting and that’s what I expect all of us to do – not only myself, but I think all of us would do the same thing."

For better or worse, these players and coaches stood on for the Giants in Detroit.

35 years later, ex-Giant Pisarcik takes 'The Miracle at the Meadowlands' in stride | NJ.com

"I get upset sometimes that it defined my career, because I played nine years of professional football," he said. "But to me the true test is how you react to it. Do you get up and dust yourself off? The truth is, a lot of good things happened to me because of that play."