Step into the film room to take a look at two of the Giants' young offensive line options.

It finally happened. Brandon Mosley finally got meaningful snaps on the offensive line for the New York Giants.

Unfortunately, much like the man he replaced, his opportunity came from an injury rather than being given an opportunity based on his own merits. Or even because of the poor play of a veteran in front of him.

Mosley is largely a mystery to Giants' fans, so let's start with a bit of background before delving into the film of both Mosley and Brewer.

Going into the 2012 NFL Draft, Mosley was generally considered a raw but high-upside, third-round prospect. It was thought that he had the ability sneak into the second round if a team fell in love with his quickness, strength, athleticism, and general nastiness as a blocker. However, he lasted until the end of the fourth round, which is where the Giants took him with a compensatory pick (131st overall).

Mosley spent his rookie season on injured reserve, but got an opportunity to start in preseason when David Diehl went down with a hand injury. When James Cordle went down against the Cowboys in Week 12, third-year player James Brewer (finally) got his chance to play, and showed immediate dividends, though he has had mixed performances since.

Brewer suffered an injury against the Seattle Seahawks, and Mosley got his chance to play in place of Brewer.

So let's see how the two fared at the same position against the same opponent.

To get a somewhat representative look at the two, I picked two passing plays and two running plays to look at for each. 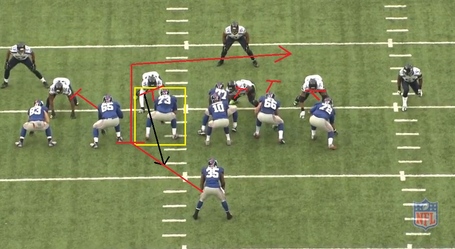 As you can see, the Giants are lined up with Eli Manning under center and Andre Brown as the lone back. This play has Brown chipping the defensive tackle before slipping out between the defensive line and linebackers.

As we move forward a couple seconds, we see that the defensive tackle initially has Brewer back on his heels, while Brown is getting ready to deliver his chip block. The other rushers are accounted for (including the right defensive end, who is just out of screen). 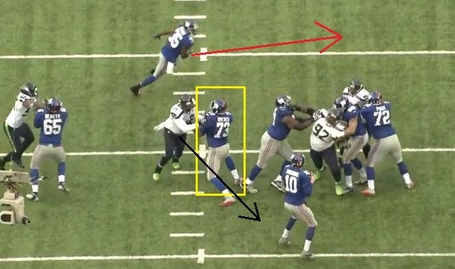 A couple seconds along we see that Brown's chip block has allowed Brewer to re-anchor and gain control of his assignment. Also, Eli has seen that No.92 has broken free of of Kevin Boothe and David Diehl and is now looking for Brown in the flat. 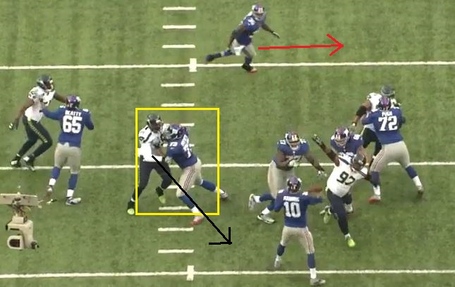 In the final frame we see Brewer still controlling his man while No. 92 is completely past Boothe and Diehl. Beatty and Pugh are both in control of their assignments and Eli has the pass on its way to Brown (who catches it for a three-yard gain).

For this play, I picked a screen pass, to get an idea of Brewer's ability out in space.

In the second frame we see Brewer initially blocking the defensive tackle while Brown starts his route. At this point the play looks like a normal play with the offensive line forming a pocket while Manning drops back to make his reads. 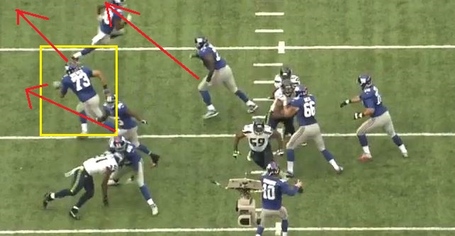 In the third frame Brewer has let his man go to get out in space to set the screen, as is Boothe. Brown is turned around and looking for the ball. 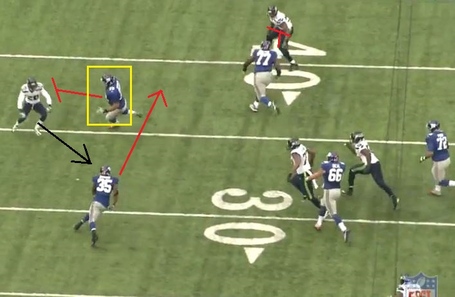 In the final frame, Brown has the ball with lots of green in front of him Boothe has his man blocked up well. Unfortunately, Brewer was too aggressive getting out in space and over-ran his blocking assignment, basically leaving the defensive back unblocked.

To start the first running play we see the Giants in the shotgun, with Andre Brown beside Eli as the running back. 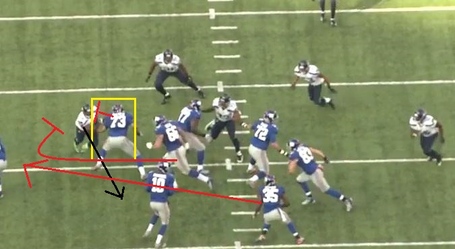 As we move ahead a couple seconds, the defensive tackle Brewer is assigned to block used a nice fake to get Brewer to start to the inside, while he rushes to the outside. Luckily, David Diehl is pulling from his spot as left guard to assist.

As we move forward another couple seconds, Diehl has arrived and the two have control of the defensive tackle. Brown has the ball with a crease opening up. 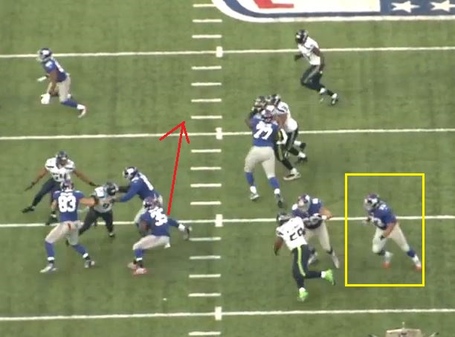 In the final frame, we see Brewer and Diehl have ushered their man far past the play, which is blocked up nicely. There's a lone man between Brown and a lot of open real estate. Unfortunately, the turf monster strikes as Brown makes his cut. Brown trips and the run only goes for a short gain. 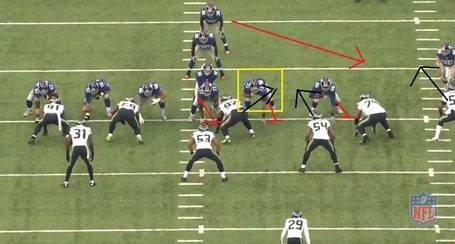 To start this play we see the Giants in a power I formation with Brown as the running back and John Conner as the fullback. Also note that Mosley is in at Jumbo Tight End on the right side of the line. The run is designed to go to the left.

In the second frame Brewer and Boothe are double-teaming No. 92. No. 79 has beaten Will Beatty with a nice swim move, however Conner is coming up to handle him. 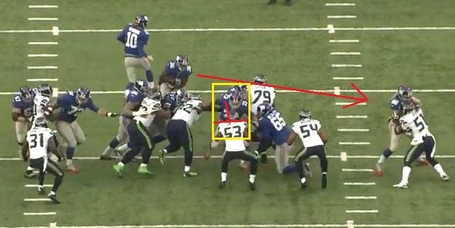 Brewer has passed No.92 off to be handled by Boothe while Brewer steps up to take care of the linebacker at the second level. It's tough to see behind Brewer, but Conner is engaged and blocking No.79. 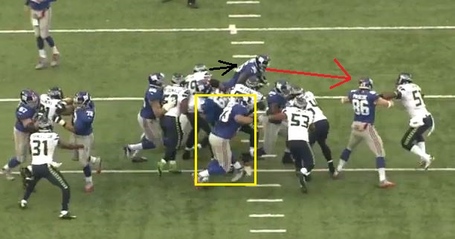 In the final frame we see that Beatty has recovered and is blocking No.54. Brewer isn't locked in on No.53, but he won't affect the play. It's basically impossible to see behind the pile of bodies, but Diehl has let his man past him, and he has Brown from behind. The Seahawks did an excellent job reading the play and building a wall at the line of scrimmage here.

The Giants start out this play in the shotgun, with Peyton Hillis beside Manning.

As we go forward a couple seconds, Beatty and Mosley have the right defensive end double teamed and blocked up well. The Seahawks are only rushing three on this play, so Pugh and Diehl can double team the left defensive end as well.

In the third frame we see that Beatty and Mosley still have their man locked up, while Pugh has taken sole responsibility for the left defensive end. The nose tackle is proving too much for Boothe to handle one-on-one, and Diehl is on his way back to help.

In the final frame we see Mosley still trying to block the right defensive end who is making a second effort to get to Eli, even after the pass is away. The nose tackle and Boothe have tripped in the end zone. This pass goes to Jernigan for a nice gain.

To start the second pass play, we see the Giants once again in the shotgun, with Hillis beside Manning. The Seahawks are rushing four this play.

Right after the snap, we see the right defensive tackle initially match up on Mosley. Hillis checks for a blitzer before starting out on a route. Beatty, Pugh, and Diehl all have one-on-one matchups. 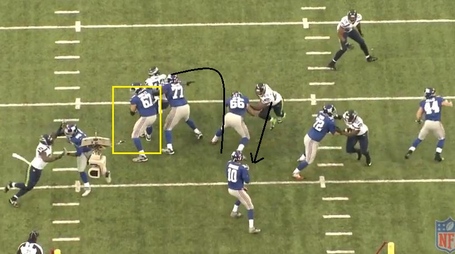 In the third frame, the right defensive tackle is trying to scrape across the line into the right A-gap, between Boothe and Diehl. This basically leaves Mosley with nobody to block for the remainder of the play. On the outside Beatty and Pugh are holding up well, while on the inside Diehl is beaten by the left defensive tackle. 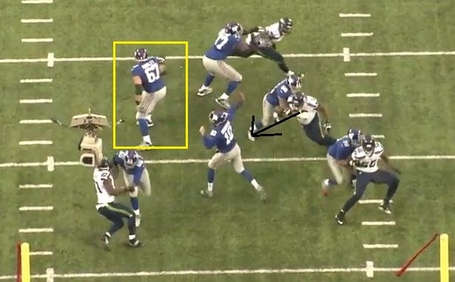 In the final frame, Manning's release beats the rusher who beat Diehl. Beatty and Pugh have pushed their assignments well around Eli.

To start the first run play we see the Giants lined up with Brown at running back and Conner at fullback. Also, Brandon Myers is lined up in-line next to Pugh.

Right after the snap we see Mosley begin to pull over to the right side as Conner comes up to block the linebacker. 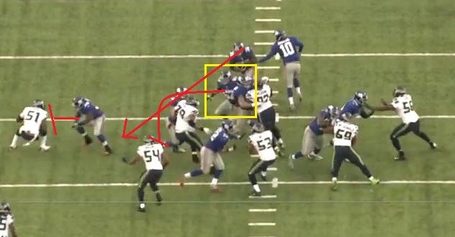 As the ball is handed off Mosley is about to come around Myers to make his block. I have no clue why Myers is being asked to block a defensive tackle.

In the last frame we see Mosley has completed his pull and is blocking the linebacker. Meanwhile, Myers' man has gotten away from him, and will make the tackle as Brown goes through the hole.

To start the second running play the Giants are once again in the shotgun with Hillis lined up beside Manning.

After the snap we see Mosley quickly getting up to the second level to block the middle linebacker. Diehl is pulling over from the right guard spot to block the right defensive tackle.

As a couple seconds pass we see Hillis running through the line of scrimmage while Mosley is up and preparing to block his man. Meanwhile Diehl and Myers are engaged and blocking. Beatty is hurrying up to block the outside linebacker. 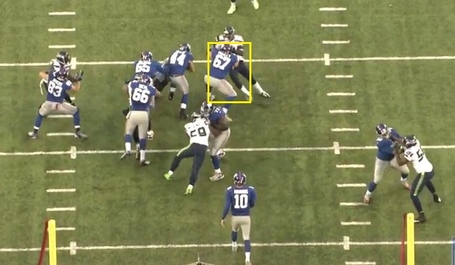 In the final frame we see that Beatty didn't get up to the second level in time to block the outside linebacker, who came crashing in to make the stop. It's tough to tell if Mosley has his man blocked up well enough that he couldn't make the stop had Beatty made his block.

Watching Mosley play in relief of Brewer, I can't help but wish he had gotten on the field sooner. He doesn't have Brewer's strength and sheer mass, however his quickness, agility, and general athleticism were on display as well as his nastiness. He was routinely finishing his blocks, and looking for somebody to block when he was unoccupied. That being said, it seems like Mosley plays a bit more under control than Brewer does.

There isn't enough of a sample size right now to adequately say what Mosley does well and what he does poorly, but he does seem to excel pulling and moving in space. He has a great natural bend and quick feet. I didn't really get to see if he has the ability to blow a defensive lineman back off the ball in the running game, though.

While Mosley certainly had a better game than Brewer (face mask penalty aside), Brewer shouldn't be dismissed out of hand. He is a powerful blocker, and he has the athleticism to recover if given a chance should he over-extend himself as in the first passing play. When he locks in on a defensive lineman, there isn't much they can do.

His biggest issue seems to be an over-aggressiveness. He is prone to biting on moves and over-running or over-extending himself. Also, his size is a bit of a detriment in and of itself. At 6-foot-6, 320-330 pounds, that is a LOT of momentum with a high center of gravity if he has to get out in space and misses (as in the screen pass).

That might stem from how long he had to wait to get on the field as a starter. But regardless of why he is so aggressive, if he can reign it in, an aggressive attitude is not a bad thing for a lineman to have.

Personally, I hope they both get a chance to start and see significant snaps the remainder of the season. I think the coaches really need to see more of both Mosley and Brewer going into an absolutely pivotal off season. Also, their individual strengths and weaknesses; Brewers' size and strength, and Mosley's athleticism, could play well off each other.