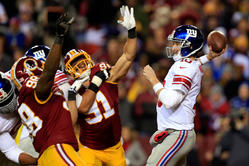 Complete coverage of Sunday's 24-17 victory by the Giants over the Washington Redskins.

Tuck, the defensive end who has listened for much of the past two years to people saying he was done, had a career-high four sacks Sunday night. He entered the game with only 2.5 for the season.

"Hopefully, after tonight people well believe that I can still play this game at a high level," Tuck said. "It (four sacks) is a big feat, obviously. The most important thing is we got a win. I played pretty good tonight. The guys are heckling me a little bit. But it's a good feeling.

"The secondary did a great job of mixing up the coverage and giving (Griffin) some different looks and he had to hold the ball in some situations and I was able to capitalize."

Without Jason Pierre-Paul, Tuck and Mathias Kiwanuka played every defensive snap. Rookie Damontre Moore played 17 snaps in pass-rush situations and did not get on the stat sheet at all.

The Redskins were, justifiably, angered after there was confusion about a first down that wasn't a first down on their final drive Sunday night. After a pass from Robert Griffin III to Pierre Garcon the chains moved and the down marker indicated first down. Only, it was actually still third-and-one.

Al Michaels: "They (officiating crew) couldn't have screwed this up anymore."

You can argue that the play ended up being inconsequential because Will Hill stripped Pierre Garcon of the ball to effectively end the game after the Redskins completed a pass to pick up the first down. Even Giants' fans, however, have to agree that this was an embarrassing screw-up by this officiating crew.

From the 'Great Minds Think Alike' Dept: I wrote Sunday night that there is no quit in the Giants. Ralph Vacchiano of the Daily News wrote essentially the same thing after the game.

The Giants built their defensive game plan around stopping Washington running back Alfred Morris. They held Morris, third in the league with 970 yards rushing entering the game, to 26 yards on 11 carries.

Hill made the game-clinching play with his strip of Garcon, and said it "felt awesome."