This is a four-part series where Invictus XI takes over as GM of the New York Giants and takes you through how he would aim to fix what's broken. Part II explores the status of several veterans on the team and makes some difficult decisions on who to say goodbye to. 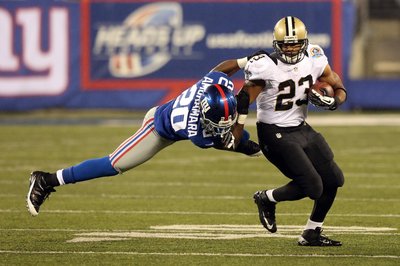 Well the first part of the series certainly made you feel warm and fuzzy, right? Sort of? That, New York Giants fans, is the current future of the team. Can argue about the talent all we want, but there certainly is a decent amount to work with.

The first piece in the series can be found here: Part I

This time, it won't be strawberries and cream. There will be (figurative) blood. Let's take a look at who remains under contract for 2014 and isn't a part of our young core:

Let's go over each individual case on its own merit:

Snee was put on injured reserve in 2013 due to hip injury. It was clear that during his age 31 season his body was failing him. He struggled early in 2011 before having a mild renaissance in 2012. However, as the injuries took their toll, he regressed immensely. Perhaps the easiest decision for me out of them all, Snee simply cannot be the highest-paid guard in the league. The dead money is there, but for a savings of $7.25 million, it must be done.

Baas is another interesting case. In his time with the Giants, he has been thoroughly mediocre. He was a strong run blocker, but his pass protection left much to be desired. His time here has also been marred by injury. The dead money on his contract this upcoming year is incredible, but there is more blood to be shed here. I'm going to cut him right here and right now. Why? Despite the minimal cap gain, Baas' presence is a philosophical block to those on the team that could potentially replace him. The $1.775 million saved this upcoming year could be used for his potential replacement. More on that later. In 2015, we will still be feeling the effects of his dead money hit, but $5+ million will still be cleared up instantly.

Brandon Myers was essentially on a one-year deal that he signed in 2013. If he proved to be a strong enough weapon, he'd be kept at essentially $4 million/year for three more years. While he has gradually improved his performance in 2013, nothing suggests to me that he is worth more than $4 million a year. The Giants can void Myers' contract after this season and only be responsible for his original signing bonus. We also have two players in the pipeline who are athletic monsters but are inexperienced in Adrien Robinson and Larry Donnell. They need to get that experience.

Rolle is in the middle of his best year as a professional athlete. He has looked quick, aggressive, and intelligent. He also matured into the leader and voice of the Giants. He finally became the major game-changer the Giants have envisioned him to be. He's certainly a keeper, right?

Well, it is not that simple. Cutting Rolle would save the Giants a significant amount of money. He's in a position that has Stevie Brown coming in next year, with Will Hill manning the other side, and Cooper Taylor as an intriguing talent. Rolle is also 31 years old, and as we've seen with other Giants like Justin Tuck, Corey Webster, Kareem McKenzie, and Chris Snee, you can go from an All-Pro season to terrible in a hurry.

I think I'd approach Rolle about a pay cut, but I doubt that will ever happen. I don't think I want to saddle myself with atwo- or three-year contract extension, even if the money was reasonably around $5 million a year. At that point, you are stuck with an aging Rolle at $6 or so million a year. Age is a HUGE sticking point for me. If he were 28 or 29, no contest I would approach him about an extension for the next three or four years. Players do get old, however, and with that come speed and athleticism issues. Rolle gets by on solid fundamentals and range, both of which will start to decay.

This would be, by far, the most difficult cut to make, but it's one where you put your faith in someone on the team stepping up to fill the leadership void and the players in the secondary to keep the strong play going.

Kiwanuka's situation is very much similar to that of Baas.. His career has been up and down. It's up for debate why that is the case, whether it be the constant switching from defensive end to linebacker, because of injury, or simply just because of talent. Nevertheless, Kiwanuka is making money. Lots of money. Like Baas, he has significant dead money next year. But also like Baas, I'm prepared to let him go because he provides a philosophical barrier to the development of someone else. In this case, Damontre Moore. Plus, that $1.8 million in cap savings could be used to bring back some old friends. Again, more on that later.

Jenkins has had a productive year as a member of the defensive tackle rotation. He provides consistent interior pressure and has had value as a rotational defensive end in heavy and 3-4 sets. His contract situation is manageable and I believe Reese did a good job in bringing him along for the price he got him for. I think for 2014, I'd consider keeping Jenkins and evaluate his performance. The $1.8 million saved by cutting him this year is not worth the impact he's got on the field. Re-evaluate him after the 2014 season, and we could choose to keep him, or gain $2.3 million in cap space for 2015.

Webster has had a rough couple of years. In 2011, he was playing at arguably a pro-bowl level. Then in 2012, his play fell off the face the planet. And now in 2013, he has struggled to even make it back on the field. He was placed on IR Monday. Webster is certain to get cut for this coming offseason, but could be a candidate to come back at the veteran's minimum if the Giants deem him healthy enough to contribute.

Oh boy. There's a reason I saved Eli Manning for last. Probably because he's the most intriguing situation of them all. There are Eli defenders and Eli attackers. I'm not going to get into all of that with this post, but I will say both have good points. Eli Manning is the greatest quarterback in New York football history (yes, that includes you, Namath), but that doesn't excuse his mediocre performance in 2012, and his downright awful performance in 2013.

Normally, I'm okay with one down year. It happens. But Eli hasn't looked quite right since the middle of 2012. Do I believe he has the fortitude and strength to get it turned around? Absolutely. Do I think he will? Now that's a more interesting question. I'm not sure. He has certainly regressed, and for that reason, I think a wait-and-see approach is much wiser.

Eli has recently said that he's willing to restructure his contract. No. That will never happen if I'm in charge. Does it help free up the expenses of the team for this year? Sure it does. It might help us get a solid player or two extra. However, my argument is that if Eli Manning is an elite quarterback, he doesn't need that extra solid player to succeed. I'm not willing to push down more money in the future to tie down his successor.

I'm not sure I extend Eli Manning this year either to bring in more money. You'll see at the end of this post how much cash is left to make moves after completing the above transactions. I don't want to be married to Eli Manning for four to five more years at this point. If Manning goes back to 2011 form next year, I'll certainly be willing to negotiate an extension for him for the 2015 season. If he continues his streak of mediocre to poor play, that $19.75 million in cap space looks awfully good, and chances are we'll be in good position to draft his successor. But for now, we watch ... and wait.

Now, let's look at how these moves have affected the 2014 and 2015 years, as we've added Cullen Jenkins and Eli Manning to our core group of players.

Those were some difficult, and some not so difficult decisions to make. If it were up to me, the team will look very different in 2014. I don't know if they will be able to survive these changes, but in order for the Giants to produce at the level of the champion again, they MUST distance themselves from those that are hindering them. It might take more than a year, but in this way, we see $38 million freed up to complete their roster and usher in a new era. We aren't done yet. We got all of our money, now it's time to spend it.

Next time: Evaluating free agents. Who do we welcome to this new team?