A look at the interceptions thrown Sunday by Eli Manning.

We haven't done a throw-by-throw breakdown of interceptions by New York Giants' quarterback Eli Manning in recent weeks. It is something we did regularly early in the season when Manning was seemingly throwing to the other guys as often as he was to his own team.

In the wake of Sunday's franchise record-tying five-interception debacle against the Seattle Seahawks we have to go back to that well one more time. So, here goes.

Let's take a closer look at four of the five interceptions. We will forget about the 'Hail Mary' because, well, it's a 'Hail Mary' and anything goes on those. It is really no big deal, or no big surprise, if they get picked off.

This is when things started to go south for Manning and the Giants on Sunday. We see Manning beginning to throw here with Victor Cruz (top right) one-on-one with Byron Maxwell.

Two things to note right away. Manning, with right guard David Diehl pushed back so that Diehl's left foot is almost on top of him, does not step into this throw. Also, you can see from where Cruz is in relation to Maxwell that this is going to have to be a back-shoulder throw to have a chance.

This one is a blurry image from NFL Game Pass, but what you see here is Cruz really put the brakes on anticipating that Manning will throw the ball short. Watch the accompanying GIF closely and you can this more clearly. 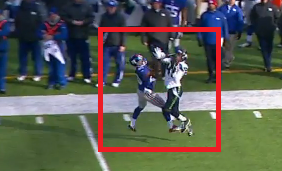 What we ultimately see at the end of the play is Maxwell making the interception on a ball that is clearly thrown in front of Cruz, leading him down the field, instead of to the back shoulder where the receiver was expecting it and where it needed to be.

In my original remarks about this I was critical of Cruz for not breaking this one up, as was FOX analyst John Lynch. In retrospect, Manning gave Cruz no chance. There was a play to be made here, but this is a badly-thrown ball. This one is clearly on Manning, with the caveat that we don't know how much not being able to step into this throw impacted it. 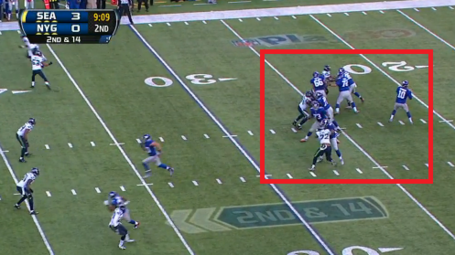 This is Manning as he readies to throw the pass that became his second interception. Do you see what I see? First and foremost, that is about as clean a pocket to throw from as any NFL quarterback will ever see. The Giants have six blockers to Seattle's four rushers, and Manning can sit comfortably. At the top left we can't see Hakeem Nicks locked up with Richard Sherman. When you watch the play full-speed you see that Nicks has one-on-one to the outside. He isn't open, but Manning decides to take a shot here. It is something we have seen him do hundreds of times.

Another blurry image, but with the ball in the air you can see Nicks has no separation. To have a chance, this throw is again going to have to be back shoulder, or it is going to have to be well to the outside, right on the out of bounds line. Think of the small window Manning fit a ball into when he hit Mario Manningham in the Super Bowl two years ago, and that is the kind of window Manning has. There is an opportunity here, but to succeed this throw has to be brilliant.

What Manning delivers is a ball thrown well to the inside, and with Sherman having had the inside position for the entire route putting the ball there is a recipe for disaster. FOX's Lynch again was critical of the receiver for not making a better play on this one. Yes, Nicks could have made a better effort at breaking this one up. Grab Sherman's arm, swat at the ball, push him, do something. Still, this is another awful throw by Manning where he gave Nicks zero chance to actually make a catch.

We move to the fourth interception of the game thrown by Manning. In our first screen capture we see that Manning has a clean pocket, a clear lane to see Nicks and throw into, and that Nicks has gotten inside position on Maxwell.

What we see here in our next screen capture is absolutely atrocious fundamentals from Manning. Still with a clean pocket, Manning bails out of this throw as if fearing that he will get hit. Look closely -- that is Manning's right foot, his back, plant foot, clearly in front of what should be his left lead leg as he is unnecessarily in 'get out of Dodge' mode and bailing out on this throw.

Manning's poor fundamentals on this throw, pulling himself to the left to get away from a pass rush that isn't there, lead to the ball being thrown behind Nicks and into perfect position for Maxwell to pull it away from him.

Notice all the space to Nicks' left. If that ball is out in front of him, where it should be, there is the potential for a catch-and-run here. Once again, a badly-thrown ball by Manning. 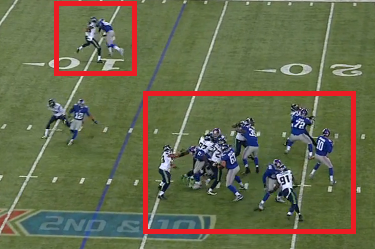 There is a common theme on these interceptions, at least the last three we have looked at. For all the pressure Manning has been under this season we see a clean pocket for him once again on this play. Manning is zeroed on Nicks, who has gotten outside position on Sherman as he heads to the end zone for the fade route.

Our second look at this play shows that Nicks has clearly beaten Sherman. He has a step, and he has outside position. All Manning needs to do is throw this ball outside and lead Nicks to the back pylon, keeping the ball out of Sherman's reach. We know what happens next.

Manning throws this ball too short -- not even to the back half of the end zone -- and too far to the inside. Nicks, as we can see, is forced to stop. This allows Sherman to catch up and tip the ball, with safety Earl Thomas coming over to make the interception.

Once again it looks as if Nicks didn't give maximum effort to make the play. This, though, is another awful throw from Manning -- probably five yards short of where it needed to be.

Related: Crossing to the Dark Side | More Kevin Gilbride debate | Fire Gilbride? Not if TC can help it

Kill offensive coordinator Kevin Gilbride all you want, and we did plenty of that on Monday. Each one of these plays had a chance to succeed, there's just no objective way to look at any of them and call them terrible play calls. The offensive line is only, marginally, a factor on the first interception. Ultimately, all four of these (and again we are discounting the throw-away 'Hail Mary') are poor throws by Manning. The throw to Cruz is to the wrong shoulder. The two outside throws to Nicks have to be thrown all the way to the outside, where if Nicks can't catch them they go out of bounds. On the crossing route to Nicks, Manning's fundamentals are terrible, resulting in an off-target throw and a turnover.

A great many things have gone wrong for the Giants on offense this season. Manning has been impacted by the poor offensive line, the issues at running back, spotty play at wide receiver and lack of production at tight end. These throws, however, make it apparent that Manning is a big part of the problem.