The Seahawks, Giants go in opposite directions after a shutout at MetLife Stadium

Week 15 featured its fair of dramatic finishes and upsets, and yet again there is a shakeup atop the Big Blue View Power Rankings.

The Seahawks proved to be the class of not only the NFC but the NFL, as they shutout the Giants at MetLife Stadium, fittingly retaking the No. 1 spot in the rankings. Likewise, the Giants continue to sputter down the ladder with a pathetic outing at home. 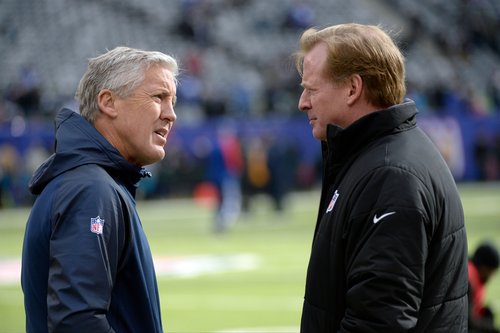 SB Nation also puts the Giants at No. 24.

The Broncos lost Thursday night to the Chargers; the Patriots lost to the Dolphins and the Bengals fell to the Pittsburgh, leaving plenty of uncertainty surrounding the AFC elite.

Here are the Big Blue View Power Rankings for Week 16:

2. Denver Broncos (11-3): While on most days Denver looks to be unbeatable, losses like this one to San Diego that makes you question whether they'll make it to the AFC Championship Game. (LW: 1)

3. San Francisco 49ers (10-4): Winners of four in a row, including a divisional game against Seattle, the Niners are catching steam at just the right time. (LW: 6)

6. New England Patriots (10-4): It's not easy to replace a player like Rob Gronkowski on offense, and I'm not sure the Patriots will be able to overcome this loss (LW: 3)

7. Cincinnati Bengals (9-5): On track to be the AFC North champs, Cincinnati has to prove they can be divisional foes on a consistent basis. (LW: 5)

8. Kansas City Chiefs (11-3): The Chiefs have averaged more than 50 points over their past two games, but then again, they've played Washington and Oakland. (LW: 8)

9. Arizona Cardinals (9-5): Can Arizona make a major statement by challenging the Seahawks up at CenturyLink Field? (LW: 11)

25. Minnesota Vikings (4-9-1): Over the past three weeks, Minnesota is 2-1 with wins over contenders Chicago and and Philadelphia, and a three-point loss to Baltimore. Not too shabby. (LW: 29)

29. Atlanta Falcons (4-10): Aside from Matt Ryan and Julio Jones, which Falcons players are surefire bets to be on the team next year? (LW: 30)

31. Washington Redskins (3-11): Even though the Texans have a worse record, it's hard to argue any team is in the worse shape than the Redskins. (LW: 31)