Share All sharing options for: NFL Picks Week 15: Game-by-game predictions against the spread

Last week was a weird week because of all of the crazy weather that occurred and it is reflected (or used as an excuse) for a poor week where I went 5-10 (I missed the 49ers/Seahawks game) and it was my first big losing week since I started the season 3-10 and 16-31-1 over the first few weeks.

Here are this week's picks.

Maybe it's the beat down the Chargers just gave the Giants, but I don't think they are a terrible team and they shouldn't be 10-point underdogs in a divisional game. However, with Peyton Manning and Julius Thomas on my fantasy team I hope I'm wrong and the Broncos score a ton of touchdowns.

RG3 is shut down, which makes this a weird game for me. I liked the Falcons more with RG3 playing then Kirk Cousins, just because I have seen the dysfunction the team has with RG3 and the coach right now, but who knows how inspired or uninspired the team will play with Kirk Cousins. I do know, though, that the Falcons cannot stop the run and Alfred Morris should have a big day. 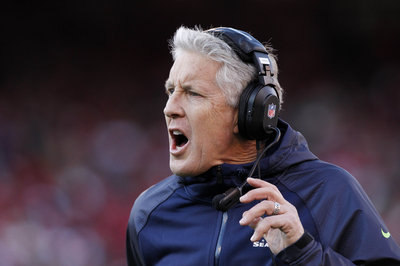 Everything you need to know about Giants-Seahawks.

I don't have a great feel for this game, but I do think it'll be pretty high-scoring and the Bears offense is just better.

Another weird game where you don't know how a team will respond to having a different head coach. The Texans have lost 11 straight games (two of them to Jacksonville) yet entered last week as the No. 1 team in the league on defense. Weird team to figure out. I say the Texans play better with Wade Phillips then they did with Gary Kubiak and keep the game within 7 points.

The Bills seem to be getting worse by the week. I'm not sure if the long season is getting to their young impact players or what's going on, but the Jaguars are getting better while the Bills seem to be regressing. I'll take the hot team over the team I think is actually more talented.

If you're a Patriots fan you have perhaps the best roller coaster ride in the league to watch with all of their crazy comebacks -- last week's win against Cleveland was unreal. This week I think they play better all game and win by more than three to a Dolphins team that has actually won three of their last four games despite the Richie Icongnito-Jonathan Martin scandal.

The Eagles have the longest win streak in the NFL right now at five games. They also have the league's best winning percentage on the road (along with the Chiefs), and they also might get to play this game without facing Adrian Peterson. I think the Eagles win by more than five points here.

The Seahawks will score at least 7 points and I could honestly see the Giants getting shut out here. The Seahawks are dominant against the pass and average against the rush (111 yards per game allowed which is 14th most). The Giants are below average at both.

Tampa Bay's beat down of the Bills last week was the most surprising result of the week for me, and despite the Buccaneers being 4-1 in their last five games I don't think they'll stay within five points of the 49ers in this game.

Every game with the Jets feels like a coin flip in terms of whether or not they'll cover the spread. Their defense is good enough to keep them in every game, and the game result usually depends on what part of the field and how often Geno Smith turns the ball over.

I think this line should be higher and this is an easy pick for me.

The Saints aren't as good on the road, but they are going to get to play in a dome which should help. I am hoping that the Rams defense shows up and makes life difficult for Drew Brees because my opponent in the fantasy football playoffs has Brees, but I don't think they will.

The Titans have a solid team, but they need a franchise quarterback. Ryan Fitzpatrick is a turnover waiting to happen and the Cardinals are a team that causes problems for offense, despite Carson Palmer's 17 interceptions this year the Cardinals have a zero turnover differential. I think they go out to Tennessee and keep their playoff hopes alive while essentially ending the Titans' season.

No Line (Until Rodgers is declared in or out)

I don't know why but I like the Steelers to win this game. Even though they are only 5-8 they are still 2-2 in the division and 3-3 at home.

Seven points seems like a lot for a team that is playing the defending Super Bowl champions, especially when the teams have identical records.