There's a lot of pain to go around after the 37-14 bloodbath that San Diego laid on New York. There's no respite here as we dive into a Pro Football Focus review of the player performances this week.

The New York Giants season flat-lined on Sunday with an atrocious showing in sunny San Diego against the 5-7 Chargers. Phillip Rivers cut through the Giant defense like warm butter, while the offense sputtered like the little engine that couldn't.

The Pro Football Focus guys had little sympathy for our Giants this week. Let's get into the carnage. 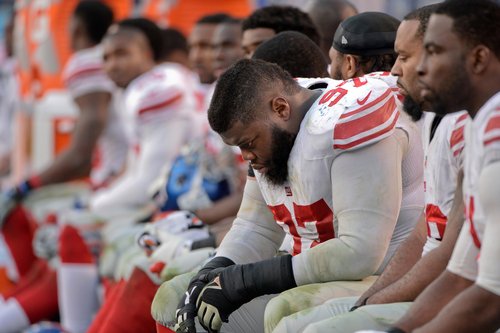 Nobody Nada. Zip. Zippo. That's right. No offensive player had the right to be called an "MVP" this week. Not a single score at +1.0. I have no problem with this. Nobody stood out as particularly helpful in what can only be described as a pathetic offensive showing. The Giants have some real issues on this front, and at every position.

Breaking away from the normal "Key Offensive Contributors" portion of this post since nobody broke +1.0, there were a few Giants worthy of mentioning as guys that simply did not mess up.

The Giants offensive tackles Will Beatty and Justin Pugh both scored +0.9 and were not the problem in this game. Beatty gave up a sack, but that was his only pressure given up for the game. Pugh gave up three hurries and one hit in a decent showing at right tackle.

Hakeem Nicks also scored +0.9 for the quietest five-catch, 135-yard performance that I have ever seen. Still, he made a few really nice grabs. My favorite factoid to throw around: the last time Nicks scored a touchdown was Dec. 9, 2012. The San Diego Charger game was on December 8th, 2013. Still no touchdowns.

James Brewer (-4.7) Brewer ends up with one of the worst grades that an offensive lineman can get in a game. He was abused in pass protection, allowing a sack, two hits, and a hurry. The fact that both Beatty and Pugh gave up less pressure than him at guard speaks volumes about the level of play in the interior. PFF also dinged him for some poor run blocking, though I didn't see too many issues from him on that front.

Eli Manning (-3.9) Another value with which I must sadly agree. Manning had one of his worst outings of the year as he upped his interception counter to 20. He also lucked out of two more interceptions due to drops by the Charger defense. PFF cited poor decision making, inaccurate throws (like throwing to Randle's back shoulder on a crossing route for his interception), and forcing passes. The one positive was his deep throw accuracy, where he completed 3 out of 4 passes for 122 yards on pass attempts longer than 20 yards.

Will Hill (+3.0) If there's only one thing that Giants' fans can take away from a lost season, it's this: Will Hill is a beast in every sense of the word. This is why the Giants were so supportive of his mistake-ridden past and why fans are so concerned about him messing up. He makes a huge difference. Pro Football Focus' fourth-overall ranked safety has never had a game where he's ranked below -0.6, and this was no different. Credited with +1.4 in run defense and a +1.6 in pass coverage, he has made me forget all about Kenny Phillips. He was targeted twice, but gave up zero catches. He also had a bone-shattering hit early in the game for a defensive stop.

Linval Joseph (+2.0) Joseph makes an appearance after four non-descript weeks by notching his third-highest grade of the year. He was given strong grades for his run defense, notching 4 defensive stops is among the top of the defensive tackle list this week. He has a cumulative +9.0 for the season as he remains a steady, if unspectacular player as the spearhead of the defensive tackle rotation.

Antrel Rolle (+1.9) I'll keep saying it until I'm blue in the face, outside of Seattle, I don't think there's a more impressive safety duo in the NFC and possibly the league. This is the sixth time in seven weeks that Rolle has graded well into the positives as Terrell Thomas and Trumaine McBride have stepped up to allow him to fulfill his true free safety rover position. Once again, he was decent in pass coverage, but outstanding in run defense, creating five stops -- which was the most on the team.

Justin Tuck (+1.7) I'd say Tuck, Rolle, and Hill are now the usual suspects that occupy this part of the post. The defensive captain has now graded positively in 10 out of 13 games this season, as he notched two sacks, a FF, a hit and a hurry to go along with four more defensive stops. This was his second-highest pass rush grade of the season at +1.5.

Jayron Hosley (+1.4) Interesting to note that Hosley garnered a +1.4 in only 26 snaps, which is very, very impressive. He took over after Trumaine McBride was benched in the second half for an unknown reason. He's proving to be a rising player in his second year after getting a few games under his belt, and one has to question whether he can stay healthy enough to continue his rise towards reliabilty. His next few games will be very important.

Keith Rivers (+1.3) Rivers was the only Giant linebacker to make a positive grade this week. He was a strong force against the run, notching the 3rd highest grade on the team in run defense. He made two stops and limited the damage that Ryan Mathews did on his side.

Terrell Thomas (-4.1) No, not Mathias Kiwanuka, though he did not stray too far from his usual dwelling. Thomas deserves this dishonor, as he was abused by Antonio Gates and Keenan Allen. How bad was it? Pro Football Focus has Thomas targeted six times. Of those six targets, he allowed all six to be caught for 86 yards and a TD, giving Rivers a perfect 158.3 passer rating throwing at him. Yeah, that's pretty darn bad.

Spencer Paysinger (-2.7) One week after making the "Key Defensive Contributor" list, Paysinger finds himself as a villian, scoring well into the negatives in both run defense and pass coverage. Not a banner day for the linebacking corps as the Chargers' receivers, backs, and tight ends found the intermediate lanes clear all day.

Mathias Kiwanuka (-2.7) No matter how hard he tries, the poor guy just can't get away from a bad game. Aside from that stupid personal foul call, Kiwanuka managed only ONE QB pressure in 26 pass-rushing attempts. Damontre Moore matched that output in only nine pass rushes.

Jacquian Williams (-2.2) Williams didn't have a terrible day in coverage, but was dreadful in run defense, earning a -1.9 grade which was worst on the team. It's clear he has a lingering deficit in this area, as this is his sixth straight week grading negatively against the run.

Jon Beason (-2.0) Beason is essentially the total opposite of Williams. He graded out positively against the run and was an impact there, but managed a horrendous -3.0 pass coverage grade. Once again, Antonio Gates was the recipient of the generosity.

Damontre Moore (-1.2) Moore only played 15 snaps but still managed this grade. He didn't do anything wrong according to PFF against the run (0.0) and wasn't terrible pass rushing (-0.3), but he had an offsides call that was a big momentum shifter, and that is the biggest result of his grade.

Nobody performed poorly or well on special teams this week.

Victor Cruz is in the top 10 in "Yards Per Route Run" from the slot. He also has the second-lowest drop rate from the slot, which shows how reliable he has been this year.

"Pass Blocking Efficiency" is essentially the percentage of sacks, hits, and hurries from total quarterback passing snaps. Where does the Giants offensive line rank? You guessed it, dead last. Eli once again is the most hurried QB in the NFL.