The Giants travel to FedEx Field in Landover, Md. to face the Washington Redskins Sunday night. Will they return to New Jersey with a victory?

The NFL loves to send out press releases bragging about the television ratings for its national broadcasts. It's hard to blame the league for that since nationally-televised NFL games always dominate the weekly ratings. You wonder if Sunday night's New York Giants-Washington Redskins game will threaten to upset the NFL's usual television dominance.

The meeting between the 4-7 Giants and 3-8 Redskins is the type of game the 'flex scheduling' agreement between NBC and the NFL was made for. Get games between also-rans out of the marquee Sunday Night Football slot and put a more meaningful game in that slot. NBC chose to gamble with Giants-Redskins, however, and now the network is stuck with a game between two teams that have big TV markets, and had big aspirations for 2013, but have both been big flops. 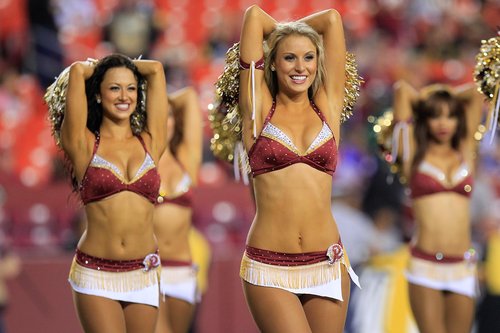 You don't care about NBC's problems, however. You are a Giants' fan and all you care about -- well, all you should care about -- is whether or not the Giants are going to win Sunday night. I know there are those out there who call themselves "fans" while wanting their team to tank for a higher draft pick. That isn't, however, how this works. As a certain coach turned broadcaster famously said "you play to win the game."

So, will the Giants win the game Sunday night against the Redskins? I think they will.

Both of these teams deserve their losing records. Neither one of them is very good. The Giants are still -11 on the season in takeaway/giveaway ratio, and their giveaways have an amazing tendency to turn into seven points for the bad guys. The Giants don't block very well, they only run the ball well sometimes and when Eli Manning throws it you hold your breath because you are never sure what's going to happen. The Redskins can run it, but they can't throw it. If you listen to all the media reports you would think Washington is using a one-legged guy everybody hates at quarterback. Neither team can do much right on special teams.

'If there was such a thing as a 'Hot Mess Index' the Redskins' temperature would be a lot hotter than the Giants.'

Somebody, however, has to win. Unless, of course, the Giants and Redskins go all Minnesota Vikings and Green Bay Packers, torturing their late-night national TV audience -- and writers who have to stay up and recap the carnage -- with an overtime tie.

So, why do I think the Giants will win? Let's just say that if there was such a thing as a 'Hot Mess Index' the Redskins' temperature would be a lot hotter than the Giants.

Washington has all the distraction of the RGIII talk swirling around, and more. Should Griffin be playing? Should he be sitting out? Does he get along with head coach Mike Shanahan? Do RGIII's teammates even like him? Will Shanahan be fired at the end of the season? Will the Redskins continue to be called the Redskins?

Everywhere you look with the Redskins there are brush fires to put out.

With the Giants? Even with a four-game winning streak mixed in, there has been way too much bad football. What there hasn't been is a ton of controversy or distraction. Sure, Terrell Thomas probably shouldn't have guaranteed a victory over the Dallas Cowboys. There is also Hakeem Nicks' pending free agency. If that's the worst you can muster up for controversy around the Giants, however, then that's pretty good.

Credit head coach Tom Coughlin and the rock-solid Giants' organization for keeping this team together, for not allowing finger-pointing to start, for keeping the focus on winning and losing. The Giants haven't played much good football in 2013, but at least their season is still focused on the football. That is far from the case in Washington.

That is why I believe the Giants go into FedEx Field Sunday night and come away with a victory.