The entire nation will be subjected to the 4-7 Giants facing the 3-8 Redskins on Sunday Night Football. Here is how to watch the game, the TV channel, radio and online streaming information, odds, the schedule, game time, announcers, injuries and more.

Really? NBC and the NFL are going to make New York Giants and Washington Redskins's fans wait until 8:30 p.m. ET to watch the 4-7 Giants face the 3-8 Washington Redskins? If you hate that thought just think of how the national Sunday Night Football audience feels about being subjected to this game between NFC East also-rans.

A year ago, Giants-Redskins was electric with the two teams fighting it out for a division title -- which Washington won. This season? From the perspective of a national audience? Eewwwwwww! 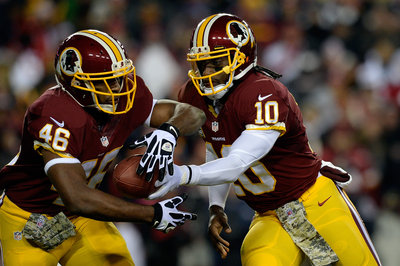 Only New York Jets rookie Geno Smith (18) has thrown more interceptions than the 17 tossed by Eli Manning of the Giants. Manning has only 14 TDs, a 56.9 percent completion percentage and a passer rating of 72.5.

Robert Griffin III of Washington, the subject of much conversation, has 11 INTs, only 5 TD passes, a completion percentage of 59.8 and a passer rating of 81.8.

Neither of these teams is likely to be able to make a playoff run. Perhaps one of them can salvage some respect with a few victories down the stretch. Sunday night we see which team gets a head start down that path.

Odds: The Giants are one-point favorites.