Backup no more: Trumaine McBride 'a starter for us,' says Giants' Fewell

Share All sharing options for: Backup no more: Trumaine McBride 'a starter for us,' says Giants' Fewell

Trumaine McBride has been one of the pleasant surprises for the New York Giants this season. The 28-year-old has been so good, in fact, since stepping at left cornerback that defensive coordinator Perry said Thursday the job now belongs to him.

"I consider him a starter. He's started, what, two, three, four ball games for us?" Fewell said. "It’s his job to lose."

That, of course, means that barring injury or a backslide in performance the Corey Webster era as  the Giants' left cornerback is over. It has been quite a climb for McBride, a six-year veteran who was out of football last season. A seventh-round pick by the Chicago Bears in 2007, McBride spent three years in Chicago and one each with the Arizona Cardinals and Jacksonville Jaguars. He was cut by the Jaguars before the 2012 season and did not hook on anywhere. The Giants signed him to a futures contract in January.

McBride barely made the 53-man roster, edging out Charles James for the final cornerback spot. He got his chance to play only due to injuries to Corey Webster, Aaron Ross and Jayron Hosley.

Fewell admitted Thursday the Giants weren't sure about the 5-foot-9, 185-pound McBride.

"In camp and in the OTAs he was impressive and then you saw some things and you don’t know if he can, you don’t know if he can’t, but he competed every day. The thing that you liked about him is he competed every day," Fewell said. "When he matched up against DeSean Jackson in the Philly game really well and really he had a good game against Kansas City when he came in and played and I think he contested and knocked down two or three or four balls, and in my mind, I said this is a thumbs up and so I haven’t looked back since."

McBride has started three of the past four games. He will start again Sunday vs. the Oakland Raiders provided a groin injury that kept him out of practice Thursday is not severe. 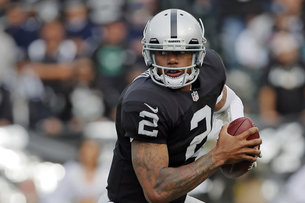 Prior to this season McBride had only 10 professional starts, and had not started a game since 2008. He started nine games as a rookie in 2007.

This season, McBride's passer rating against of 65.5 is the best on the Giants and places him 16th in the league among corners who have played at least 25 percent of their team's defensive snaps. He has allowed only 12 completions in 26 targets, a 46.2 percent completion rate that is eighth-best among NFL corners.

Giunta admitted that McBride has been "a great surprise" for the Giants.

"He does a great job getting up and pressing guys. It fits his skill set and he’s able to go up and match their quickness. He’s a little undersized but he competes, he’s a great competitor, he has good ball skills, especially with the ball in front of him. So he’s been a great surprise for us this year," Giunta said. "He is a guy with very, very good coverage skills. In our system he fits because we do play a lot of man-to-man coverage. That’s perfect for us."