Jesse picks the Week 10 NFL games against the spread.

Share All sharing options for: NFL Picks Week 10: Game-by-game predictions against the spread

Not a great week last week, but solid. I went 7-6 on the week, but 1-4 on my 5 best bets of the week. Yeesh! This week the Giants will take on a Raiders team that was just embarrassed by the Eagles and Nick Foles' seven-touchdown performance. Let's see if I can keep it going -- I'm now 45-36-2 since Week 4.

This one might be more about hope than actual belief, but the Vikings are playing better and I never know what to expect on these Thursday night games. The Vikings are a lot more banged up than the Redskins, though (Kyle Rudolph and Phil Loadholt are out). Pick: Vikings

Nope, not doing it. I'm not falling for it again Falcons. I pick them every week and they are terrible every week. Pick: Seahawks 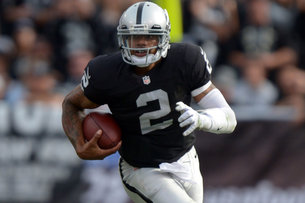 I hate trusting the Bengals because they like to disappoint, but they are the better team and if they ever want to be serious they need to win this game. As an aside note in fantasy I'm going up against Andy Dalton and A.J. Green so a Ravens shutout wouldn't bother me. Pick: Bengals

No Jay Cutler makes this a difficult task against a talented Lions team. Pick: Lions

I think Seneca Wallace will look much better than he did last week and I still don't think the Eagles are all that. Expect a big day from Eddie Lacy and for the Packers defense to make Foles look average and not like Joe Montana's better brother. Pick: Packers

The Rams are no good, but I don't think they are that terrible. Pick: Rams

The Raiders are better than they looked against the Eagles and while I think the Giants win this game (Oakland has to travel East for a 1 p.m. ET game) I can see them keeping it within 9 points. I'm not sure the Giants are 9 points better than anyone. The Giants have a -10 point differential right now, which is terrible. This line is also -7 in a few places but I think the Raiders can cover that as well. Pick: Raiders

The Jaguars are historically bad, but the Titans are no offensive juggernaut, will the Jaguars keep it within 12? Probably not, but I'll roll the dice here. Pick: Jaguars

Panthers have a good defense and can make some plays on offense. I think they keep it within 7 points here. Pick: Panthers

The team looked inspired with Case Keenum starting and Carson Palmer is the only quarterback within striking distance of surpassing Eli Manning as the league leader in interceptions with 14 INT to Eli Manning's 15. Pick: Texans

The Chargers are pretty steady and this is a division match-up. Philip Rivers should be able to put up enough points against a porous Denver secondary to keep the game close. PIck: Chargers

I"m picking against the NFC East in all four games this week. Pick: Saints

This game is the game of the week. If game of the week meant "soap opera of the week". As the World Turns was written about these two teams. We have the Buccaneers crazy coach, staph infections abound, Darrelle Revis talking about money being more important than winning. The Dolphins have the whole Incognito issue going around.  The state of Florida is so crazy it has infected their sports teams. With all that being said, I'll take the Dolphins to squeak one out against the Buccaneers. Pick: Dolphins