The Eagles, Cowboys and Redskins all move up in the rankings after wins.

Another week and another win for the Chiefs, who now sit at 9-0 entering their bye week. Finally, the lone undefeated team in the league will be tested when Week 11 rolls around and they face the Broncos. A win against Peyton Manning could help Kansas City finally take the top spot in Big Blue View's power rankings.

In the NFC East, Dallas, Washington and Philadelphia all won while the Giants sat idly. The division race remains wide open, as no team has showed it is capable of distancing itself in nine weeks of football. 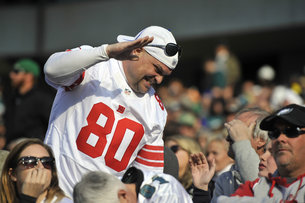 From 0-6 to the playoffs? Unlikely, but possible.

Here are the Big Blue View Power Rankings for Week 10:

1. Denver Broncos (7-1): A week off gives Peyton Manning more time to prepare for the next few games, ones that a division title may hang on. For almost any other team, the loss of John Fox may have greater ramifications, but Manning is a coach on the field so Denver will be OK. (LW: 1)

2. Seattle Seahawks (8-1): The Seahawks never lose at home, but the winless Bucs put that test to theory on Sunday. Seattle passed, but it's the second straight week the team has looked beatable. (LW: 2)

3. Kansas City Chiefs (9-0): Welcome to the Top 3, Kansas City, as the undefeated Chiefs stayed strong on the road against an underrated Bills D. We're all anxious to see this defense line up vs. Manning. (LW: 4)

4. Indianapolis Colts (6-2): Andrew Luck has the clutch gene, evident against Sunday night against the Texans. No Reggie Wayne, no problem. (LW: 5)

5. New Orleans Saints (6-2): The Saints offense sputtered against a very stingy Jets defense. Injuries are piling up, but when healthy this team will be just fine. (LW: 3)

7. New England Patriots (7-2): Pinch me, or did we just see the Patriots team we have been waiting for all season? If the offense clicks like that, the AFC race just heated up. (LW: 9)

9. Cincinnati Bengals (6-3): The Bengals have shown they can beat the best teams in the league, just not on a consistent basis. Can this defense play as well without Geno Atkins in the middle? (LW: 7)

15. Tennessee Titans (4-4): This team can beat the bad teams but struggles against true contenders. (LW: 16)

17. Baltimore Ravens (3-5): The defending champs have some major issues they failed to address during their bye week. (LW: 15)

20. Buffalo Bills (3-6): The record doesn't indicate how well the Bills are playing. However, they haven't been on the winning end too many times. (LW: 18)

21. Houston Texans (2-6): Out of contention, the Texans could be a real spoiler down the stretch if Case Keenum plays as well as he did vs. Indy. (LW: 22)

24. Cleveland Browns (4-5): Jason Campbell is the first Browns quarterback to lead the team past Baltimore in 11 tries. But is it a Cleveland win as much as a Baltimore loss? (LW: 25)

28. Atlanta Falcons (2-7): It's puzzling how bad Atlanta has become just a year shy of being in the NFC Championship game. (LW: 26)