A look at what happened when Antrel Rolle was moved to slot cornerback for the Cowboys' final drive.

A streaking New York Giants' season is on the line. Eli Manning completes a pass to wide receiver Louis Murphy Jr. on a broken play for a touchdown to tie the game (with the help of a two-point conversion). The Dallas Cowboys get the ball back with 4:45 left in the game on their 20-yard line.

We've all seen this movie before. Somebody steps up and makes a big play. Giants win, and the magic continues.

Unfortunately, it didn't work out like that this time around. Somebody decided to put on the version with the alternate ending while we weren't looking ...

During Dallas' first possession of the quarter, Trumaine McBride, one of the Giants' two starting cornerbacks, aggravated a groin injury and was out for the remainder of the game. This left the Giants with the options of fielding second-year player Jayron Hosley or safety Antrel Rolle as the nickel corner.

The Giants ultimately decided to move Rolle down from the safety position he had been manning admirably for the previous five games to match up on the slot receiver. While defensive coordinator Perry Fewell may have felt that Rolle presented their best option, it's an interesting choice. Cornerbacks, and slot corners in particular, are as a rule more fleet of foot and fluid of hip than the 30-year-old safety.

We all know the outcome. Rolle was targeted for three pass plays that may have sealed the Giants' season. But was Rolle at fault? As this is the Film Room, let's see what the eye in the sky has to say. 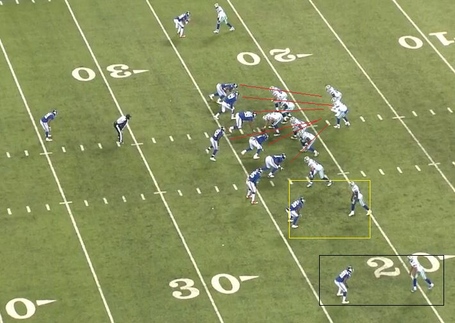 Here we see the Giants with fourdown linemen, showing linebacker blitzes from the A and B gaps. At the bottom of the screen we have Prince Amukamara in coverage of Miles Austin. An in the yellow box we see Antrel Rolle in (press) man coverage of Dez Bryant in the slot.

As we watch the play unfold, Rolle gets a nice jam on Bryant, which should upset the timing of the route enough to force Romo to look elsewhere or cause an incomplete pass. However, Austin runs a short slant route with Amukamara in coverage. He aims the route to go between Bryant and Rolle. This forces separation for Dez, and ultimately allows him to come back for the back-shoulder throw. Rolle doesn't actually do much wrong here, and is almost able to get a hand on the ball to break it up.

This play actually should look familiar to Giants' fans. It is very similar to the play that got Victor Cruz his first NFL touchdown against the Eagles in 2011.

While the completion is credited to (or against) Rolle, an argument can be made that credit rightfully goes to the Cowboys for play design and execution. 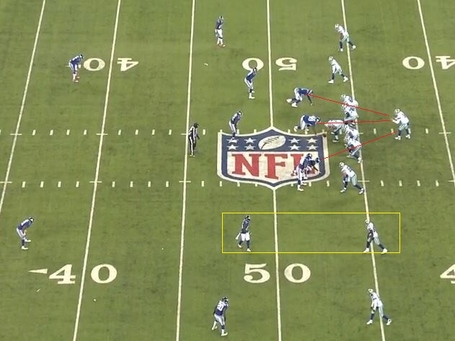 In this play we see the Giants in a three-down set. Rolle is once again lined up in the slot against Bryant. This time, however, he is in off-man coverage rather than in press-man.

This time around we see Rolle giving roughly a five-yard cushion to Bryant. Bryant does a good job of cutting sharply to the middle of the field at the first-down marker. Rolle recognizes the play, but can't transition out of his backpedal (which, from a technical perspective is entirely too high, slow, and choppy for a cornerback. Which is understandable, given that he's a safety. It just bears noting) and close quickly enough to break up the pass.

This play was likely called because of the cushion Rolle was giving up to the Cowboys' best and most athletic receiver. While there's no way of knowing whether or not more physical coverage would have prevented the firstdown, it likely would have made it more difficult than this easy pitch and catch over the middle. 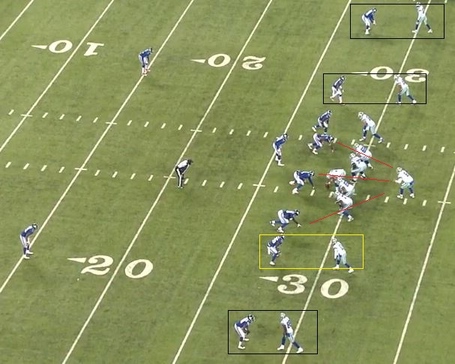 In the final play we see the Giants once again in a three-down set, with man coverage across the board. Rolle is in off-man coverage with the rookie slot receiver Cole Beasley.

This is just painful to watch. Rolle lets Beasley eat up the cushion, and only half-heartedly challenges him (granted, more physical play probably would have been flagged as pass interference). Following that, Rolle plays off Beasley, giving him a lot of room. Beasley makes a move back towards the line of scrimmage and Rolle tries to cut to follow suit. However, his feet go out from under him and Rolle falls while Beasley catches the ball and turns back upfield. And to make the play complete, while he's getting up, Rolle trips Beason.

It would appear that prior to falling Rolle drifts back towards the middle of the field, perhaps expecting some safety help from Ryan Mundy. Regardless, Rolle pretty much takes himself out of the play, even before it looks as if he gets shot in the back and falls down.

The purpose of this was only going to be to look at how the Cowboys exploited Rolle to end the game. However, there was another option on the table for the Giants in Jayron Hosley. I thought it would be interesting to take a look at him and how he performed in his limited opportunity after McBride went down. 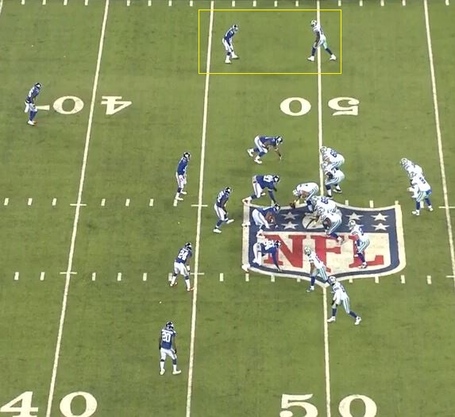 Here we see the Giants line up in a 4-2-5 set with Terrell Thomas as the nickel corner. Hosley is matched up in off-man coverage on Bryant at the top of the screen. 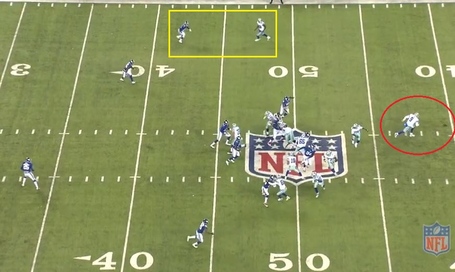 The snap from the Cowboys' rookie center sails over Romo's head. With at least one eye in the backfield, Hosley sees this and starts breaking back towards the line of scrimmage. 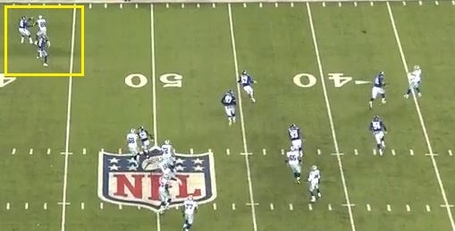 In the next pic, we see that Romo has recovered the ball and its on its way towards the sideline. Hosley has closed up on Bryant, who has turned up field to try to make the catch for the first down. Will Hill is underneath the route. That allows Hosley to be on top of the route and use his body to force Bryant to take a more severe angle to the sideline than he would have liked. 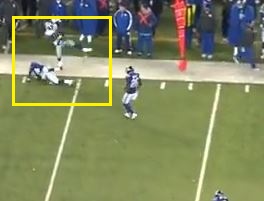 In the final image we see Bryant well out of bounds trying to make the catch. Hosely is on the ground, but his positioning kept Bryant from being able to extend and try to catch the ball while tapping his toes inbound.

This is an incredibly limited sample size. It's one play, and a broken play at that. However, Hosely does a decent job matched up on one of the more dangerous receivers in the league. He doesn't allow himself to get out-muscled (a problem against the Cowboys in 2012). He trusts his safety help and uses his athleticism to influence Bryant's route.

Well, there you have it. It's indisputable that the Cowboys targeted Rolle on the final drive and came way with three plays that may have doomed the Giants' season. Was Rolle at fault in each of those plays? Maybe not on the first one. However he certainly lacked the quickness and fluidity to perform the coverages asked of him on the second and third completions. That begs the question of whether the blame lies at Rolle's feet or whether defensive coordinator Perry Fewell put the correct players in the correct positions to win. But that's a question for another time. This is just the film room.