A first overview of Sunday's matchup between the New York Giants and Washington Redskins.

When the 2013 NFL schedule came out, two matchups between the New York Giants and Washington Redskins over the season's final five weeks looked like they would be critical late-season NFC East contests. Instead, Sunday's first meeting between the two teams turns out to be a meeting between two going nowhere teams who are playing out disappointing seasons.

This is the kind of game that NBC and the NFL created flex scheduling for -- to make sure that the best possible game for a national audience was televised on Sunday Night Football. For whatever reason, however, Giants-Redskins will still be this weeks' Sunday night contest. The network bypassed flip-flopping Giants-Redskins with Sunday's Kansas City Chiefs-Denver Broncos matchup. 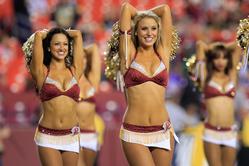 All your coverage leading up to Sunday's game.

You could say the game between the 4-7 Giants and 3-8 Redskins is critical. The Giants are clinging to the slim hope that five straight season-ending wins, as unlikely as that is, would give them a chance to win the division. More likely, these two contests between New York and Washington will determine something else -- which teams stays out of the NFC East basement.

The Giants open the week as slight favorites, and promise to keep fighting regardless of the circumstances.

"Things are not gonna work out in your favor all the time. That doesn't mean that you hang your head low. You gotta go out there, and you get better. You play football, you play with pride," said Giants' safety Antrel Rolle.

The Redskins? Well, according to most of the coverage coming from the nation's capital they seem to be doing most of their fighting internally.

The parallels between the two teams are interesting, and we will try to draw some of them out in greater detail thoughout the week. Both teams have under-achieved this season. Both have star quarterbacks, the Giants with Eli Manning and the Redskins with Robert Griffin III, who have not played up to expectations. Both have veteran, Super Bowl-winning coaches.

We'll see how the week, and the rest of the season, plays out. Keep it here for all your Giants' coverage. Check out Hogs Haven to keep up with the latest on RGIII and Co.