Five things I think I think about the Giants, Week 13: Goodbye, Hakeem edition

Hakeem Nicks appears almost certain to leave as a free agent. That is among this week's 'Things I think I think' about the New York Giants.

Share All sharing options for: Five things I think I think about the Giants, Week 13: Goodbye, Hakeem edition

We have to lead this week's installment of 'Five Things I Think I Think' about the New York Giants by talking about wide receiver Hakeem Nicks. The fact that Nicks did not play Sunday, and the obvious disconnect that exists between Nicks and the Giants organization, makes me believe this -- I think Nicks has almost certainly played his last meaningful football for the Giants.

Sure, Nicks will play again this season. The Giants, though, are done playing meaningful football in 2013. And when the season is over, Nicks is gone. I will  be stunned if the free-agent-to-be wide receiver returns to the Giants in 2014.

Wednesday -- Skips practice at the behest of his agent to have a mystery injury no one knew he had examined.

Thursday -- Back to practice on a limited basis, says "everything was fine" in his examination. Leaves no indication it's remotely possible he would miss Sunday's game, saying "it's Dallas, man."

Friday -- Listed as questionable for Sunday, but considering what Nicks said Thursday that is considered a formality. No real indication he would miss Sunday's game is given.

Sunday morning -- Word begins to circulate that Nicks would test his injury during warmups and would be a game-time decision.

Sunday afternoon -- Warmups begin and there is no sign of Nicks, who never even takes the field. He is listed as inactive 90 minutes before kickoff.

Truth is, I haven't been convinced that Nicks was "All In" to help the Giants since well before the season even began. Everything he has done since the end of the 2012 season has been about protecting himself and getting to the free-agent market in the best possible condition.

He skipped OTAs without bothering to tell anybody he wasn't coming. He bailed on much of training camp to protect a groin issue he said he "wouldn’t even categorize it as an injury." He played very little in the four preseason games. During the regular season Nicks has not been the explosive play-maker he used to be. There was the incident where he took himself out of the Green Bay game. Now this.

Is he playing cautiously, protecting his free-agent value? Only he knows that for sure, but he certainly has left himself open to the question.

I am not ripping Nicks for missing Sunday's game. If he wasn't healthy enough to go, he wasn't healthy enough to go. Besides, head coach Tom Coughlin said "We made the decision not to play him," indicating it was not Nicks' call. Coughlin also indicated Monday that he never expected Nicks to play vs. Dallas because the wide receiver didn't actually practice during the week.

All I am saying it has been pretty obvious since before the season even began that Nicks already has one foot out the Giants' door.

I think I'm surprised Coughlin didn't know about his team's trash talk. The coach can't track every interview a player gives, nor can he prevent every dumb thing that comes out of a player's mouth. Aside from being surprised that veteran players don't know better than to say some of the things Giants' players said, I'm surprised no one in the Giants' PR Dept. clued the coach in that his players were verbally egging the Cowboys on.

I think I can't blame Cowboys' fans for stuff like this. Giants' fans have certainly had their fun with the Cowboys over the years. When you dish it out, you have to be able to take it. Which might also be a good thing for Justin Tuck to remember. 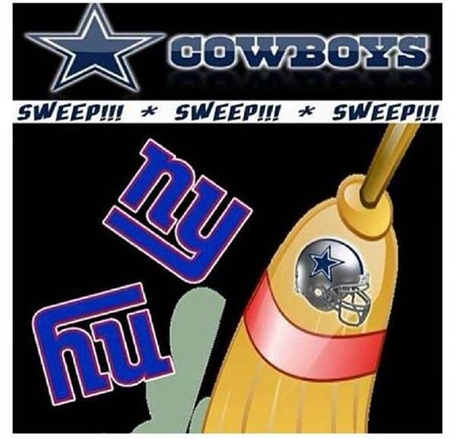 I think it's time to unleash 'DaMonster.' I honestly don't know if Damontre Moore, the third-round pick out of Texas A&M, is ready for prime time when it comes to playing significant snaps at defensive end. Moore has made some spectacular plays on special teams, and just as many -- if not more -- bone-headed ones. He has three special teams penalties this season. What I do know is the Giants are 4-7, they need to prepare for their future, and we have seen enough of Mathias Kiwanuka at defensive end this season to know he isn't part of it.

Kiwanuka is a stand-up guy, a leader and a spokesman in the Giants' locker room. He has unselfishly bounced between linebacker and defensive end over the years, probably to the detriment of his career. This season has made it pretty obvious, however, that the time when Kiwanuka could have been a dominant defensive end is gone. Kiwanuka's -18.7 Pro Football Focus score is the lowest on the defense, by more than 11 points. His two 15-yard penalties on Sunday were inexcusable. If he's going to play poorly, and take bad penalties on top of that, Moore has to start getting some of his snaps. That's what is best for the Giants' future -- and maybe their present.

I think the Giants were never going to the playoffs from 0-6. The ideas of making the playoffs from that spot was, and still is, something that has given a little hope and added some things to write about. Reality, however, is that it wasn't going to happen. NFL teams that lose six straight don't suddenly find ways to win nine of 10. The Giants' season pretty much blew up way back in Week 1 when they turned the ball over six times and gift-wrapped a season-opening victory for the Cowboys. The four-game winning streak was a nice interlude. The only question now is whether or not this will end up as the Giants' first losing season since 2004.