For the first time this season, there's a new No. 1 atop the Big Blue View Power Rankings. With the Broncos' loss to the Patriots on Sunday Night Football, the Seahawks -- who watched from their couches -- move into the top spot.

The Giants, winners of four straight entering Sunday, dropped their first game in a month at home to the Cowboys. The Cowboys and Eagles are now tied atop the NFC East standings, while New York dropped to two games back and have an ever rockier journey to make the playoffs.

Here are the Big Blue View Power Rankings for Week 13: 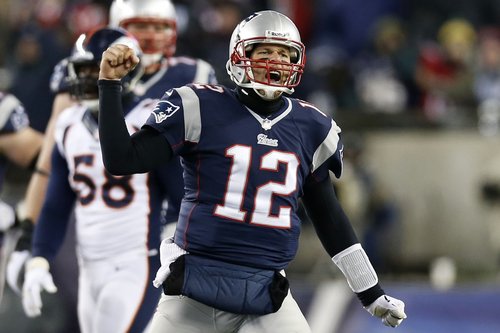 2. Denver Broncos (9-2): What a tale of two halves on Sunday night, as the ferocious Denver D was anything but that in the second half and overtime. (LW: 1)

3. New Orleans Saints (9-2): The Saints took care of business on the road, but they certainly didn't look sharp away from the Dome. (LW: 3)

4. New England Patriots (8-3): Welcome back to the top 5, New England. What a comeback for the Pats, who looked unstoppable on offense and defense in that second half. (LW: 6)

5. Carolina Panthers (8-3): This is the best ranking for Carolina this season. The Panthers are the league's hottest team, as they've won seven in a row, this week in comeback fashion. (LW: 8)

6. Cincinnati Bengals (7-4): The Bengals get San Diego, Indy and Pittsburgh in the next three weeks. Major playoff implications. (LW: 9)

7. Indianapolis Colts (7-4): The Colts have beaten the NFL's elite, but have dropped two games in a row, and have barely been competitive in either game. (LW: 4)

8. Kansas City Chiefs (9-2): Suddenly, the undefeated Chiefs have lost -- to divisional foes, nonetheless. And the injury to Tamba Hali could be detrimental. (LW: 5)

9. San Francisco 49ers (7-4): It seems like whenever the Niners have to win a game, they can. Then again, a lot of teams look very good against Washington. (LW: 10)

10. Detroit Lions (6-5): With Jay Cutler and Aaron Rodgers sidelined, the Lions had a prime chance to run away with the division. But they've dropped two in a row to opponents below .500 instead. (LW: 7)

11. Philadelphia Eagles (6-5): The NFC East leaders, Philly had a week to rest up, get healthy and prepare for the stretch run -- one that red-hot Arizona, Detroit, Chicago and a pivotal finale against Dallas. (LW: 13)

12. Arizona Cardinals (7-4): Winners of four in a row, the Cards knocked off the Colts in impressive fashion. Carson Palmer is looking comfortable under center, while this defense continually makes plays. (LW: 15)

14. Chicago Bears (6-5): Despite the loss to St. Louis, Chicago shares the division lead. Like with Rodgers and the Pack, Cutler's return could be the catalyst. (LW: 11)

15. Dallas Cowboys (6-5): The Cowboys' second win against the Giants has kept them alive for the division title. (LW: 14)

17. San Diego Chargers (5-6): Philip Rivers will lead the Bolts into a handful of pivotal AFC showdowns in the coming weeks -- against the Broncos, Bengals and Chiefs. (LW: 20)

18. Pittsburgh Steelers (5-6): Don't count out the Steelers just yet. They've won three straight and could bypass the defending champs on Thanksgiving. (LW: 21)

19. Tennessee Titans (5-6): Ryan Fitzpatrick has filled in well for Jake Locker -- so much so that Tennessee currently holds a wild card spot (LW: 23)

20. St. Louis Rams (5-6): We thought the Rams' season was over when Sam Bradford went down, but this defense and the emergence of Tavon Austin has the Rams knocking off contenders on a weekly basis. (LW: 22)

23. New York Giants (4-7): The Giants fell back to reality with a last-second loss to Dallas. This is definitely not a playoff-caliber club. (LW: 17)

32. Houston Texans (2-9): Welcome to the bottom of the cellar, Houston. Perhaps Teddy Bridgewater is in your future. (LW: 28)