The Giants face the Dallas Cowboys Sunday at MetLife Stadium in Week 12 of the 2013 NFL season. New York will be seeking its fifth straight victory. Here is how to watch the game, the TV channel, radio and online streaming information, odds, the schedule, game time, announcers, injuries and more.

Can the New York Giants keep their improbable, unprecedented playoff dream alive? The 4-6 Giants, winners of four straight after an 0-6 start, face the Dallas Cowboys (5-5) Sunday at MetLife Stadium in a critical NFC East game.

The Giants are trying to keep alive their dream of becoming the first NFL team to reach the playoffs after starting a season 0-6. To have a realistic chance they need a victory over the Cowboys on Sunday. 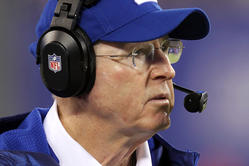 "We’re very much aware of having dug ourselves a very, very deep hole, have started to make a little bit of progress to get out. It’s nice that we do have a challenge of this nature. We call it an opportunity," said Giants coach Tom Coughlin. "This is what you play for. You play for this, you play for the opportunity to be in games that are important."

The Cowboys and Giants are both chasing the 6-5 Philadelphia Eagles, who have a bye this week.

"Unless you’re running off and going 15-1 or 14-2, I think most divisions are going to always come down to the final three games or so anyways. So that part of it is just going to happen. It’s the National Football League," said Dallas quarterback Tony Romo. "The Giants have good players over there. They have a very good defensive front, some really good players that are playing well. It’s going to be a great test for us. We just think you’ve got to put your head down, go to work and win football games and we’ll see what happens."

Dallas defeated the Giants, 36-31, in Week 1. The Giants committed six turnovers in that game.

Odds: The Giants are 3-point favorites

Seven of the last nine Giants-Cowboys games have been decided by eights points or less (one score) ... Romo has a 117.7 passer rating with 12 TDs and only three interceptions in his last four starts against the Giants ... Eli Manning has won six of his past nine starts against the Cowboys with a 97.2 passer rating ... The giants are the second team in NFL history to win four straight games after starting a season 0-6. The Tennessee Titans won five straight after an 0-6 statrt in 2009.

"Personally, I feel like this game is going to determine the outcome of the season. I think this is such a huge game, being they've already beaten us once. I think this is a game, we can't walk away with a loss."
-- Antrel Rolle

"No doubt we're gonna win this game. You can tell 'em, put it on the bulletin board, doesn't matter."
-- Terrell Thomas