Weather for Giants-Cowboys? Cold, but not exactly frightful

Will the weather impact Sunday's game between the Giants and Cowboys? It is expected to be cold and blustery at kickoff.

Share All sharing options for: Weather for Giants-Cowboys? Cold, but not exactly frightful

New York Giants' running back Andre Brown says he has "never played in the snow so that would be fun" if it were to happen Sunday during the Giants' game at MetLife Stadium Sunday vs. the Dallas Cowboys.

Well, sorry Andre. It is not supposed to snow in East Rutherford on Sunday. It is supposed to be miserable, however. The high temperature for the day is likely to reach only the low 30s, and will likely settle somewhere in the 20s with kickoff at 4:25 p.m. ET. There is only a slight chance of precipitation. Winds are expected to gust anywhere from 15 to 20 miles per hour.

'Hopefully Dallas won't like it being cold.' - Andre Brown

Giants' head coach Tom Coughlin said he will "pay attention" to the weather forecast, but otherwise didn't seem want to make a major issue out of the possible conditions.

"I like playing. I like the idea of us competing and whatever the weather is, we have to play in it. That's the way our approach has always been," Coughlin said on Friday. "Do the best we can and hopefully we're a team that is more familiar with some of the weather situations that occur, normally it's after Thanksgiving, but it will be this weekend in this part of the world. The run game, the physical aspect of the game does come to the front when the weather is like that."

"I just know that I'm going to go out there prepared and ready to go. No matter if it's cold or hot or warm, I'm just going to be ready to go," Brown said. "Hopefully Dallas won't like it being cold. Us being used to the cold weather could be an advantage but it is what it is."

Weather in New Jersey -- and its impact on games -- is a major concern with MetLife set to host the first-ever cold-weather outdoor Super Bowl on Feb. 2, 2014.

The graphic below, also courtesy of the MetLife 'Road to MetLife Stadium' program and using data from STATS LLC, gives us some indication. 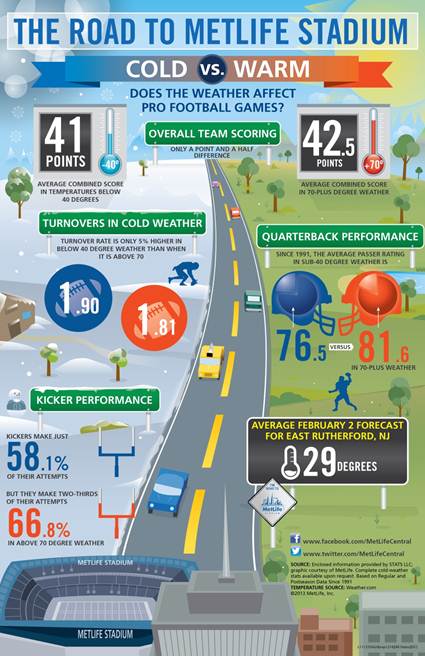 What we see is not nearly as much impact on scoring, quarterback performance or turnovers as you might originally think. We do, however, see a drop from 66.8 percent field goal accuracy when temperatures are above 70 degrees to 58.1 percent when temps are below 30 degrees. Data is from 1991 forward.

The data does not, however, account for wind, rain and snow. Those, more than the temperature, seem like the weather factors that could really impact performance.