An in-depth look at New York Giants' rookie RT Justin Pugh, and his development through Week 11.

"They better not draft Pugh!"

That was the general (and one specific) reaction when the New York Giants selected offensive tackle Justin Pugh out of Syracuse at No. 19 overall in the 2013 NFL draft. The first five reactions are from right here at Big Blue View. The final quote is the immediate reaction of the NFL Network's Mike Mayock, who called the pick like Babe Ruth calling a home run.

And while Mayock loved the pick, the last time BBV was that livid about a draft choice, it was 2010 and Jerry Reese had just taken Jason Pierre-Paul 15th overall.

That season JPP started out slowly but gained traction as the year went on. By the end of the 2010 season, JPP was well on his way to becoming one of the most dominating defensive players in the NFL.

Will the 2013 season once again prove Reese correct and hand those of us at BBV (another) heaping helping of crow?

The various numbers and analytics show a promising trend, but let's take a look at the film.

As head coach Tom Coughlin is wont to say, the Giants want to run the ball and play great defense. Historically, run blocking has been the chief duty of a right tackle. To start this section off, we'll take a look at Pugh's first regular-season opponent (and not exactly coincidentally his next): the Dallas Cowboys. 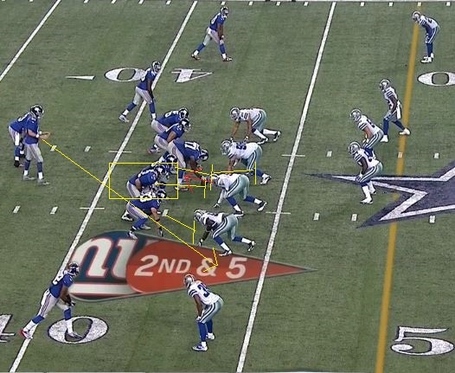 The Giants start out in the shotgun with Da'Rel Scott next to Eli. Pugh is highlighted in the yellow box. He and Chris Snee are first responsible for double-teaming the 3-tech (No. 92) at the point of attack while Brandon Myers is responsible for the DE. 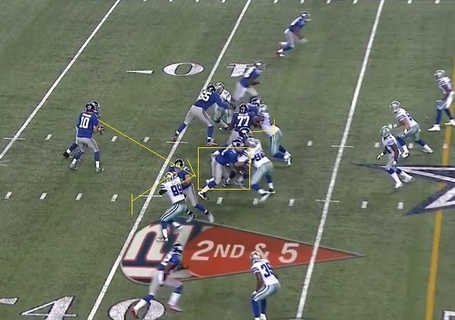 In this next image we see Pugh (he'll always be highlighted in yellow) and Snee engaged with the 3-technique while Myers ushers the DE out of the way as Scott takes the hand-off. Looking at Pugh, you can see his hands in decent position and his pad level lower than the DT's. He's leaning forward a bit as he and Snee move the DT. 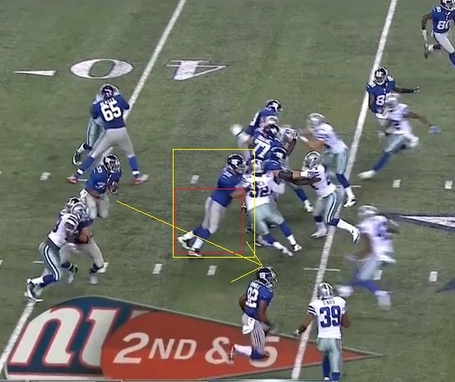 Moving ahead a bit, you can see that a nice hole has been opened up for Scott, although a linebacker is coming down to fill it (it's Scott's responsibility to make him miss or break an arm tackle). On the outside, Myers has moved the DE well out of the way. On the inside, Snee is moving on to take the other DT while Pugh seals the 3-tech. I highlighted Pugh's lower body here. Where he kept a pretty good base in the previous image, here he's fully extended with his weight well forward of is feet. He's basically leaning against the DT. Also note how close together his feet are. 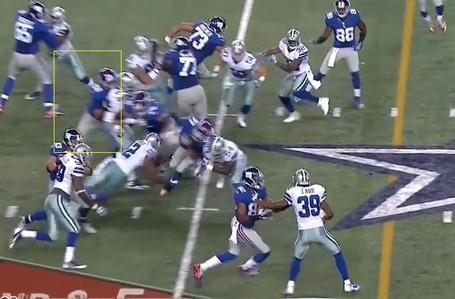 In the final image, we see Scott finishing the run while Pugh holds his block on the DT.

I chose this play in particular because it was a run behind the right tackle. There weren't many of them this game. The Giants ran almost exclusively behind Will Beatty and James Brewer (left tackle and left guard, respectively). And looking at a close breakdown of Pugh's technique here, it's pretty easy to see why: It would qualify as "good enough", based purely on the play's positive gain. However, Pugh allowed himself to lose all leverage and his ability to generate power. Using this technique he just wouldn't move a defensive lineman off the LOS. He kept the DT out of the backfield, but not much more than that.

So let's fast-forward to Week 11 and see if Pugh has improved his run blocking any. 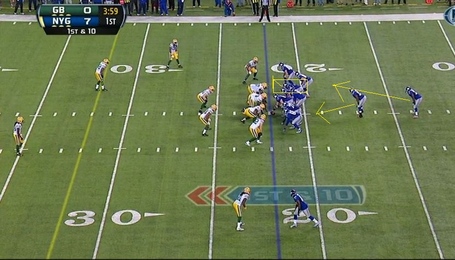 Here we see the Giants lined up in a Power I formation, with John Connor at fullback and Andre Brown at running back. Once again Pugh is highlighted in yellow. This play he is blocking the 5-tech or 3-4 defensive end. Let's move on and see how the play develops. 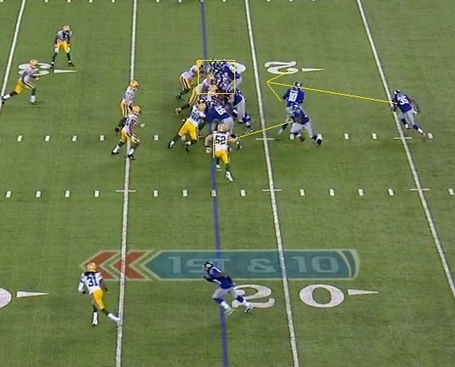 After the snap we see Pugh engage with the defensive lineman and Connor moves to block the linebacker (Clay Matthews), as Manning drops back to make the hand-off to Brown. It's a bit difficult to see thanks to the camera angle, but you can see that Pugh's back is straight, his hips are sunk while his knees are bent. He's in a great position to have leverage on the DT and push him out of the way, or at least control him. 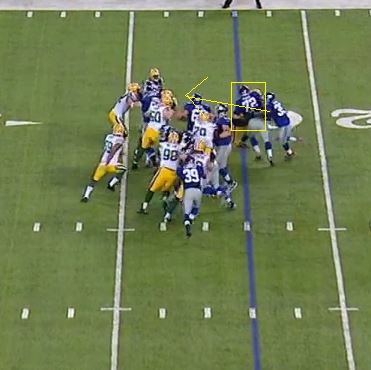 In the final frame here, we see Pugh sealing off the DE to create a hole for Brown to run through. His hips are low and he is able to control his assignment with good leverage and power.

This wasn't a big play. It was a hard-fought run by Brown, but a nice 1-on-1 block by Pugh. It shows his development as a blocker, both technically and mentally. Pugh is attacking his man and finishing the block with power and leverage.

When Pugh was drafted out of Syracuse, he was playing left tackle. As a left tackle, who protects the quarterback's blindside, his forte should be pass protection ... But is it? 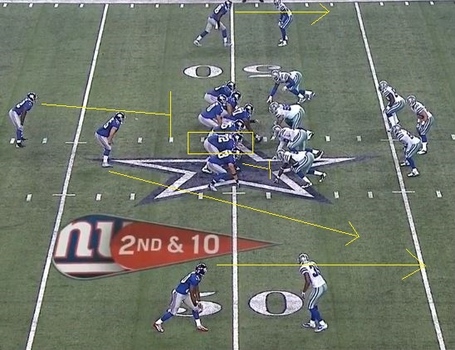 Here we see the Giants in an off-set I formation. It's a play-action pass, with the fullback going into the flat while the running back comes up to block. Pugh is assigned to block the LDE. 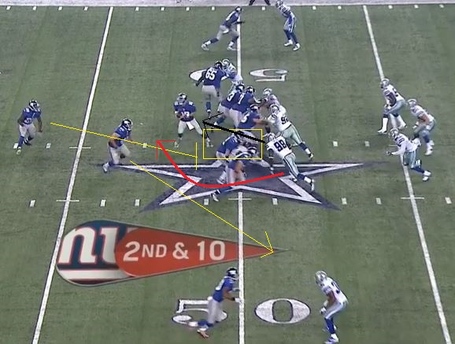 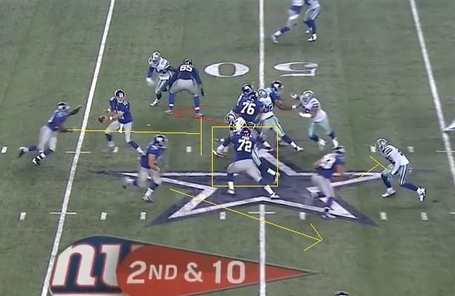 Here we see the DE has not just beaten Pugh, but absolutely burned him with the inside rush. He is past the line of scrimmage before Eli can even fake the hand-off. We can see Eli's head turned and he sees that the DE has soundly beaten Pugh and he won't have much time, even if the chip block is successful. On the outside we can see Myers stepping up to block the LB while Hynoski makes his move into the flat. 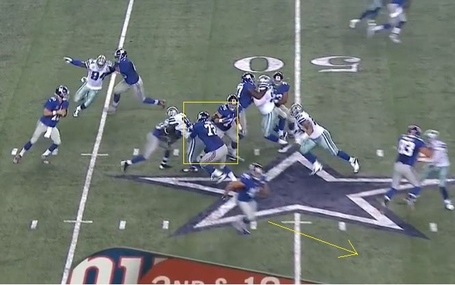 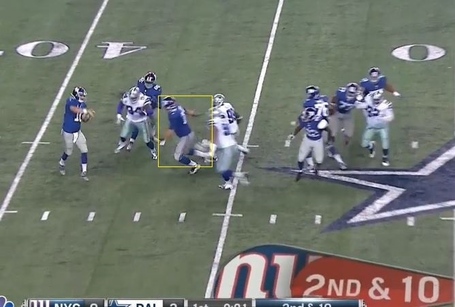 In the final snapshot from this play you see Eli get the pass off. Pugh still has his back to the line of scrimmage. The pass goes to Hynoski in the flat, That doesn't really matter as Hynoski drops the pass.

Showing this play almost isn't fair to Pugh. It is (hopefully) one of his worst snaps all year. It shows him making just about every rookie mistake an offensive lineman can make. He completely whiffs on the block, gets beat, panics, and completely turns his back on the defense. Just horrible.

But, that was in September. Let's see how he's doing come November. 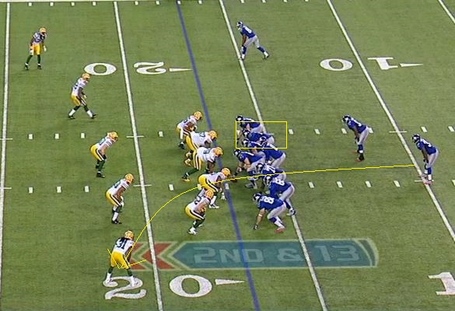 Once again we see the Giants in an offset I formation. Conner is the fullback, Brown is the running back. Pugh is assigned to block the outside linebacker 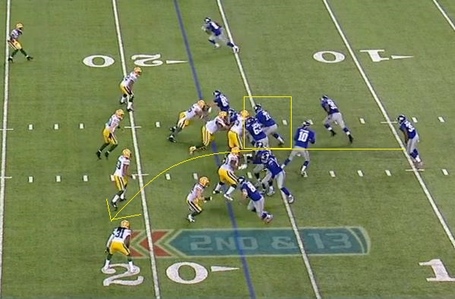 In the next image we see Pugh has smoothly transitioned back into his kick-slide. If you look at his lower body, his hips are sunk, his ankles and knees are bending nicely. His shoulders are roughly parallel to the line of scrimmage and his hands are up and active. 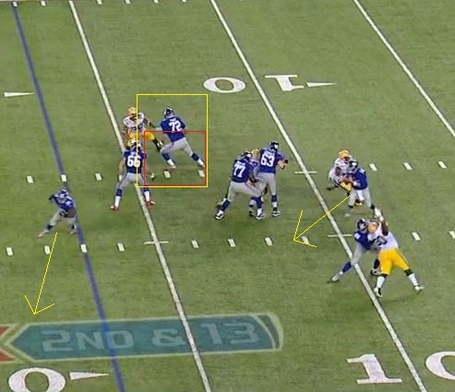 Here we see Eli stepping up into the pocket as the back comes across the field. At the top of the screen, Pugh is mirroring the OLB, keeping him well away from the play. Pugh's hands are active, his lower body is controlled and athletic, and he is staying composed in general. 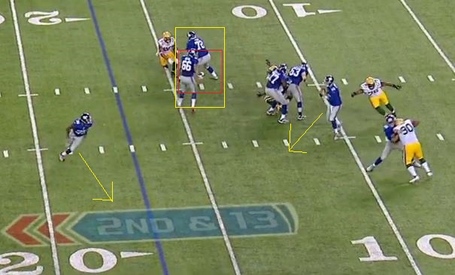 Eli has successfully escaped the rush while Brown comes back for the ball. Up top, Pugh continues to sustain his block and mirror the LB, keeping him out of the play. Looking at the red box, Pugh's technique is about as close to text-book as you're going to see in a live game situation. 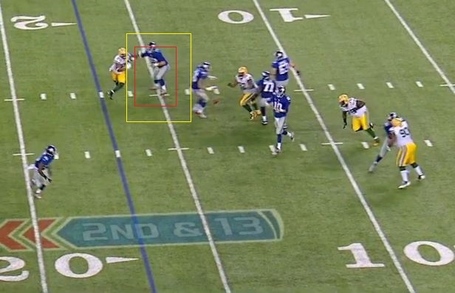 In the final image from this play, Eli has the ball on its way to a wide-open Brown (who makes the catch). Pugh is continuing to mirror his defender with excellent technique.

In this play we can see just how far Justin Pugh has come in 10 games. He is maintaining his composure and trusting his coaching, technique, and athleticism. His footwork is really excellent, which allows him to mirror and stay with a much smaller defender. Likewise, he is doggedly staying with his defender through the whistle.

Despite the pick being hated at the time, Pierre-Paul went on to become an absolutely dominant defender by his second season in the NFL. The selection of Pugh was loved about as much as the Giants 2010 first-round choice. Will he become a dominant player like his teammate? Nobody can say right now.

The stats say that Pugh is rapidly improving as an NFL offensive tackle.

Another player quickly rising, Justin Pugh. After a horrid start, Pugh has now graded positively in pass protection in four out of his last five games, including a +1.5 this week in which he allowed a single QB hurry.

His game tape is certainly backing that up.

Pugh's pass blocking is improving by leaps and bounds. And while he will likely never be confused with a road grading mauler of a right tackle like Kareem McKenzie, Pugh's run blocking is coming along as well.

Though Pugh's career is still in its infancy, early indications are that Reese has once again served up a helping of first-round crow.