Giants vs. Cowboys: When Dallas has the ball

A look at the matchup between the New York Giants' defense and the Dallas Cowboys' offense.

Share All sharing options for: Giants vs. Cowboys: When Dallas has the ball

New York Giants have won four straight games, a streak that coincides with a defensive revival. After surrendering a league-worst 36.4 points per game in their first five games, the Giants have given up just 11.4 points per game during their winning streak. Only two of the five touchdowns allowed by the Giants during that time were given up on defense -- one was a pick six, one was a punt return and the other was the result of an errant punt snap.

'We know full well what Tony Romo has been able to accomplish.' - Tom Coughlin

The Giants have heard the talk that their defensive dominance in recent weeks has less to do with their own play than it does with the sub-standard quality of the quarterbacks they have faced.

"People can say we haven't faced the best quarterbacks, but we don't get much props for shutting down the top running backs, either," said middle linebacker Jon Beason. "To me, it all depends on how you want to spin it. Guys are going to say you haven't played anybody, but we know how hard it is to win in this league. A 'W' is a 'W'."

Here is what the Giants have done this season against top-flight running backs:

"We're looking forward to playing the game. We know full well what Tony Romo has been able to accomplish and he's having an outstanding year," Giants head coach Tom Coughlin said. "We have our work cut out for us, but these games have a way of being tooth and nail and they go right to the end and we're looking forward to the challenge."

Let's look back at what happened in Week 1 and how things might look different this time around.

The Giants' 36-31 loss began a season-opening streak of five straight games in which the Giants surrendered 30 or more points. Thing is, the defense really isn't to blame for this one. Dallas got 14 points directly off turnovers, with Barry Church returning a David Wilson fumble 27 yards for a score and Brandon Carr returning a screen pass that bounced off the hand of Da'Rel Scott 49 yards for another touchdown. The Cowboys also got three points after an Eli Manning to David Wilson screen pass was intercepted by DeMarcus Ware at the Giants' 15-yard line.

The Cowboys held the ball for 37:10 in this game, as much because the Giants couldn't hold onto it with six turnovers as because of anything Dallas did offensively.

Romo had an efficient game for Dallas, going 36-of-49 for 263 yards with two touchdowns and one interception. Wide receiver Dez Bryant had four catches, but wasn't Romo's primary target. Miles Austin caught 10 passes, and Jason Witten and DeMarco Murray each caught eight.

The Giants really didn't hint at the defensive struggles to come in this game. They got two sacks and Murray ran for 86 yards. Overall, the defense received a +10.3 grade from Pro Football Focus in this game. 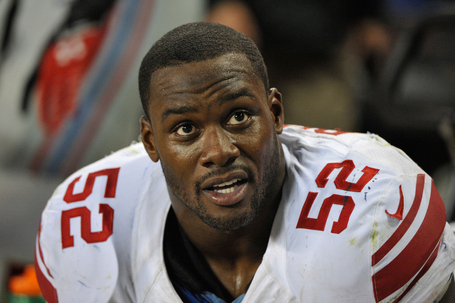 Romo will be looking across the line of scrimmage at a defense that has undergone a transformation since the Week 1 encounter.

Much of the change in the Giants' defense can be traced to the Week 5 trade for Beason. The former Carolina Panthers' Pro Bowler took over at middle linebacker in Week 6 and has provided leadership and play-making ability the Giants have not had at the position since the heyday of Antonio Pierce.

There are other changes, as well.

Jacquian Williams has taken over at weakside linebacker for Spencer Paysinger. Will Hill has usurped Ryan Mundy at one of the safety spots. Both new starters are faster and more athletic than the players they replaced. Trumaine McBride has become the starter at left cornerback, taking advantage of injuries to Corey Webster and Aaron Ross. McBride, however, is now dealing with a hip flexor -- possibly opening the door for Webster to see some playing time Sunday if he is healthy enough.

Jason Pierre-Paul, the Giants' best defensive player, should also be more of a factor this time. In Week 1 Pierre-Paul was seeing his first live action since back surgery. Now, he is coming off being named NFC Defensive Player of the Week. 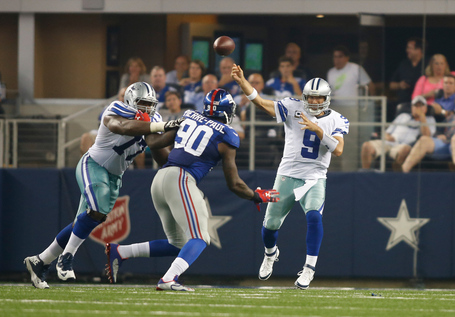 Jason Pierre-Paul vs. Tyron Smith. The Giants' extraordinary defensive end, looking increasingly in recent weeks like the All-Pro player the Giants need him to be, will be lining up across from Smith, Dallas's talented young left tackle. Smith has allowed only one sack and three hits on Romo all season. Two of those three hits, incidentally, came against the Giants in Week 1. If Pierre-Paul can be disruptive while matched against Smith, possibly forcing the Cowboys to resort to helping Smith, that would swing a huge advantage to the Giants. If Smith can keep JPP quiet by himself, advantage Dallas.

Prince Amukamara vs. Dez Bryant. Raise your hand if you expect the Giants to have Amukamara shadow Bryant all over the field on Sunday. I know I do. Amukamara, in his third season, is drawing increasing praise for his play and is now clearly recognized as the Giants' best corner. There is no way I see the Giants allowing the 5-foot-9, 185-pound McBride, or Webster, who has barely played since Week 2, to cover Bryant if they can help it. This job needs to fall to Amukamara, and it is his chance once and for all to show whether or not he belongs in the discussion when it comes to the league's elite corners.

Jason Witten vs. whoever covers him. That responsibility might fall to Williams. It might fall to Will Hill. It might fall to Jon Beason at times. It could even fall to Antrel Rolle or slot cornerback Terrell Thomas. In all likelihood it will fall, in part, to all of them during the course of the game. Witten, a perennial Pro Bowl tight end is always a security blanket for Romo and a thorn in the side of the Giants. I really don't know who is going to do it, or how, but somebody needs to keep Witten from dominating the middle of the field.